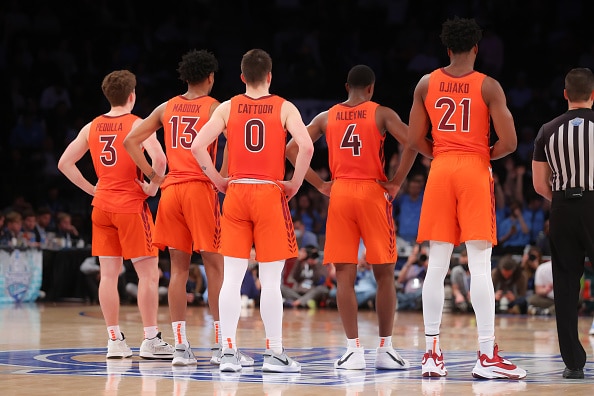 CBB Review hands out awards for each conference tournament in 2022. Up next: The ACC Tournament.

Virginia Tech won its first-ever ACC Tournament championship, thwarting any hopes Duke had to send Coach K out with an ACC title. Hunter Cattoor dropped 31 points to lead the Hokies to an 82-67 win over the top seed.

It was a wild ride for Virginia Tech, barely making it out of the first round against Clemson, and then knocking off the top three seeds in the tournament, not in close games either. The Hokies beat Notre Dame by seven, UNC by 13, and heavily favorited Duke by 15 to claim the school’s first ACC basketball crown.

Cattoor wins the ACC Tournament MOP for his efforts in tonight’s championship game. The sharpshooter knocked down seven of his nine three-point attempts, posting a game-high 31 points.

Keve Aluma deserves a shoutout for his consistent play, but Cattoor was lights out, giving Va Tech the lift it needed to take down the heavily favorited Blue Devils and take his team off the bubble and into a guaranteed bid.

Virginia Tech will go as far as their shooters allow them to. Throughout the ACC Tournament, the Hokies shot an impressive 42.7% from beyond the arc, which is a great formula for success no matter the opponent.

Virginia Tech has the capabilities to defend well and move the ball, but some of their weaknesses were shown early on in this tournament, narrowly escaping a subpar Clemson squad on a prayer. There is no doubt Mike Young’s squad is rolling, but the question remains: how far can they roll?

The NCAA tournament could very well look like this for Va Tech. They ride the momentum through the first weekend, cool off shooting due to some time off, and get knocked out by a team with a substantially more talented roster. Mike Young is a tremendous coach, and the Hokies could stay hot at the right time and make a deep run, but with the seeding, they will likely receive, it is tough to predict them winning a game in the second weekend.