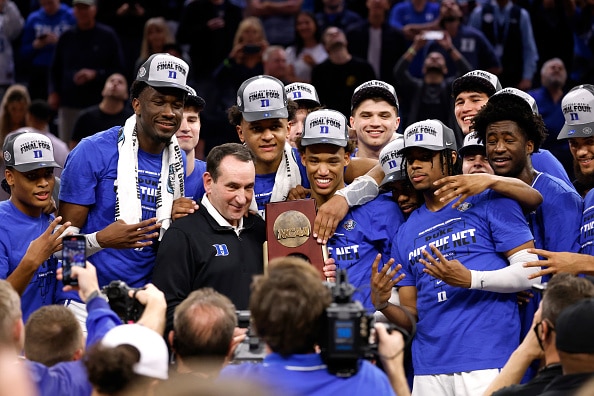 Duke and UNC are playing in perhaps the most hyped-up Final Four game of all time.

It was almost destiny. Mike Krzyzewski’s final regular-season game was spoiled by North Carolina marching into Cameron and stealing a victory. But Coach K has a chance for the ultimate revenge as the two most heated rivals meet in the biggest stage, the Final Four. You’ve probably heard this story everywhere though. So let’s dive into the actual gameplay and what it would take for each team to advance in the third round of Duke vs UNC.

1. Hot Shooting Nights From Both Caleb Love and R.J. Davis

Both of these guards have had spurts of dominance throughout the tournament. For Love, it was the UCLA game in the Sweet Sixteen, where he accounted for 30 points on six three-pointers. Davis was most prominent against Baylor in the Round of 32, where he had 30 points and six assists of his own. Both are high volume and efficient shooters, but just like every other player in the country, they are streaky. If Love is starting to hit his shots from the logo and Davis is just as lethal off the catch, UNC will be in a full force that we haven’t even seen yet.

2. Execute the Pick and Roll

In both previous matchups against Duke, Hubert Davis emphasized the pick and roll. According to Shot Quality, the Heels have used this play design on about 30% of possessions in these two games, compared to a season average of 19%. The idea is to keep Duke’s Mark Williams out of the paint as much as possible. When Armando Bacot sets a high ball screen, Williams would hedge enabling Bacot to slip down low for an easy dunk.

3. Brady Manek is a Sniper First

The reason I keep bringing it back to perimeter offense is that Duke’s weakness down the stretch has been allowing open three-point shots. Manek is a unique player because of his ability to play around the rim like a true power forward but effortlessly pop out for a three. Among the 68 teams that made the tournament, Manek shoots threes at a higher rate than any other forward with 11.9 made shots per 100 possessions. But once again, this goes back to pulling Williams out of position. He was awarded ACC Defensive Player of the Year for his rim protection so it will be critical that North Carolina finds was to create downhill driving space.

1. Treat Your Number One Weapon as Such

Yes, there have been a couple of times this year where Paolo Banchero shot Duke out of games but since the NCAA Tournament has started, he has figured out how to play like the top NBA Draft pick he is. When his arsenal consists of that right-hand drive to the rim and fade away over the left shoulder, that is when the three-point shot opens for him. Not vice versa!! Banchero is the best iso player in the country and Manek will certainly have his hands full. Especially with Leaky Black likely following A.J. Griffin everywhere, Duke must trust their best matchup and their best player.

The offensive glass isn’t a staple for Hubert Davis as it was for Roy Williams but second-chance opportunities and put-backs remain critical for Armando Bacot and UNC’s success. On the contrary, UNC is second in rebounding on the defensive end. If Duke wants to sustain the Heels for 40 minutes, Mark Williams has to match Bacot’s physicality and utilize the height advantage that he does have.

3. Don’t Be Afraid to Utilize the Zone

Throughout Coach K’s career, Duke has been a predominantly man-to-man defensive team. At times this year, however, we have seen them resort to a zone, particularly in tight spots late in games. Let’s take the Sweet Sixteen game, for example. At first, Duke was able to get a few consecutive stops, until Texas Tech figured out how to use this to their advantage. They utilized various cutting concepts to get uncontested layups. So Duke’s zone is successful in smaller measures rather than long stretches of time. But if UNC’s goal is to pull Williams from the interior, the 2-3 is certainly something to mix into Duke’s defensive sets.

One thought on “Duke vs UNC: Three Keys To Win”