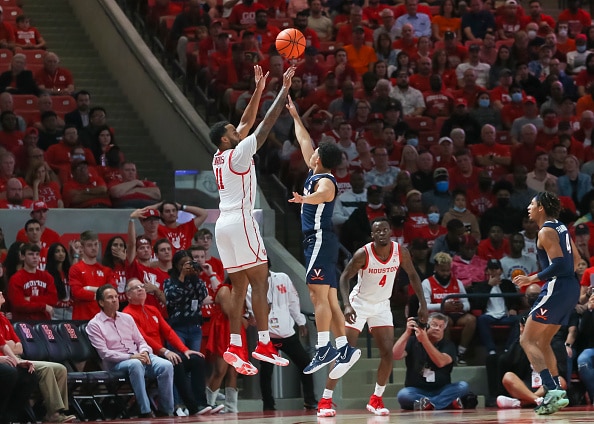 The Cougars of Houston basketball came out of the gate hot, going on a 10-2 run before the first media timeout. This pace would not slow, as they piled on points and suffocated the Cavalier offensive attack. Houston led by 13 at the half, eventually winning by 20. Virginia converted only two field goals in the opening eight minutes of the second half.

Marcus Sasser led the scoring for Houston basketball, putting in 19 points, with his teammate Kyler Edwards adding 18 of his own. For Virginia, Armaan Franklin was the only player to reach double figures, scoring 11.

Houston holds Virginia to under 50 points and stays perfect on the young season. pic.twitter.com/3qJr7sU0x4

The Cougars passed both the eye test and the numbers test on the defensive end of the ball. A usually well-disciplined Virginia offense turned the ball over 17 times, which lead to 14 points for Houston. Kihei Clark was tightly covered all game, forcing him into bad passes and shots. But most importantly in the win, the Houston defense held Jayden Gardener to just four points after averaging 18 in his previous two contests.

Although Virginia is not nearly as talented on offense this season compared to previous years, Houston forced them to speed up their normally slow pace of play and make ill-advised plays. They also made great adjustments throughout the game, including going on top of screens against Clark after he made two shots from beyond the arc. Clark did not score in the second half.

A starting lineup of Kihei Clark, Armaan Franklin, Jayden Gardener, Kadin Shedrick, and Reece Beekman does not exactly scream out offensive powerhouse. That is not what is expected from any Tony Bennett team. But the Wahoos should never be losing games by 20, especially when the opponent scores below 70 points.

This offense looks lost. Kihei Clark has been forced to go outside his comfort zone, operating and creating on offense. Jayden Gardener, despite having a nice first two games, scored only four points against a tough defense, not hunting out his shot. It seems as though no one wants to take control on offense, leading to bad passes and even worse shot selections. Tony Bennett has moved back to primarily mover-blocker on offense, which really is not a great offense for a team shooting 37% as a team from behind the bonus sphere.

Takeaway #3 – The three-pointer will win games for Houston basketball

As poorly as Virginia looked on offense, Houston put this game out of reach with the long ball. The Cougars started 5-6 from beyond the arc, jumping out to an early 23-12 lead. Edwards and Sasser exploded for a combined 9-13 from three. Even without the top defense, Houston can win a lot of games if they shoot that efficiently all season. If the offense and defense play at the level it did today, Houston is the clear American favorite and realistically can get another shot at a title this March.

Virginia looks to bounce back Friday when they host Coppin State

Houston has a nice six-day break before they face off with Butler in the Maui Invitational on Monday.