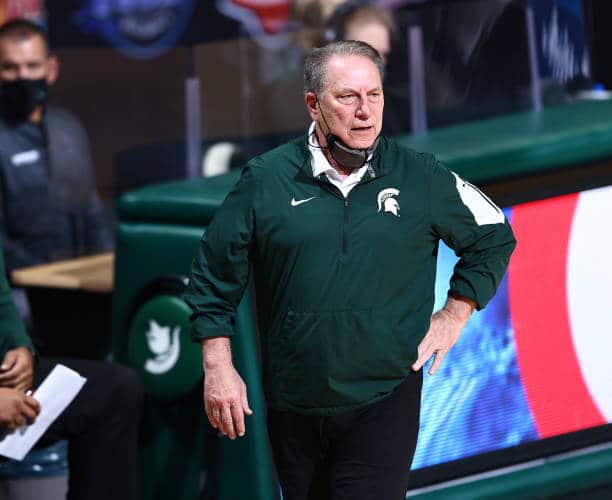 College basketball fans tend to get antsy and these teams are coming off of years not quite up to par.

One of the beauties of college basketball is the parity each season brings. Unlike college football, even the best and most consistent programs are more susceptible to having an off-year.

Last season, COVID-19 brought upon many unique challenges that every team in the country had to face and probably will never see anything else like it in the future. However, fan bases still won’t forget a season and coaches and players are ready to move on and get back on track.

These college basketball teams either had a season that didn’t quite equal the prestige of the program or has been trending down and impatience is brewing for a winning season.

The Bobby Hurley era started slowly but brought the Sun Devils two consecutive NCAA Tournament appearances and a program-tying record No. 3 AP Poll ranking. However, ASU evened out again in 2020 and plummeted below .500 last season.

Heading into year six of the Hurley experiment, the buzz around the program is starting to get a bit worrisome. The Sun Devils have some talent on their roster, but anything less than a 20-win season might put Hurley on the hot seat.

Wes Miller comes in to replace John Brannen as the Bearcats look to re-start and re-group. Although Cincinnati didn’t have a losing record, they were barely a touch above .500 and now await a move to a much tougher Big 12 conference.

There is still some time in the American and this season would be a good one to start for Bearcats basketball to get back to its postseason ways. They haven’t made an NCAA Tournament since 2019 and that needs to change for the 12th most winningest program in college basketball history.

Two losing seasons in the last three campaigns and no NCAA Tournaments to show for since 2017 have Irish fans not as complacent with Mike Brey as they were five or six seasons ago.

The switch to the ACC hasn’t been the problem. Notre Dame made back-to-back Elite 8’s in 2015 and 2016. Brey landed 2022 4-star rated recruit J.J. Starling on Tuesday but he can’t afford to wait until Starling comes to South Bend. This season is a crucial one for Brey and the Irish.

I’m a little more lenient on the Wildcats given it can be very challenging for a coach to get a whole group of guys with their minds focused on the NBA to come together for a college basketball season. So when Kentucky goes 9-16 in a year where senior leaders were a blessing during the uncertainty COVID provided, UK gets a bit of a free pass.

With that being said, having all that talent each year with zero Final Fours since 2015 and a solo National Championship a decade ago in 2012 has the Kentucky fanbase a bit unsettled. The Wildcats would not only benefit from having more wins than losses this season but also a deep run into April.

If Jim Boeheim is reading this article I’ll take the blame before you need to put it on me. After a win against Pittsburgh in 2017, the Hall of Fame coach took to reporters to say that his five best seasons were his five Final Four appearances with Syracuse. In other words, post-season play trumps any regular-season achievements. Last season, the Orange snuck into the NCAA Tournament but caught fire on its way to a Sweet 16 run.

I obviously didn’t learn, but from a fan-bases perspective, it is nice to have a good regular season and earn a good seed in the NCAA Tournament. It’s hard to believe Syracuse hasn’t had a 4-seed or better since 2014 and I’m sure no coach would be upset about having that type of a regular season. It’s long overdue for the Orange and this could be the year.

The Hoosiers have one of the best big men in the country in Trayce Jackson-Davis yet finished 12-15 in 2021. Now, the Big Ten is arguably the toughest conference in college basketball, so even with some unique talent, it’s difficult to win games when every other competition is against a nationally ranked opponent.

Mike Woodson comes in as the new head coach and Hoosiers’ nation is ready to get back to its heyday. The process could take a few years, but Indiana is one of the most restless programs in college basketball to get back to being dominant.

While not the first team that comes to mind when you think of college basketball powerhouses, Kansas State is still a storied program. 31 NCAA Tournament appearances and four Final Fours are no slim numbers. However, the past two seasons have been a total dumpster fire.

In the past two seasons, the Wildcats have had just nine Big 12 wins and non-conference losses to Bradley, UNLV and Division II Fort Hays State. The turnaround needs to come soon or else K-State may be in some deep trouble.

With Roy Williams out and Hubert Davis in, a lot of people seem to have forgotten about the recent troubles in Chapel Hill. 18-11 last season and a losing record the year before are not close to what North Carolina basketball should be.

Davis has been great in his first offseason as head coach even if the Tar Heels have established a great brand that is fairly easy to recruit to. However, Tar Heels fans won’t be patient for a two or three-year process. They want to win NOW and that’s going to mean a 25-win season and at least advancing to the second weekend of the Big Dance.

The Tigers are the lone team on here that has actually been consistently good by most standards. However, with the hype that Penny Hardaway has come in with, Memphis has sort of disappointed. The James Wiseman experiment failed and they likely wouldn’t have been a tournament team even if COVID didn’t cancel it.

Last season, Memphis had some great moments but this year they’ll need to live up to all the hype around them. The overall recruiting class is the best Penny has had and with some veteran presence, anything short of a 5-seed would legitimately qualify for a failure. The AAC is all of Memphis’ for the taking, so they need to dominate all season long.

Washington was the worst power-six team in college basketball, finishing last season 5-21 overall. I wouldn’t blame it all on COVID either, because the Huskies were just 15-17 the year prior.

Mike Hopkins has recruited well but the results have yet to show. He did have a near 30-win season in year two, but now entering his fifth season, Hopkins has got to find his stride. The Pac-12 is a fight at the top, but the middle of the pack and bottom-tier teams can try and separate themselves throughout the season. Washington is one of those teams at least in the preseason, so it’ll be up to Hopkins to coach them into the top half of the conference.

Michigan State basketball came into 2020 with loads of expectations and didn’t come close to fulfilling them, losing in the First Four. This year, the buzz in East Lansing isn’t quite as noisy, but trust me, once we hit November, Spartan-town will focus its eyes on basketball.

Tom Izzo has done it before after coming off a not-so-hot season. However, last year was possibly one of his worst seasons to date, so of course, it will raise it bit more concern than usual. The Spartans are used to winning, so Izzo is going to have to deliver.

No team has come close to being as bad as the Pittsburgh Panthers have over the last five years, with not one winnings season to boast about. This is coming off a 15-year stretch in which Pitt had 13 NCAA Tournament appearances, reaching the Sweet 16 or further in five of them.

Jeff Capel was supposed to be the guy but now the questioning has begun. For coaches on the hot seat entering the season, Capel’s chair is easily the warmest with the thermostat ready to crack. Pitt can start slow, but it must start with a winning season. 17 or 18 wins and the Panthers are at least back on track.