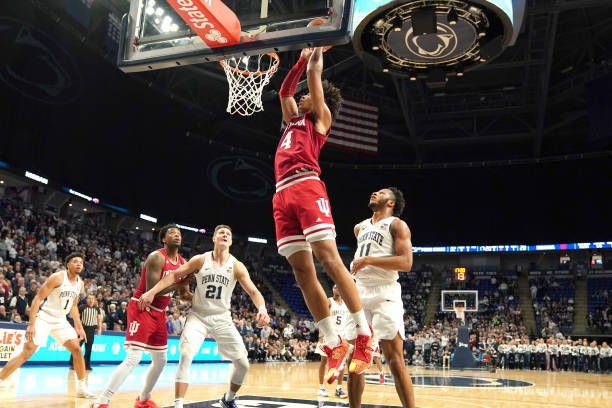 First-year Indiana basketball coach Mike Woodson said only no starters are in-stone besides Trayce Jackson-Davis. Don’t worry Hoosier nation, we have a lineup for you!

Xavier Johnson may have some great point guard attributes, but Rob Phinisee held that job for the Hoosiers the last three seasons. Unless Woodson is going to come in and completely overthrow the ship, Phinisee is the right man for the job.

He’s been short of spectacular, but he’s a solid option in the Big Ten and knows his role coming into the season. I do expect Woodson to coach him up and turn him into a more reliable offensive option and passer. I’ll save the statistic predictions for CBB Rank, but if Woodson turned around Raymond Felton in New York, Rob Phinisee might be in for a big year. It also seems as if Woodson has already boosted Phinisee’s confidence.

Phinisee on last season: “I feel like a lot of people counted me out and forgot about how good I was.” Says he feels he fits well into Mike Woodson’s system. #iubb

With all due respect to incoming 5-star Tamar Bates, Xavier Johnson is the starter on day one.

Mike Woodson called out Johnson, which can be seen in the Tweet below.

Woodson on transfer Xavier Johnson (this is a quote): “I’ve probably been on his ass more than anybody on the team.” #iubb

That sounds more like a coach trying to get more out of a player more than anything, but it’s at least something to remember down the line. Either way, Johnson is way too good of a player to not earn a starting not.

Also of note, I’m really leaning toward the fact that Indiana basketball might actually run two point guards. Phinisee has been a PG for his entire college basketball career and Johnson has too. Johnson’s arguably more skilled, but Phinisee has been Indiana’s point for three years, so that’s why I put Xavier at the two spot.

Johnson also brings a lot more scoring as a guard, averaging 13.7 points per game for his career. He can still serve as a facilitator but in a smaller capacity. Just the thought of having Johnson, who excels at scoring and passes, at the shooting guard position is a good thought.

Race Thompson is the player Indiana basketball should be most excited about. He’s tripled his scoring averages each year as a Hoosier, so having coach Woodson ought to help toward another burst forward.

Playing Thompson at small forward instead of power forward also allows Indiana to put forward a very strong and athletic team upfront. Phinisee and Johnson are two very poised guards, so Thompson could bring his strength at the three spot and help outrebound and outphysical opposing teams.

I’m also a believer that Thompson finds a nice scoring groove this season. The fact that he averaged nine points per game on just over six shot attempts makes me think Thompson could take an insane jump forward with the right confidence boost.

At the very least though, he’s a returning starter that gets it done defensively and will also give you ten points a night. The definition of solid.

The star of Indiana basketball is back and as Mike Woodson said, is “the only lock to be a starter right now.”

Woodson says Trayce Jackson-Davis is the only lock to be a starter right now. #iubb

That shouldn’t come as a surprise, as Jackson-Davis has been the heart and soul of IU hoops for two years, going on three.

Imagine if he improves on averages of 19.1 points and 9.0 rebounds last season. Jackson-Davis could throw himself in player of the year contention, as something in the realm of 22 and 10 isn’t out of the question.

There’s not much else to say about why Jackson-Davis should start at the four, because Woodson practically already said it.

Any time a head coach praises an incoming player for making the current star better, they deserve the nod. Jackson-Davis should also thrive under his more natural position at power forward, and the Jackson-Davis and Durr frontcourt would be daunting to square off against.

Durr played his first three seasons at South Florida. Last season was his best statistical campaign with 8.8 points and 7.9 rebounds.

I see Durr as another player who can thrive under Woodson. He already has the perfect size for a Big Ten center, so if Woodson can really grind out what Durr is capable of, he should not only hold his own, but be one of the top bigs in the conference. With Kofi Cockburn back for Illinois, he’ll need to.