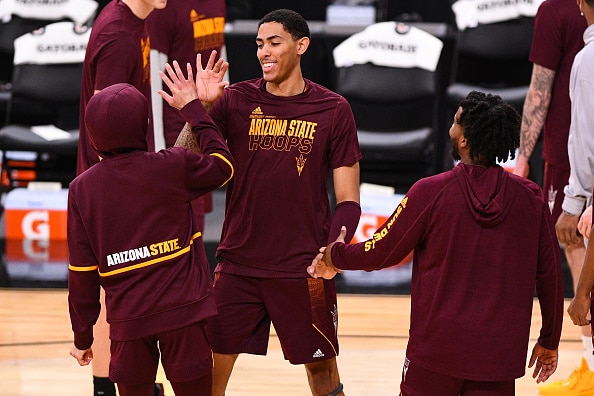 After a surprisingly bad year, Arizona State basketball looks to turn it around led by Coach Bobby Hurley.

Arizona State basketball was a team many predicted would win the Pac 12 last year, and maybe even make an NCAA Tournament run. Instead, they finished with a sub.500 record and missed everything. Now, the team will look a lot different with their top 3 scorers from last season transferring or going to the draft and only 3 (!) players from last year’s team returning. The good news is they returned Marcus Bagley and brought in three talented transfers as they look to get back to the promised land.

When Bagley announced he was returning for his sophomore season, the whole of Tempe could be heard celebrating. Bagley had a solid freshman year as the fourth option, and now with his role increased the sky’s the limit. He has great size at 6’8 and can spread the floor relatively well.

Bagley did miss a lot of time due to injury, so that’s especially a concern considering how his brother has fared in the NBA. If he can stay healthy, Bagley should be a terrific player for this Arizona State basketball team.

Forks Up🔱! Time to tap into a whole other level.. #OwnZone pic.twitter.com/T2XhZ6dWAW

The MAC conference player of the year joins the Sun Devils after back-to-back 18+ PPG seasons. He was incredible for Toledo and carried them to wins repeatedly. Obviously, the Pac 12 is a much more competitive conference, so the question is whether his scoring and overall ability can translate to a Power 5 conference. He doesn’t have to score 18 points per game, but if he can be in double digits and have a few 25+ point games that are more than enough and his play can lead them to wins during the conference schedule.

The leader off the bench is Horne, who averaged 15 points per game last season at Eastern Illinois. He is a great option off the bench and could be a spark when the shots aren’t falling. Following him is a near five star in Enoch Boakye. Boakye is a great rebounder and could be a great shot blocker; don’t be surprised if he sneaks in a few starts this season. The rest of the bench is decent, with two big question marks in Muhammad and Gaffney. They can develop into nice players, but injuries and other issues make it very questionable for that to happen.

According to KenPom, Arizona State had the 21st fastest tempo in all of college basketball. However, they were only 96th in scoring. This means that they were playing fast, but not converting. With their top 3 scoring options gone, there is concern that while the tempo may remain the same, the scoring will drop even further. Coach Hurley will certainly look at both of these statistics and make sure that their transition offense is at an elite level.

It’s pretty hard to analyze how good this team will be since there are so many new players on the team. Chemistry will obviously be an issue in the beginning, but Coach Hurley will do a good job in making sure this isn’t an issue.

What it really comes down to is whether the transfers can perform at the same level they did at their former schools like Arizona State. Heath, Horne, and Jackson all averaged between 14-18 points per game at their former schools, and while they’re not expected to put up the same numbers as before, if even one of them can’t find their shot Arizona State basketball can be in trouble.

Something to watch for is the development of Enoch Boakye. Despite his ranking, he is certainly a multi-year player, so the question is how much of an impact can he make this season. He came to ASU because he wanted an immediate role, which he couldn’t get at the school he committed to before, Michigan State.

Overall, the Pac 12 is pretty open after UCLA. Oregon, USC, and even Arizona should all be tough competition for the Sun Devils, but if the pieces click then Arizona State basketball is in for a nice season.

Projected Finish: 8th in the Pac 12