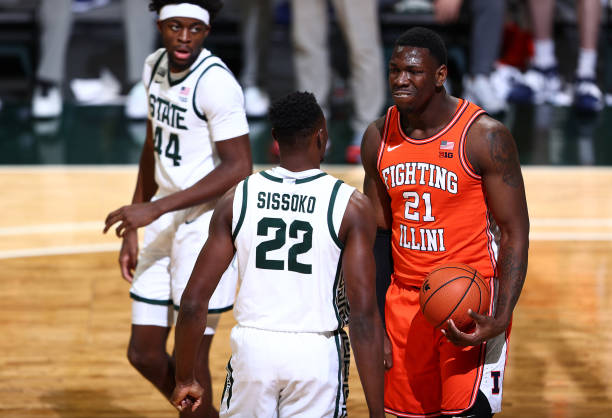 Drew Timme and Kofi Cockburn head up an impressive list of returning big men in college basketball that will aim to prove their position is not dead.

College basketball is in full pre-season form – predictions, rankings, bracketologies and everything of the sort are being flooded to YOU the reader. It’s time to get hyped for the next edition of college hoops and why stop short? In fact, let’s go big or go home and look at the top centers and power forwards returning to their teams.

It was really hard singling out just ten guys because there were at least five or six others that had the merit to make the top ten. However, I chose Muszynski, given his star status from a complete mid-major conference.

Last season Muszynski actually disappointed me a bit. His numbers fell off in scoring, rebounding and shooting percentage. I’m betting on that not to happen for a second straight year and for Muszynski to put up something around 17.5/6.4/64.5%. That’s not a ridiculous ask, given it’s his senior year and a lot of eyes will be on Belmont’s team as a whole.

Wahab transferred from one DMV University to another, taking his talents from Georgetown to Maryland. Wahab had a breakout season last year and was a key factor in Georgetown’s Big East Tournament run, averaging 14.3 points and 8.3 rebounds in those four games.

Wahab will still only be in his third year of college ball, so he likely hasn’t reached his potential yet. Mark Turgeon’s also had notable success with big men in the past, with Bruno Fernando and Jalen Smith both making huge impacts in the Big Ten.

Another player that decided to transfer, Tre Mitchell comes all the way from UMass to Texas. He might not be Marcus Camby good, but Mitchell is now set to be the next great Longhorn big man.

At UMass, he dominated, averaging 18.8 points, 7.2 rebounds, 2.2 assists and 1.5 blocks as a sophomore. Those numbers will likely dip down in the Big 12, but like Wahab, Mitchell has still just played two full seasons in college basketball. He’s also a beefy center at 6-foot-9 and 240 pounds, so the adjustment to a power conference shouldn’t be too difficult.

Xavier was one of our latest teams in the CBB Rank countdown and perhaps the most convincing reason why the Musketeers will be a team to watch is the return of Freemantle.

Freemantle is a lengthy big man who can run the floor, knock down shots and post up inside. He fits the mold of what successful big men are in modern-day college basketball. He’ll also get to play with a 7-footer this year in Jack Nunge who transferred from Iowa. That will allow Freemantle more freedom as a potential stretch-four. However, the minute you give him room in the paint, he’s going to make you pay.

Osunniyi is maybe my favorite big man on this list because of how sneakily good he is. He plays with a lot of passion and brings disruption on the defensive low block.

Osunniyi continues to improve on offense, especially as a passer, doubling his assists per game from 1.2 as a sophomore to 2.4 as a junior last season. I’m looking for more production from the senior as a scorer this year but it goes without saying that as a rim protector, rebounder and passer, he’s a level above most centers.

The minute you look at Trevion Williams you understand he’s going to be a bruiser inside. Trying to move a 6-foot-10, 265 pound monster of a man off the block is no easy task and Williams is a nifty passer which makes him more of an all-around threat.

He’s a menace for a Purdue Boilermakers team that features him around multiple talented guards. Williams might not be the flashiest or smoothest player but when he has the ball under the rim, defenders better hold on for dear life.

The Big Ten has the best centers in college basketball and it isn’t particularly close. Dickinson came onto the scene strong as a freshman, averaging 14.1 points, 7.4 rebounds and 1.4 blocks as a freshman. Those numbers should absolutely climb as he’ll transition from the inside option to the first option on offense.

Dickinson’s got the perfect size for a 7-footer, with enough muscle to bang down low with the Trevion Williams’ of the world, yet the quickness to be able to make decisive moves. Dickinson also has the most upside of anyone on this list, because he was just a freshman last season. At the end of the year, he might be in the top two depending on how much he improves.

Jackson-Davis also shined as a freshman and did make another huge leap as a sophomore, improving his averages in the major categories of points, rebounds and assists.

The next step for Jackson-Davis will be applying himself even more on defense. First-year head coach Mike Woodson could turn Jackson-Davis into a ferocious man-to-man defender. If that happens, he might be the most complete inside player the Hoosiers have had since Cody Zeller.

A lot of college basketball analysts have Timme as the national preseason player of the year, so you may ask why I have it at number two on the list of best centers. I’ll answer the obvious question and say ‘no’ it isn’t because of his poor performance in the 2021 National Championship Game.

Timme is about as solid as they get. He has limited range, unmatchable efficiency inside and court vision to tie it all together. Timme’s basketball IQ is probably the best of any center or player in college basketball. However, he will share the floor with Chet Holmgren, another extremely talented power forward. You might see a little less of Timme because of how great Holmgren already is just as a freshman. That shouldn’t take anything away from Timme’s game, but you’ll see why I chose who I did for the top spot.

Ayo Dosunmu and Adam Miller are gone and Cockburn decided to run it back with the Illinois bunch. Last year, even having to share the ball with Dosunmu, Cockburn put up averages of 17.7 points, 9.5 rebounds and 1.3 blocks.

This season, we could see unreal numbers from Cockburn’s end. I’m talking about something in the range of 21/11/2.  The 7-foot, 285 beast didn’t return to the Fighting Illini for no reason. He’s going to put it all out on the floor and there’s a reason Illinois is still a contender after losing a player like Dosunmu.