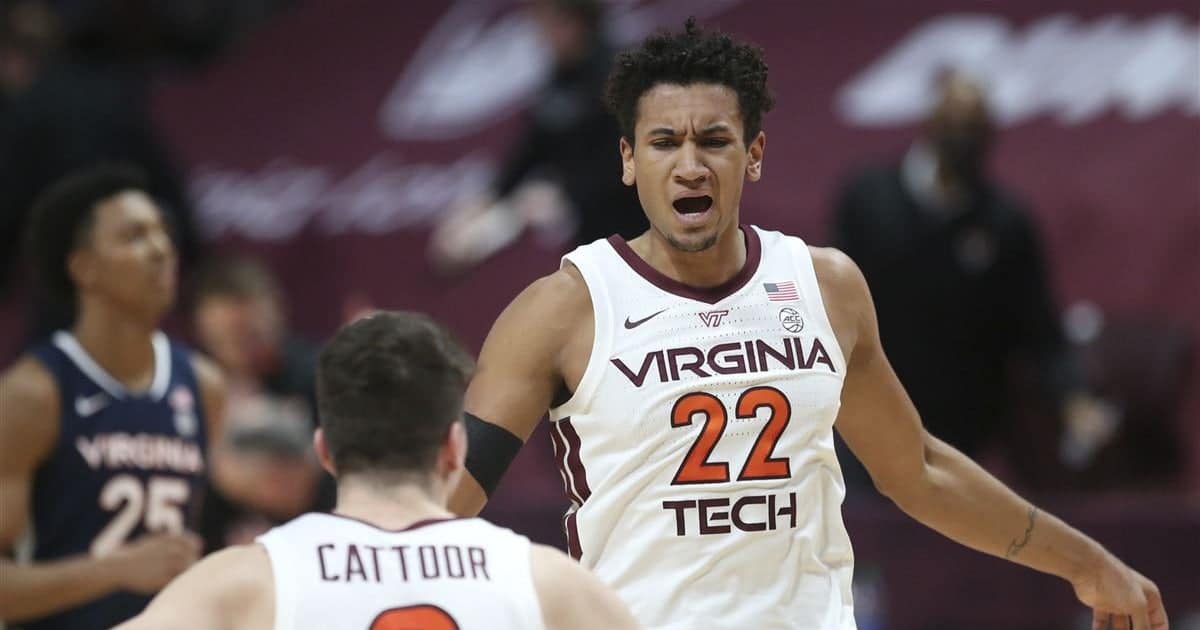 Virginia Tech basketball reloads after the loss of graduates and transfers.

Virginia Tech basketball battled Covid-19 and the ACC to make it into the NCAA tournament losing in the first round to the Florida Gators. The Hokies lost Wabiss Bede, Cartier Diarra, and Cordell Pemsl as all chose to move on from the school and seek professional careers.

The star guard for Virginia Tech basketball, Tyrece Radford transferred to Texas A&M. The team also lost Jalen Cone to Northern Arizona and Josepha Bamisilie to George Washington as they chose to transfer for the potential of more exposure and minutes.

The good news for Virginia Tech basketball is that head coach Mike Young was able to bring in an experienced guard out of Wofford in Storm Murphy. The Hokies were also able to land Lynn Kidd from Clemson, who could end up being a vital piece of this offense as a big man. The team also grabbed a couple of freshmen guards and forwards to help boost the team.

Thanks for doubting us.

Keve Aluma put on a show against no. 8 Virginia ♨️pic.twitter.com/HdPBl5Vm6R

Aluma helps Virginia Tech basketball in more technical aspects as he helps in defensive win shares, box plus minute, rebound percentage, and block percentage. The area that he helps the most is his ability to produce points outside of himself. If Aluma continues to expand his game, he can be a massive asset for the Hokies and an issue for the ACC opponents.

Virginia Tech Basketball brought in Storm Murphy as a leader and a combo guard that naturally plays as a point. He can do it all, and it will cause a lot of problems for offenses. Murphy will have some growing pains going into a more significant, better conference.

He will need to step up and make the big plays necessary for the Hokies. Murphy could struggle a little bit as a smaller guard, but he puts in the work early. I hope that Coach Young forces him to play against the bigger players to prepare him for potential offensive and defensive matchups.

Murphy is hoping that he can have mutually beneficial growth with Virginia Tech basketball. He is hoping that his stats from the Southern Conference to the ACC. Murphy was a tremendous asset to Wofford, and if he plays like he did a Wofford, he will be on an NBA team next year.

Murphy showed out in the Southern Conference, and it shows in his technical stats. He had two categories in the SoCon where he led all other players: offensive win share (3.1) and offensive box plus/minus (4.9). Murphy hopes to come storming into the ACC and show out for Virginia Tech basketball.

Virginia Tech filled up the team with seven guards, four forwards, and two centers. The issue is that there isn’t a lot of experience coming off the bench. The experienced players are starting in Murphy, Aluma, and Mutts as a guard and two forwards. There are three junior players in Alleyne, Ojiako, and Cattoor: two guards and a center. Three players are sophomores in N’Guessan, Maddox, and Kidd, balanced in a guard, forward, and center. All of the freshmen players include three guards and a forward.

The bench players are hoping that more experience allows for more opportunities. Last year, the players on the bench had minimal production. Virginia Tech basketball is hurting when it comes to depth and production. The players from last year have a few returners, but the walk-ons from the previous year have seemingly departed, and the bench players that stayed averaged less than three points per game.

Virginia Tech was a top 50 team in terms of three-point percentage and that will only grow with the addition of a knock-down shooter in Storm Murphy. However, teams can’t plan on just stopping Murphy from behind the mark.

Alleyne, Cattoor and Murphy all have at least one season in the books of a three-point shooting percentage over 40%. They have a chance to be one of the deadliest trios in college basketball and will completely open up the inside for a power duo down low in Mutts and Aluma. The offensive capabilities are endless.

Virginia Tech basketball eases into its non-conference schedule with Maine, Navy, Radford, San Francis, and Merrimack. Before the intensity and resume building teams make it difficult for the Hokies. This team will face Memphis in NIT Season Tip-off. They will then play either Xavier or Iowa State in that tournament.

After that, the Hokies have tests against Maryland, Wake Forest, Cornell, Dayton and wraps up its non-conference schedule with St. Bonaventure. This team will then head into conference play and hopes to return to the NCAA tournament. With the difficulty of the ACC, the Hokies will likely find their way to postseason play.