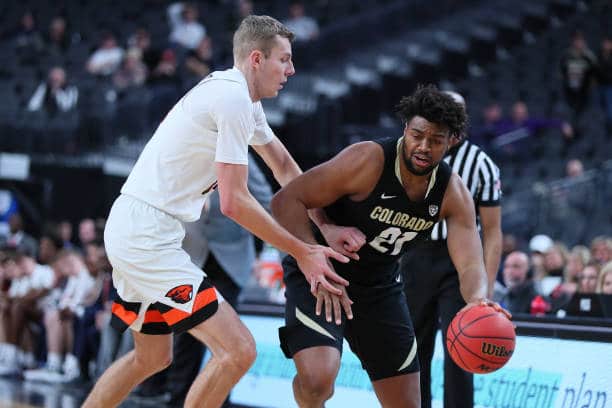 Colorado basketball will need its talented group of freshmen to step up if the Buffaloes are to live up to the hype to start the season.

It’s going to have to be time for Evan Battey to take control of Colorado basketball. The big man has lived in the shadows of McKinley Wright IV for the past two seasons. Now, it’s time for the fifth-year senior to lead by example on the court.

Battey certainly has the body type to be able to be a bruiser in the Pac-12. That will have to show up on the glass, where Battey will be sharing the frontcourt with a freshman.

In the scoring department, Battey will most likely have a lot of expectations of becoming a 15-16 points per game scorer. That’s realistic, but it doesn’t need to be forced. As long as Battey plays within himself – meaning physical and efficient buckets inside – then he will excel for the Buffaloes. But the minute he tries to be something he isn’t it could spell trouble for the Buffaloes.

It wasn’t just Wright who left the program due to graduation. Jeriah Horne transferred back to Tulsa, D’Shawn Schwartz is headed to George Mason, and a few other role players are no longer with Colorado basketball.

This means that someone like Jabari Walker, who held a small role last season, will have to immediately become a heavily relied upon starter. Walker played just around 14 minutes per game last season but had a few flashes of the potential to be a star in the future.

Walker scored his season-high 24 points in the NCAA Tournament round of 64 against Georgetown. His 9-of-10 shooting from the field was exceptional, including a perfect 5-of-5 from downtown and 2 blocks on the defensive end. However, he was held to zero points in the following game. Consistency will be key for Walker this season.

If Walker takes a big step forward, watch out. He has the skills to be an NBA player, given his unique length and three-point effectiveness. Some of his teammates will also have chances to have a big role, but Walker’s production seems imminent.

It’s impossible to tell how freshman will play – Walker was only a 3-star last season. However, a bench that includes two freshman and two sophomores – with zero career starts between the four – is about as young as it gets. Like with the starting lineup, someone, or even better two of them, must mature quickly and adjust to an advanced role.

Da Silva played in 24 games for the Buffaloes last season, so his track record is the most promising. However, Clifford is a former 4-star recruit, so his initial potential was to be a starter by his sophomore or junior season. He just didn’t get a lot of opportunities last season.

Both sophomores will be called upon to play somewhere between 15 and 20 minutes per game, so no matter what, they’ll be thrown into the fire. Quincy Allen and KJ Simpson are top-100 recruits eager to win some time as well, so the healthy competition for bench minutes could be a good thing. But on paper right now, how young Colorado basketball is shining through.

That’s a pretty exclusive club, and while the departure of so many players is sure to drop Colorado in those rankings a bit, they still should fare pretty well in the defensive category. Over the past three seasons, the Buffaloes have finished no worse than 39th in AdjD.

Having a physical specimen in Battey paired with an incoming 7-footer in Lawson Lovering is sure to keep those numbers pretty darn good. Walker’s length disrupts passing lanes and the backcourt is good enough to force steals and keep up the defensive intensity.

Mass turnarounds go one of two ways. They either end in a one-year disaster, or they work out and Tad Boyle will go down in history for getting seven underclassmen to play so well together. I’d look for somewhere in the middle, but having the 13th best recruiting class isn’t something to shrug off.

These young guns will be tested on numerous occasions. Colorado basketball is scheduled to play a slew of teams in non-conference play:

That type of scheduling forces young players to mature whether they like it or not. It also boosts a tournament resume, which will be needed, in the Pac 12.

Colorado basketball probably has one of the highest upsides and lowest pitfalls of any team in the country. They lost an NBA talent in McKinley Wright IV and will have one of the youngest teams of anyone in college basketball this season. There will be struggles, but there is exceptional talent in Boulder, so fasten your saddles because it’s going to be a wild rodeo with the Buffs.