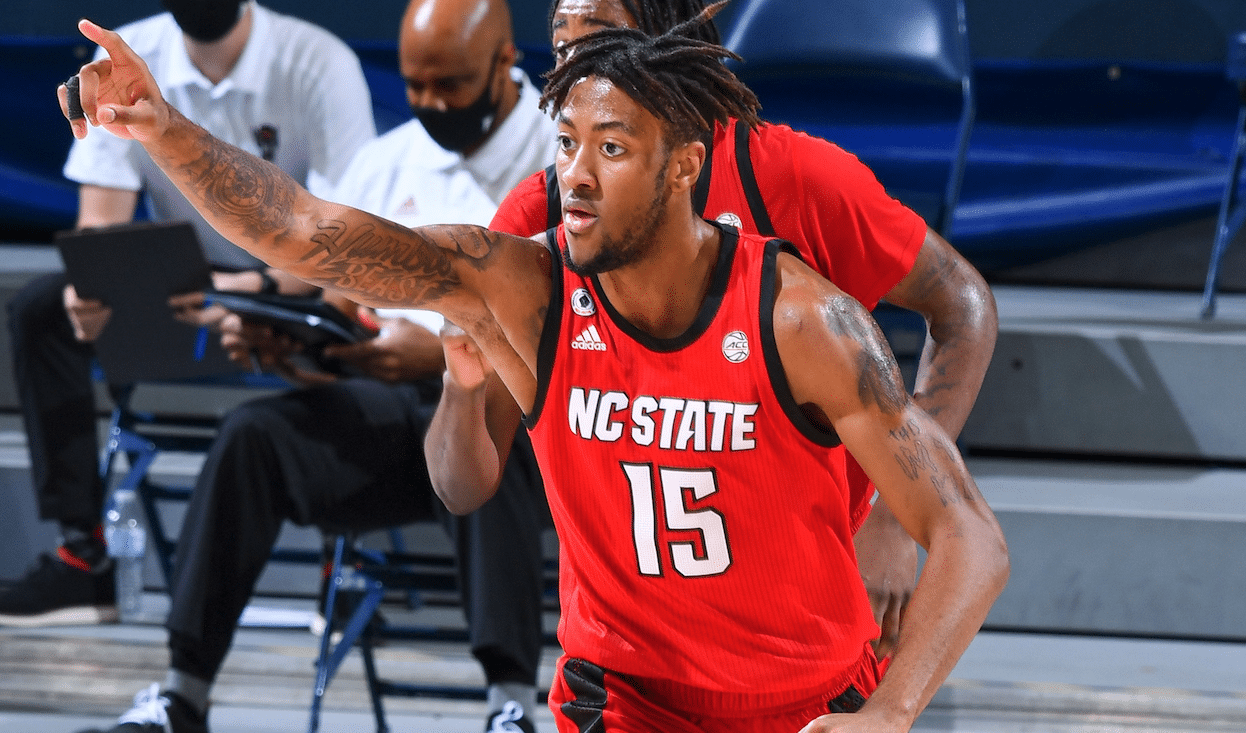 NC State basketball adds to transfers to a youthful and defensive-oriented team.

NC State basketball boasts a youthful team with some experience returning to the starting five. Three freshmen ill get a chance at minutes off the bench, but two big-name transfers will be able to keep the Wolfpack in games with a very strong seven-man rotation.

Last season, the big shot-blocking forward made a jump from a promising freshman to one of the better low-post players in the ACC.

For the second consecutive year, Bates created nightmares at the rim, blocking 2.7 shots per game. He grabbed nearly two more rebounds per game and showed signs of offensive improvement. Bates topped 15 points twice in 2020-21 after never scoring more than 13 points the year prior.

Next season, expect an even bigger offensive jump. DJ Funderburk is gone, which will open up even more space and time for Bates to be in the game and dominating. Jericole Hellems could even take a backseat role, as Bates will be one of the biggest mismatches in the ACC.

By season’s end, expect Bates to be a candidate for All-ACC First Team. He’ll provide NC State basketball with a lot of wins due to his size and defensive prowess. No one wants to drive on Manny Bates and if they do, their shot will be altered.

Seabron came to the NC State basketball program as a lengthy defender with the raw potential to develop into an offensive asset. Listed as a 6-foot-7 guard, he gives the Wolfpack a third ball handler on offense and a ‘tweener’ who can guard opposing guards and forwards.

Last season Seabron pilfered 0.7 steals per game while playing only 17 minutes on average. That is sure to go up with more playing time.

In a game against Wake Forest, Seabron showed the type of NBA-2k stats he’s capable of putting up. In 33 minutes, he had 14 points, 9 rebounds, 4 steals, 3 assists, and 1 block. 5-of-10 from the field showed efficiency and an upside on the offensive end where he got better as the season rolled along.

The departure of Devon Daniels opens up a lot of scoring opportunities for someone like Seabron. Although Cam Hayes will likely benefit the most from that, Seabron will have more consistent chances at being a fourth or fifth option on the team. Expect some explosions along the way.

Kevin Keatts couldn’t have gotten two more mature and well-coached players than Casey Morsell and Greg Gantt. Morsell will have a chance to start over Thomas Allen, but right now I like him off the bench to keep things too out of wack since Allen started 15 games for the Wolfpack last season. Either way, the defensive coaching Morsell got at Virginia will easily translate to Kevin Keatts’ philosophy at North Carolina State.

Gantt comes from another fiery and passionate coach in Providence’s Ed Cooley. Gantt’s three-point shot improved last season, which could be something to watch. He’ll give great minutes to backup one of the best frontcourt duos in the ACC.

Three freshmen – Terquavion Smith, Ernest Ross and Breon Pass will all have opportunities to prove themselves for minutes. Smith and Pass will compete for a fourth guard to come in and give quality time in the first half and in the case of foul trouble to either of the starters. Ross adds to the frontcourt depth, among a few other Wolfpack players who sparingly received minutes last season.

All three freshmen were sought-after recruits, as NC State basketball had the fifth-best recruiting class in 2021 according to 247Sports.

Analytic to Know: Steals Per Game

Keeping it light with this one, NC State basketball uses defense to create offense. In 2020, the Wolfpack were T-27th in steals per game (8.0). Only Georgia Tech, Duke and Syracuse had more takeaways per game in the ACC last year.

For fans of advanced analytics, the Wolfpack were even better at turning those steals into points. NC State was 9th in an analytic called PPSt, which calculates the potential quick points off breakaway steals per 100 trips upcourt vs. the average opponent.

In other words, once NC State turns you over – which they do at a high rate – the Wolfpack players make a bee-line to the basket. Efficient basketball at its finest.

If the ACC gets 10 teams into the NCAA Tournament, I’d have to think the Wolfpack will be one of them. My latest Matty Brackets projection had nine ACC teams in the field, so they’d be borderline at best.

With that being said, preseason rankings and projections are as good as spoiled milk. They’re rarely an indication of anything and if I really wanted to include all of the teams with decent NCAA Tournament implications, the bracket would need to be expanded to 96 teams.

If the Wolfpack do want to get there in March, they’ll have to improve on last year’s lack of wins. NC State’s best win was Virginia, but that was quite literally their only impressive one.

This season, they scheduled tough. Oklahoma State, Nebraska and Purdue highlight the non-conference slate which could go a long way in showing if NC State basketball is worthy of a tournament appearance. I have them on the outside as of now, but with Manny Bates dominating down low, they could wind up being an 8-seed in the same breath.