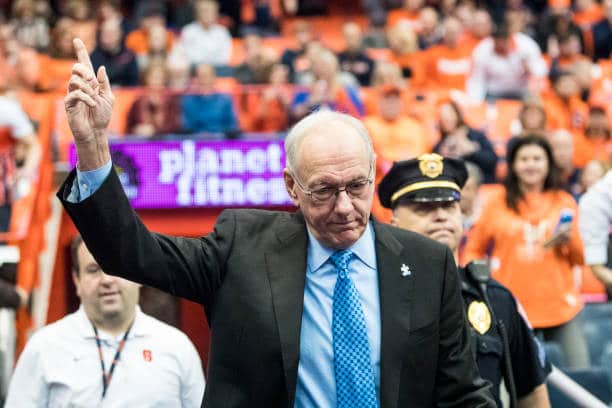 These college basketball coaches have good odds to climb up career leaderboards this season.

Matt Painter will enter the season just 20 wins away from career win number 400. He’ll have the help of a potential Final Four team in the Purdue Boilermakers.

The 51-year-old Painter is hitting the point in his career when you really start to look at how far he might climb up the college basketball head coaches career wins list. Painter began coaching in 2003 at Southern Illinois and a 25-5 record helped earn him the job at his alma mater Purdue the following year.

Since the Boilermakers tabbed Painter in ’04, he’s been nothing short of elite. He’s on the verge of guiding them to an eighth straight winning season and 13th NCAA Tournament appearance in the past 16 seasons.

Painter easily has another 15 years of coaching left in his pocket. 400 is beyond attainable this season and at his current rate of about 22 wins per season, Painter could join the 700 wins club by the time he retires.

Sampson has been in the head coaching game since 1987 and finally made his second career Final Four in 2021. Sometime in December this year, Sampson will win the 600th game of his career, becoming just the 42nd coach to do so in the history of college basketball.

He’s been better with age, winning 23 games or more over the past four seasons. He did that one other time at Oklahoma, and it doesn’t look like his Houston Cougars are anywhere close to slowing down.

The 75-year-old Sampson probably doesn’t have too many seasons left in the bag, so 600 would be a nice treat before he calls it quits. He has yet to announce any indications to resign, but something tells me it would be sooner rather than later.

The Davidson head coach is exactly 20 games away from reaching 1,000 career games coached, which unlike wins, is something you can practically guarantee. You’ll see in a moment why we have Tubby Smith ranked ahead of McKillop, but for now, let’s appreciate his greatness.

Games coached in college basketball is a funny stat because while it could mean your record isn’t great, that’s not entirely true. No coach is ever going to reach 1,000 career games without having some sort of sustained success over a decently long period, because wins equal trust and trust equals contract extensions.

McKillop has done it all at one school and that’s impressive in its own right. Along the way he’s guided the Wildcats to nine NCAA Tournaments, dominating the Southern Conference for a majority of those automatic bids.

This year, it’ll be time to celebrate all he’s achieved. Once Davidson basketball releases its full 2021-22 schedule, that will be a date to circle.

Smith became a head coach two years after McKillop, so his path to 1,000 has been shorter, and also more impressive. That’s not to discount McKillop’s coaching career – he hit 600 wins just last season. However, Smith is getting to 1,000 two years quicker. If you do the math, that means a few more wins in the postseason have extended his overall seasons.

Smith’s teams made the NCAA Tournament every year from 1994 to 2007, accomplishing that feat with Tulsa, Georgia and Kentucky. He led the Wildcats to a National Championship and advanced to the Sweet Sixteen or further five other years.

Smith has had fewer winning seasons since he resigned from UK in 2007, taking a job at Minnesota. The Gophers made three NCAA Tournaments during his six-year tenure. Since then, he’s hopped around at Texas Tech, Memphis and now High Point, his Alma Mater. Being able to coach his 1,000th game at – you guessed it – Kentucky on December 31, will be extra sweet.

I usually say that for a college basketball coach, the biggest milestones are 500 wins, 700 wins, and 1,000 wins. Don’t ask me why, but there’s something about hitting 700 that just – hits different.

It might be the exclusivity of reaching the 700-win plateau. Only 23 coaches have done it so far, compared to the 41 who’ve compiled 600 total wins. To me, 700 almost guarantees a vote into the Naismith Basketball Hall of Fame. It’s that tough to do at the Division I level.

Altman turned 63 this summer, so he’s still relatively young in terms of coaching goes. I can see him coaching somewhere around 10 more seasons, which by the time he retires, would put him easily inside the top ten in coaching victories all-time and borderline top five. Before we get ahead of ourselves, let’s appreciate Altman’s path to 700, which he should find by late December.

While not an actual number to hit, Rick Barnes needs to coach 22 games this season in order to pass Eddie Sutton for the 10th most games coached in college basketball history.

Barnes is well over 1,000 (1,114 if you’re keeping track) and will add to that with Tennessee this season and possibly quite a few to come. He’s still just 67 years old, so if you’re looking for some more milestones for Barnes to hit, why don’t we say 1,250 games coached and 800 career wins. Both should be relatively easy if Barnes were to coach another four or five seasons.

Barnes is most well-known for his time at Texas, where he coached 582 games and won over 400 of them. However, he’s entering his seventh season at Tennessee, making good for 7th on the Vols all-time list in wins. It’s been quite a career for Rick Barnes.

Now we’re getting into the big-time accolades as John Calipari is just 16 wins away from 800 in his career. That would tie him at tenth with Cliff Ellis, but both Calipari and Ellis should pass Eddie Sutton’s 806.

It’s hard to believe Coach Cal will only turn 63 this season, but it’s true. Unless he hangs his jacket up early, Calipari has an easy path to hit 1,000 wins and potentially even challenge Coach K at the top of the biggest list for a college basketball coach.

This season though, it’ll be nice for Calipari to cherish 800 W’s. The bigger the milestone gets, the fewer more there will be to hit, and 800 is certainly up there.

This might not make as much sense because Pitino is: A. Older, B. Coached more games, and C. Two games behind Calipari right now.

But I checked off: D. The story behind it.

I’m not here to argue for or against what Pitino did at Louisville and why he was out of college basketball for three years. I am here to say that the fact he came back and has a good chance to reach another milestone, which might be his last total wins milestone, is a very big story.

Now we’ll get deeper into this in a little bit, but I’m counting all of Pitino’s wins, not just what the NCAA says. If we’re going by NCAA standards, Pitino would still have just 659 career wins. That’s just ridiculous to take seriously, given how much Pitino has done for the game and accomplished at Kentucky and Louisville.

Iona will need 18 wins for Pitino to reach 800. They’re one of the favorites to win the MAAC, but this is quite possibly the most challenging milestone of anyone one here to hit this season. I guess that’s another reason to rank it third.

This college basketball milestone doesn’t always get tracked, but it would be super impressive for Self because it would also place him ahead of Jim Calhoun in the process. Self is currently at 49 career tournament wins and the Jayhawks could be ranked first to begin the season.

Kansas doesn’t often live down to expectations, so a first-round tournament win seems like a pretty good bet. The Jayhawks haven’t been eliminated in the round of 64 since 2006, so Self should be pretty confident about getting at least one win.

Tom Izzo would be next up to pass at 52 career tourney dubs, but given he’s also active, Self would have to have a Final Four run and Michigan State would have to get beat pretty early. Either way, Bill Self is about to join an even more exclusive club.

With 982 career wins in the NCAA official record book, Syracuse hoops coach Jim Boeheim is right in striking distance of joining Mike Krzyzewski at 1,000 career wins. The only problem? He already did it a few years back.

Boeheim hit the unofficial 1,000 wins mark back in 2017 after an upset over No. 9 Virginia. However, the NCAA had previously taken away 101 of his wins in its official record book, meaning it was technically just his 999th victory. Now he’s around the corner from winning 1,000 games in the NCAA’s eyes, although it’d really be 1,101 by Syracuse standards. Confused yet?

Congrats to Jim Boeheim. He doesn’t have 1000 wins but his opponents have 1000 losses. Don’t ask me explain that one.

Either way you look at it, Jim Boeheim will retire with at least 1,000 wins, and the NCAA will have to accept it this year. The Orange should be a top-half ACC team, so as long as they live up to those standards, he’ll reach 1,000 sometime in February or March.