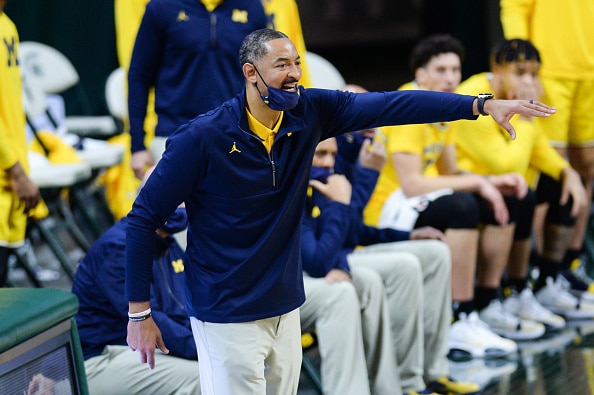 Michigan basketball exploded late in the second half to avoid an upset against LSU.

Falling behind by five in the Round of 32, Michigan basketball went on a 14-1 run to take control of the game with just under six minutes to play. LSU would not cut the lead to less than six, and Michigan closed out the game with an 86-78 victory.

The Wolverines shot over 50% from the field, and made one more field goal than LSU despite having 17 less attempts. The game was called closely, and Michigan took full advantage, knocking down 20 of its 25 attempts from the charity stripe.

The Wolverines assisted on 22 of its 28 baskets, while LSU assisted on only seven of its 27 field goals. Michigan assisted more than its season average, and LSU assisted well below what it usually does.

The bottom line is Michigan was sharing the wealth offensively. The Wolverines played unselfishly, passing to the open guy for the best possible shot, part of the reason they scored on more than 50% of their shots.

LSU played mainly iso ball, clearly out and forcing a bad shot, usually a double-covered layup. Especially when Michigan slowed down the pace, LSU continued to rely on one player to create on offense rather than passing to create.

Michigan had 26 points from off the bench, including 21 from senior guard Chaundee Brown, tying the team high with Eli Brooks. LSU had just two bench points, coming at the end of regulation on free-throws.

LSU needed its bench to produce in order to stay in the game, as Trendon Watford and Darius Days were both in foul trouble. However, just three shot attempts off the pine put them at a real disadvantage, even with Javonte Smart and Cam Thomas combining for 59 points.

Michigan was able to rely on five scorers, including Brown off the bench, to score at any point. This allowed them to pass well and find the open shot, eventually taking over in the second half to win.

3) The Outside shot: Also key in March Madness

All champions play good defense and hit shots from outside. Michigan did both tonight, especially shooting the three ball. It mad 10 threes in the contest on 25 shots from bonus land.

Michigan shoots 38.7% from three, behind only Baylor and tied with Oral Roberts for highest percentage from three among teams still in the field. The Wolverines will make a deep run if they can maintain consistency from beyond the arc.

Michigan is now tasked with an athletic Florida State team on Sunday in the March Madness Sweet 16.