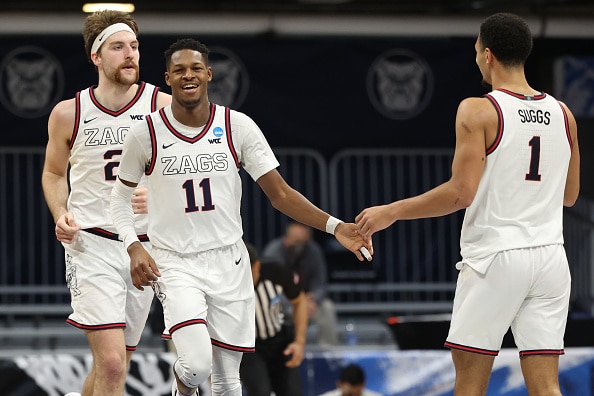 Gonzaga basketball did not trail in the matchup.USC did not get within 13 after 4:32 to go in the first half, giving the Zags an 85-66 win.

Drew Timme continued his hot play, scoring 23 on 10-19 shooting and adding five boards. Jalen Suggs was two assists away from a triple double, scoring 18 points and grabbing 10 rebounds to go along with eight assists.

For USC, the Mobley brothers combined for 36 of the Trojans’ 66 points. They only had four bench points in the game, coming from Max Agbonkpolo.

Gonzaga now advances to its second final four in the last five years, this with Mark Few’s best team ever, and

1. Gonzaga Basketball’s Defense is as Elite as its Offense

The Zags held a very good USC team to just 66 points on just 38.7% from the field and 4-15 from three. All that while out rebounding the Trojans by 12.

Gonzaga is obviously an offensive powerhouse. Timme, Corey Kispert, and Suggs are easily the best trio in the nation. With Joel Ayayi and Andrew Nembhard in the lineup, the offense is unstoppable, which is shown in the team’s perfect record.

But the defense for the Zags is underrated due to how special the offense is. The Zags hold their opponents to just 41% shooting on average, second in the nation. They also keep opponents to just 31% from beyond the arc, fourth best in the country.

2. Drew Timme is Playing His Best Basketball at the Right Time

In the four regional games for Gonzaga basketball, Timme has averaged over 21 points per game, including 30 in a win over Oklahoma. He led all scorers tonight, adding 23 in the blowout.

Timme is a matchup nightmare for opponents, as he is so creative in the post and uses his size and quickness better than anyone in college basketball. Coupled with the fact that teams are forced to guard the perimeter against shooters like Kispert, Timme is left alone for a 1 on 1 on the block, scoring over 50% of the time.

3. Gonzaga is STILL the Team to Beat

Baylor and Houston are playing great, but Gonzaga basketball is so well rounded and well coached that they seem untouchable. Saying the Zags are the favorite is like beating a dead horse, but they are that elite, and people disregard them because they play in the WCC.

Gonzaga has a 38.79 adjusted efficiency, which is the highest in the KenPom era. Saying they are the best team ever is not an outrageous statement. Anything other than a National Championship seems disappointing for the Zags.

Gonzaga Basketball will now play in the Final Four next Saturday against the winner of Michigan and UCLA.