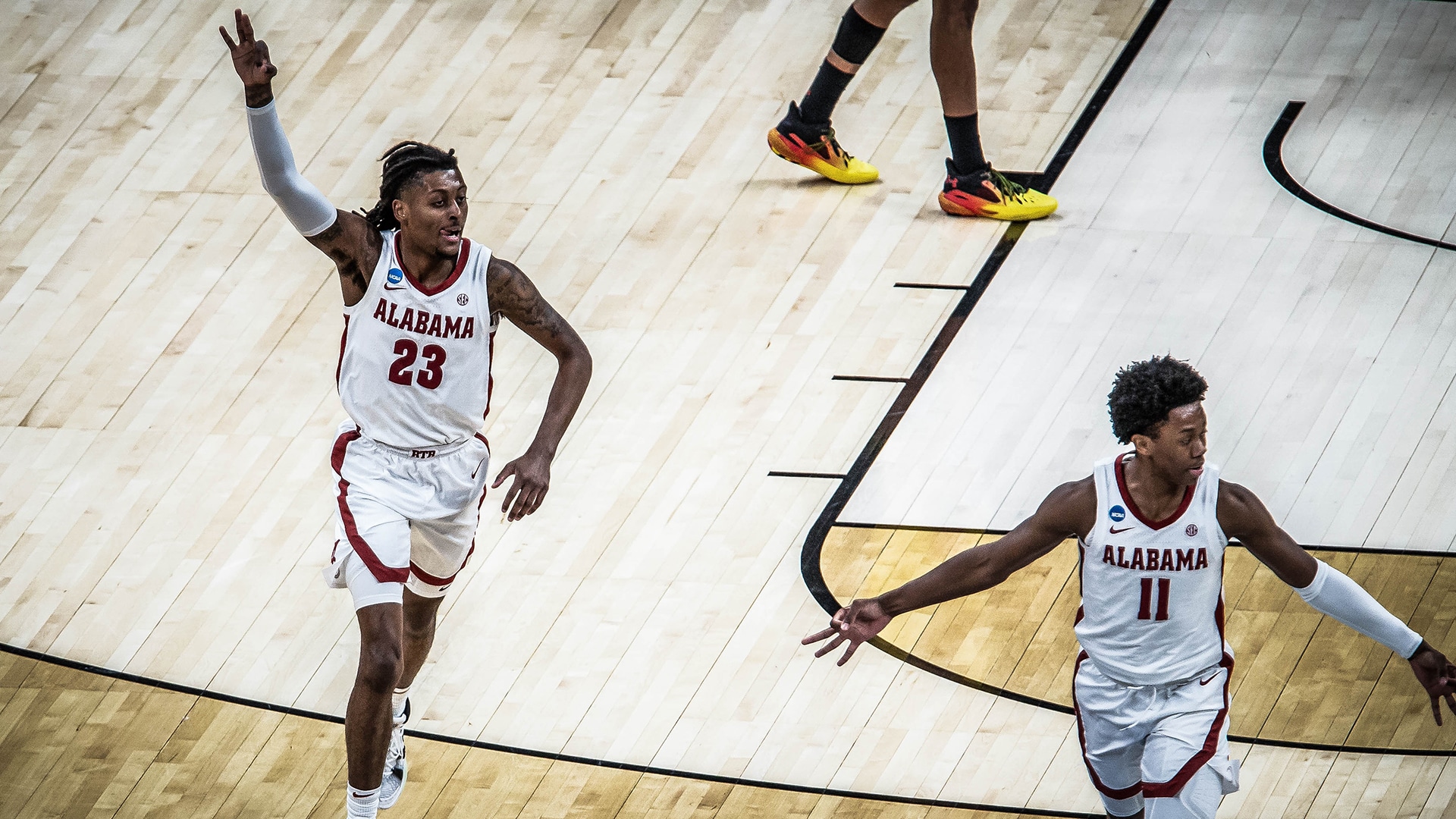 March Madness continued on with Alabama basketball dominating Maryland due to their hot three-point shooting.

March Madness has seen its fair share of upsets, but the last day of the second round has seen things go close to chalk. Gonzaga and Michigan advanced, though the Wolverines faced a tough test against LSU. The Alabama Crimson Tide were looking to join the party, taking on a pesky Maryland group. However, Alabama basketball had one of their signature hot-shooting nights from beyond the arc, boosting them to a 96-77 victory on Monday night. The result puts the Crimson Tide back into the Sweet 16 for the first time since 2004. Jaden Shackelford poured in 21 points, while teammate John Petty was right behind him with 20. Aaron Wiggins was the lone bright spot for the Terps, leading all scorers with 27 points.

It was a well-known fact coming into March Madness that Alabama would be shooting a high volume of three-point shots. Normally that can be a recipe for disaster when the shots aren’t falling. It almost was in the first round, with the Crimson Tide only draining five in a win over Iona that was closer than they would’ve liked. However, that was not the case in the Round of 32 against Maryland. Alabama hit their made threes total from their first match-up within the first ten minutes of the game and never looked back.

The Crimson Tide finished the game shooting 16-33 from beyond the arc, a shooting percentage that is just below 50 percent. Those numbers are insane in any game, much less in a March Madness affair. Alabama used the deep ball to build their advantage into halftime, and the break didn’t cool them off, as they came out and hit a few more in a row to get their lead out to 23. From there, the Tide were coasting while reminding everyone else just how dangerous they can be.

A lot things went wrong for Maryland in this game. Once Alabama basketball proved they weren’t going to miss often from deep, it broke down the defense they had come to be known for over the final month of the season. Defending the arc opened up the paint and vice versa.

If there was one bright spot to take away, it was the play of Aaron Wiggins. He almost doubled up his scoring average of 14 points per game by pouring in 27 points. Terp fans have been waiting for Wiggins to break out for three seasons now, and he finally seemed to be hitting that point in March. He stepped up big time for Maryland in their first round win over UConn as well.

All things considered, this season should be considered a success in the eyes of Maryland fans. The sting of losing in the NCAA Tournament is real, regardless of when the loss occurs. However, the Terps were left for dead heading into February and found their groove, earning a 10 seed. This group only loses two seniors, and the emergence of Wiggins and Eric Ayala as well as the continued improvement of Donta Scott provide building blocks for Mark Turgeon for next season. If this team can get a true point guard and some more size, they won’t be down for long.

This wasn’t the first time that Alabama looked like a national title contender this season. After all, they didn’t earn a two seed by mistake. However, the fact that they were able to show what they are capable of on the game’s biggest stage showed they aren’t afraid of the bright lights. Not only was this group hitting threes, but they were sharing the love and still getting their fair share of buckets at the rim. It was an all-around performance that was a thing of beauty.

The bottom line is that, if Alabama plays like they did tonight, they will be virtually unbeatable. The reliance on the three ball going down still makes them scary in the other direction, as one off-shooting night can doom anybody. However, there’s enough firepower across the board for players to pick each other up. The fact that Alabama had three double-digit scorers off the bench also speaks to their depth. It seems like it’s Final Four or bust at this point in Tuscaloosa.