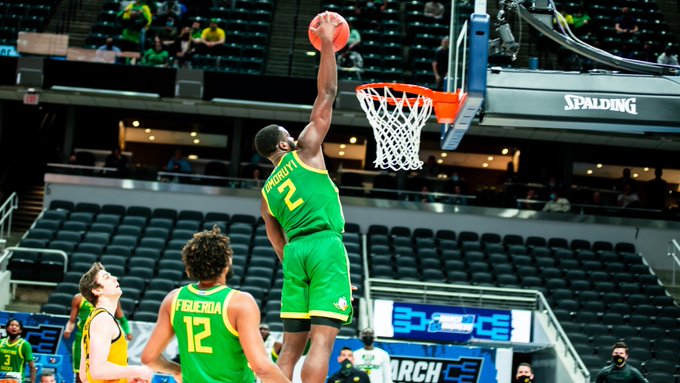 https://platform.twitter.com/widgets.js
The Pac-12 is on quite a run in this year’s NCAA Tournament. Heading into Monday’s second-round games, they have yet to lose. Ironically, Oregon had yet to get into the win column, despite advancing out of the first round. They earned the right to play Iowa when VCU was forced to withdraw from a series of positive Covid-19 test results. Oregon came out firing on all cylinders and beat second-seeded Iowa 95-80.

Coming into the first actual game of their NCAA Tournament experience, the Oregon basketball team received 84% of their scoring from their starting lineup. They did even better than that in their win over Iowa. The starting lineup of Eric Williams, Jr., Eugene Omoruyi, Chris Duarte, LJ Figueroa, and Will Richardson scored 89 of their 95 points. That is 94% of their point total. That lineup made 35 of their 60 field goal attempts, including 11 of their 24 three-point attempts. They were one more point from Williams of all five starters reaching double figures. Duarte had 23, Figueroa had 21, Richardson had 19, Omoruyi had 17 and Williams had nine.

The next level’s gonna be Sweet.@OregonMBB shuts down Iowa and advances to the Sweet 16 in #MarchMadness.#GoDucks pic.twitter.com/tHJYnYysKu

With this win, the regular-season Pac-12 champions have now won an NCAA Tournament game in seven of the last eight years, which happens to also equal the number of appearances the Ducks have made under head coach Dana Altman. This will be their fifth Sweet 16 appearance in the last nine years. They did advance to the 2017 Final Four. They could be destined to face Pac-12 rival USC, should the Trojans upend Kansas in the final game of Monday’s slate.

Oregon’s win not only spelled the end to Iowa’s season but also the career of Luka Garza. All he did in his Iowa career was graduate as the school’s all-time leading scorer with 2,306 points and 931 rebounds. He was also named the Sporting News National Player of the Year for the last two years. The last player to win this award in back-to-back years was Michael Jordan in 1983 and 1984. He was also the Big 10 Player of the Year for the last two years. He culminated his career scoring 36 points and grabbing nine rebounds before emotionally leaving the floor to a nice round of applause from the fans inside Bankers Life Fieldhouse.