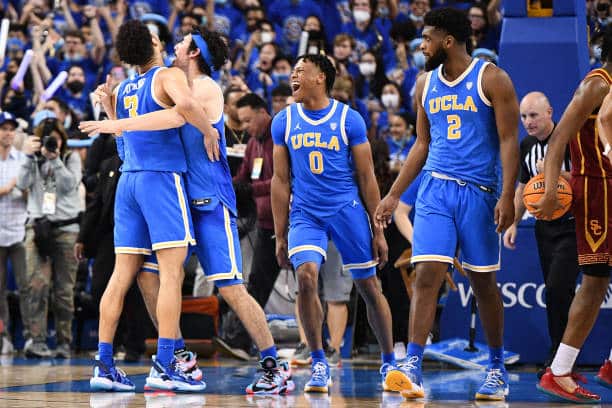 CBB Review’s Ethan Carbone goes in-depth on the top 30 college basketball recruiting classes. Next up are the UCLA Bruins who come in at 12.

UCLA freshman Amari Bailey has been selected to the watch list for the Jerry West Award, which honors the nation’s best college shooting guard.

Bailey is an athletic guard who is built like a senior and is able to drive to the basket, shoot the mid-range, and the three ball. Bailey is at his best with the ball in his hands where he is the one making things happen. He gets his teammates open for easy shots when he drives or makes a move. As for defense, Bailey comes in as the best perimeter defender in the class of 2022 and will surely cause problems for any opponent.

Bailey will start as a freshman and with how projections look, he should be a lottery pick in the upcoming NBA draft.

Adem Bona improved his standing this summer, performing extremely well at the U20 European Championship in July and in well-scouted scrimmages against NBA players in LA, where he has demonstrated a much higher skill level than anticipated. He's now a projected first round pick pic.twitter.com/Rn2iiZpJ53

Bona comes into UCLA as what will be soon to be known as the anchor of the defense. Bona runs up and down the court like a guard and can jump into the rafters. Bona will have no problem moving the ball through or over people if needed. As for the defensive side, he uses his brute strength as well as his skill to shit down those taller than him.

Bona should start this season and just as well should be drafted in the first round.

Official now it’s time to get to work! Looking forward to being coached by ⁦@CoachMickCronin⁩ and being a part of an outstanding basket program at ⁦@UCLAMBB⁩ ⁦@Compton_Magic⁩ ⁦@AZCompass_Prep⁩ pic.twitter.com/kFNIRBAm2Q

As a freshman, he will see the floor little however he may just be the future point guard of UCLA.

The 6-7 small forward from Italy comes in as what will be a backup small forward however once he grows and develops his game he can easily become a starter for the Bruins.

One thought on “In-Depth On Top 2022 Recruiting Classes: UCLA Bruins”