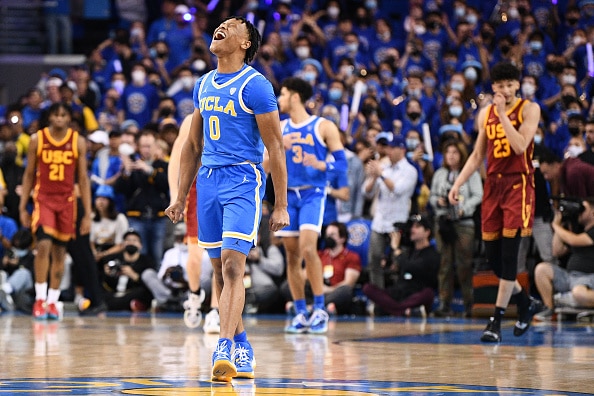 An incredibly loaded roster has the UCLA Bruins in a position to return to the Final Four for the second time in three years.

CBB Review is once again ranking the top 100 teams heading into the 2022-23 season. Each day we will reveal the next team until we reach the team slotted at number one. Coming in ranked number 10 are the UCLA Bruins.

After their surprising run to the Final Four two years ago, many people expected a lot out of the Bruins last year. They were still good, but nowhere near elite status, and ultimately lost to UNC in the Sweet 16. This year, they bring back two of the best players in the country Jaime Jaquez and Tyger Campbell, along with talented freshmen Amari Bailey and Adem Bona.

Before the move to the Big Ten, the Bruins want to bring pride to the Pac-12 once more, and this is their opportunity to do so.

Bruins’ senior Jaime Jaquez Jr. (@jaquez_jr) has been named to the preseason watch list for this season’s Julius Erving Small Forward of the Year Award.

Don’t let the average numbers fool you, Jaquez is one of the best players in the country. He is a do-it-all guy and has a read on the game like few. If Jaquez was fully healthy during the tournament, who knows how good they could have been, but as the star of the team now with Juzang gone, buy stock now.

UCLA freshman Adem Bona (@adembona) has been named to the preseason watch list for the Kareem Abdul-Jabbar (@kaj33) Center of the Year Award.

The UCLA Bruins have a ton of talent, but one position that remains a question is the center position. They are really relying on Bona to play like a top-20 recruit because their depth doesn’t support an off day from him. If he can be an absolute post beast like many project, then UCLA can be a top 5 team in the country.

If he has those freshmen struggles and UCLA takes on a team with solid big men, the Bruins could be in serious trouble. UCLA will have to go up against Oscar Tschiebwe, and if Bona can’t hold his own, then the UCLA Bruins will have no chance in that one.

Since Mick Cronin took over, the UCLA Bruins have played slow, finishing towards the bottom of the country in pace, according to KenPom. The year before, they finished 341th, and 325th the year before that. So, if you’re looking for fast-paced basketball, switch the channel, but their slower tempo allows them to set up the offense and settle for the better shot, which has been their key to victory since Cronin took over.

We all know the Pac-12 hasn’t been much of a threat in recent years, and it’s looking like the UCLA Bruins vs the field this year. The Jaquez-Campbell duo will be a problem for many teams, and the additions of Bailey and Bona could push them to that next level.

One concern is the lack of depth. No one projected not to start averaging more than 5 points a game last season, so they will need guys to step up, especially David Singleton. Mac Etienne could also be a potential breakout player after sitting out last season.

The UCLA Bruins will have a great non-conference test in the Continental Tire Main Event tournament, where they will play Illinois and either Baylor or Virginia. All of those teams are projected to be Top 25 in the country, so this will be a great early-season test to evaluate the Bruins. They also face Kentucky in mid-December.

The Pac-12 has a clear Top 4 early on, with these teams being UCLA, Arizona, Oregon, and USC. If UCLA can handle those teams, they should have no problem winning the conference with ease. UCLA students should be excited because this Bruins team has what it takes to get to the promised land.