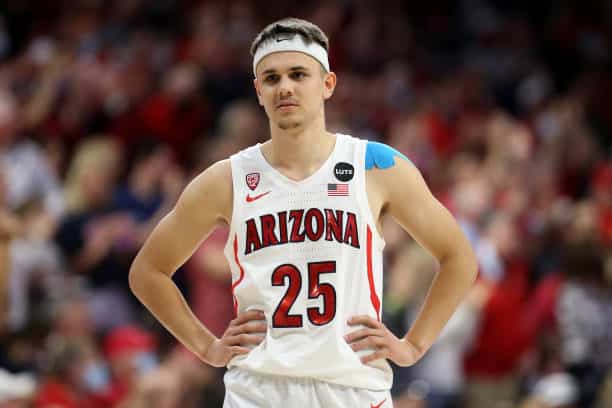 The Arizona Wildcats lost three key players to the draft, but they bring in a few players that will look to fill in the gaps for a hopeful squad.

CBB Review is once again ranking the top 100 teams heading into the 2022-23 season. Each day we will reveal the next team until we reach the team slotted at number one. Coming in ranked number 13 are the Arizona Wildcats.

Losing three key players in Bennedict Mathurin, Dalen Terry, and Christian Koloko to the draft hurts. That trio was able to help Arizona to a one seed in the NCAA tournament where they lost in the Sweet Sixteen to Houston. They return a Pac-12 First Team player in Azuolas Tubelis who should have a bigger role this season.

Arizona was also active on the recruiting and transfer trails, bringing in 2 solid transfers and 4 freshmen that have the potential to play minutes this season. Some of the name values may not pop as much as last season, but there is still plenty of reason to believe in this Arizona team.

Tommy Lloyd will enter his second season as the head of the team. It will be another year that he will be able to implement his system and get players to fit into that.

Tubelis is coming off of a Pac-12 First Team recognition, and he will be projected to be one of the best players in the conference once again. He operates primarily out of the post for Arizona, and it will be important for him to be able to facilitate the offense from both the high and low post this season.

He is a big that has good control, and he can run the floor really well. He was one of the most efficient players in transition last season with the ability to capitalize on forced turnovers.

Perimeter shooting will be a question for him. He did not shoot great from 3, but he did take about 1 per game. If he can become a 33-35% 3-point shooter, teams will at least have to respect that outside shot. With him playing the 4 or 5, this would put bigs closing out on him on the perimeter which would allow Tubelis to use his handle and get downhill.

If Arizona wants to have another successful season, it is going to start with Azuolas Tubelis.

Kerr Kriisa will be one of the more polarizing players in college basketball. He is a fiery point guard that has the ability to light up any team on any night, highlighted by a 21-point triple-double against Utah.

Arizona is going to need consistency from him. There were a lot of games that ended with him having four turnovers or shooting less than 20% from downtown.

This year the Arizona Wildcats need him to step up and be a consistent second or third guy. He has the playmaking chops to set people up on his team, and he was very good out of pick and roll last season at both scoring and finding the open man. With how he plays and the passes he can make, some turnovers are naturally going to come. Arizona is hopeful that the number stays a little lower this season while the assists get to possibly six a game.

Ultimately, this team will need Kriisa to shoot well and consistently. He shot 33.6% from three on the season, while taking 7.2 per game. Most of his shots are 3s, and they are a fairly even mix between pull-ups and catch-and-shoot opportunities. Per Synergy, Kriisa was in the 79th percentile on pull-up jumpers and the 61st percentile on catch-and-shoot attempts.

One positive to take away about his shooting is that he shot 35.9% from 3 in Pac-12 play, per Kenpom. That put him at the 18th-best percentage in the conference. If that number becomes more of the norm, it will be a huge boost for the Arizona Wildcats.

The Arizona Wildcats want to run and run and run. They are built on bigs that are long and can move up and down the floor. They do not force the most amount of turnovers, but they will be looking to push make or miss. I expect that to happen once again this season.

The Arizona Wildcats will once again be a fun team to watch with their up-tempo pace and skilled scorers. They will have a few tough non-conference matchups that will be telling about their roster. They have a first-round matchup against Cincinnati in the Maui Invitational. They will play either Ohio State or San Diego State after, both of which will be very quality matchups. Besides the Maui Invitational, they also have a neutral site game against Indiana and a home game against Tennessee.

The Pac-12 seems to have a pretty clear top four, and Arizona is in the midst of it. If they want to repeat as champs, they will need players like Kriisa, Tubelis, and Larsson to provide more. Look for Pelle Larsson to be a potential breakout candidate, as he put up solid numbers in a more limited role last season.

The offense projects to be elite once again, and a lot will come down to defense. If they can have a great defense again, there is no reason this team can’t do as well as last year’s team.