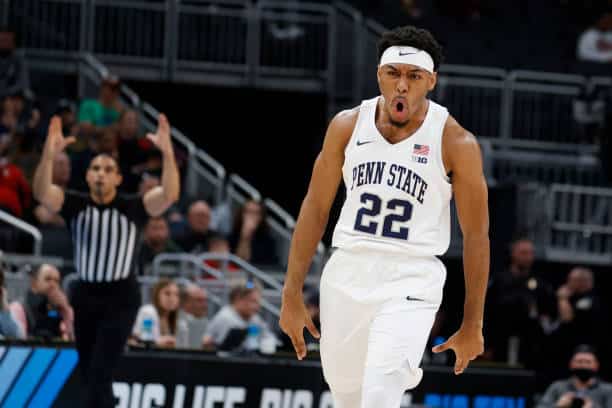 The Penn State Nittany Lions have the experience and talent to shock the college basketball world this season.

CBB Review is once again ranking the top 100 teams heading into the 2022-23 season. Each day we will reveal the next team until we reach the team slotted at number one. Coming in ranked number 79 are the Penn State Nittany Lions.

In this day and age of transfers and players leaving early for professional basketball ventures, it’s rare to see a team with as much experience as the Penn State Nittany Lions. They boast six combined seniors and graduate students, and will likely have a starting lineup consisting of all upperclassmen. That includes Mikey Henn, who will suit up for his unprecedented fifth team and seventh year in college basketball (he sat out one, got a medical hardship for another, and COVID rules granted him another year.)

It’s a team built on returners and highly sought-after transfers. Even though the Big Ten is loaded like usual, Penn State is an absolute darkhorse to win the conference.

The leader of Penn State basketball, Pickett was a star at Aquinas Institute in Rochester, NY before heading to Siena. He blossomed there and transferred to Penn State last season where the adjustment was not too much for him. Pickett led the Nittany Lions in points and assists per game.
With all the senior leadership on this team, Pickett should have an easy time getting buckets and setting others up. It almost seems like a make-or-break year for Penn State, thanks to all the returning upperclassmen they have.
It should also be a fun season for Pickett, who is chasing some pretty high accolades. Heading into the season, Pickett has 598 career assists. If he averages around 5.0 per game (which could be lower than what he’s capable of), he could finish his career inside the top 50 in career assists in college basketball.
There’s little to no doubt that Pickett is the star of the Penn State Nittany Lions, and that’s saying something, considering the talent they have.

The one iffy part of Penn State’s roster is its bench. They do bring in a solid recruiting class and Dallion Johnson, who started a good chunk of games last season. But without question, Andrew Funk will need to lead the bench, and could possibly get some starting time, depending on him Camren Wynter is solidified as a starter.

Regardless, projecting Funk as the sixth man is another reason why Penn State fans should be excited about the upcoming season. He was a scoring machine at Bucknell, with the ability to hit contested shots from deep and mid-range.

Of course, the transition to the Big Ten and sharing the court with more talented players will mean Funk’s averages will drop down a bit, but if he can average around 10 points per game off the bench, it takes the load off a younger bench to score.

Last season, the Penn State Nittany Lions had one of the best defenses in the Big Ten, ranking first in field goal percentage allowed vs the average opponent. Unfortunately, the Big Ten was arguably the best scoring conference in college basketball, so it still didn’t leave much room for error.

However, that’s the identity of this team. So many people like to point to the offensive stats this Nittany Lions team has, which is true. But this team will be successful because of interchangeable guard/forwards, with most of them happening to have a lot of strength.

A senior-led team, I expect even more improvements on the defensive end on a team that already held their own in 2021-22.

Here at CBB Review, we compile all of our analysts’ rankings to come up with #CBBRank. There are bound to be disagreements within each other’s thought processes.

I’ll put it here plainly. I think we totally dropped the ball on Penn State. To me, they look like a top 40 team on paper and could even be a second-weekend team in the NCAA Tournament.

Of course, the Big Ten has talent all over the board, so it’ll be a gauntlet of a schedule. But with three impressive senior guards, Penn State should have some of the best ball movement in the conference. Myles Dread and Seth Lundy are two undersized forwards who get the job done in the paint and can play on the wing. Michael Henn has as much experience as anyone in the country with 117 career games under his belt.

We should get a fairly good assessment of what Penn State is made of in the non-conference. After two buy games, they host Butler in the Gavitt Games. Furman should be a good test against a solid mid-major in the Charleston Classic. Then, they’ll play the winner of Old Dominion/Virginia Tech and one of College of Charleston/Colorado State/Davidson/South Carolina. They’ll also play at Clemson to round out November.

The biggest downfalls of this team could be their bench and a lack of winning games under their belt. But there’s got to be a year for everything, right?