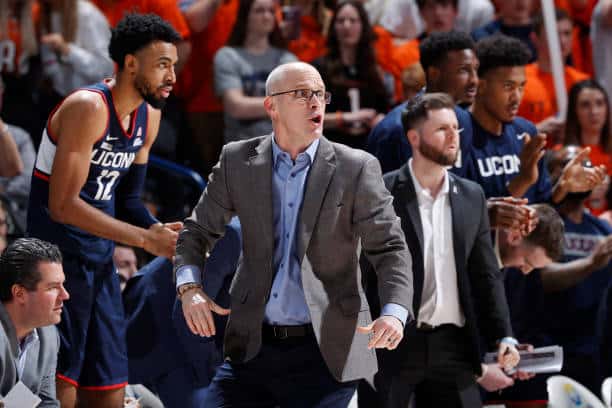 Big East basketball recruiting often flies under the radar as the conference has built itself on developing four-year players in the one-and-done era.

Even though that’s the way things are done in the Big East, it hasn’t stopped some of the best high-school seniors from committing to teams in the conference.

The Pirates beefed up mainly through the transfer portal but did bring in Tae Davis, a former Louisville commit. He made it a two-for-one deal as his brother, Dre Davis, transferred from the Cardinals to join Sha Holloway and co. Tae Davis is a lanky scorer who can also hit the boards.

Expect Seton Hall to try and turn Davis into the next Jared Rhoden – a project at first, but one that has untapped potential. Confidence and strength are the main attributes that Davis needs to boost but he’s already a skilled player, especially on the break.

Anglin might be the best overall three-point specialist coming into the Big East in this freshman class. At 6’2″, the shifty guard can also create separation from taller defenders, making him more than just a spot-up shooter.

He comes in as a four-star rated recruit by 247Sports at a time in which Georgetown basketball needs a program-changer. While Anglin might not be able to accomplish that all by himself, he could help move the Hoyas in the right direction.

Like Anglin, Pierre is a smaller guard, listed at just 6’1″. However, he scores in bunches thanks to his terrific nose for the basketball on defense. Not a surprise that Ed Cooley went out to go grab such a talented defender.

Pierre reminds me of current Seton Hall guard Kadary Richmond. He’s a better three-point shooter than the Seton Hall point guard, will also keep defenders off-balance with his dribble moves, and will never be over-matched in transition. Pierre isn’t getting as much love in the 247Sports cycle, but his game is all about hard work which almost always translates in the Big East.

A graduate of IMG Academy, Storr had offers from Kansas, LSU, and Illinois, but chose to go to St. John’s. He’ll be joined by transfer Andre Curbelo, forming one of the deadliest backcourts in the Big East.

The 6’5″ guard can score from inside and out. Most importantly, he’s a big guard who attacks the rim and doesn’t settle. In the Big East, you need to have that dog mentality, and Storr doesn’t have to be asked twice about that.

The Donda Academy superstar has seen his stock fall, but is still one of the most talented players coming into the Big East in 2022. Cruz held offers and went on visits to practically every major college basketball team and once had a top three of Auburn, Creighton, and North Carolina. Cruz reopened his recruitment and decided to commit to playing at DePaul in February.

The biggest upside about Cruz is his pure athleticism. He looks like he was born to play basketball and his future development is more about basketball IQ and physicality. But as far as pure scorers go, Cruz is arguably the top in this incoming class in the Big East.

Kam Craft is a knockdown shooter but really gets you on the drive. Craft’s ability to blow by defenders with a quick dribble move – or with a simple fake – and finish at the rim is what sets him apart.

Craft’s range and efficiency from three are undeniable but you really can’t ignore his moves. He’ll free any defender one-on-one and either pull up or take you all the way to the basket.

Xavier really aced this recruiting class, at least on paper. Some people actually rank Craft ahead of Claude, but I was blown away by Claude’s elusiveness in getting to the basket. He’s got the best layup package of any incoming freshman in the Big East but can also score from the mid-range and behind the arc.

Claude’s smoothness on the basketball court also allows him to run a very steady point guard position and should pair him well next to Craft for their time together in Cincinnati.

Practically this entire list of incoming Big East players are from New Jersey, but Armstrong’s hometown is interesting. He’s from South Orange but chose to play at Villanova instead of Seton Hall, which is literally located in South Orange.

We’ll see how that ‘rivalry’ plays out down the line, but as far as Armstrong’s skill set, he’s got the most mature of any incoming Big East guard. Armstrong plays with poise, but also has a knack for throwing down some thunderous slams on the break. As Villanova transitions from Collin Gillespie, Armstrong is in line to become the next great Wildcat point guard.

The only big man on this list, Clingan is huge enough to cover multiple spots. At 7’1″ and 255 pounds, he’ll pair up with Adama Sanogo to form quite possibly the most frightening frontcourt in the entire country.

The Connecticut native has posted some absurd numbers against good competition, going off for 45 points and 23 rebounds in a game against Northwest Catholic (CT). Clingan also has a nice touch pass on the low block and will alter shots. His lateral quickness will need to improve to continue to succeed at the Big East level, but as an incoming freshman, he’s already got a lot of major boxes checked off.

Whitmore is by far the top soon-to-be freshman in the Big East, so there should be no surprise he’s headed to Villanova.

Whitmore is one of few guys who probably don’t even need to play a year in college basketball, but will anyways. The McDonald’s All-American is a highlight reel dunker who won’t shy away from his jumper. But as far as athletes go, Whitmore is top-notch.