College Basketball: 5 Upsets to Look for in Week Four 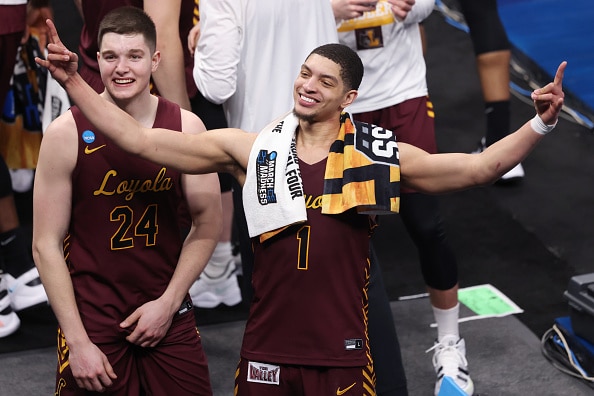 These college basketball teams might be caught napping after their eating their Thanksgiving leftovers.

We got back in the win column here at mid-major central! Last week I went 1-4, but correctly picked the second-best upset of the week with Iona toppling previously 10th-ranked Alabama. Once again, every other outcome came close to making me look like a genius. Loyola-Chicago and Georgia Southern lost by two in the final seconds of their games. George Mason lost by three to Washington, while Wofford was the only pick last week to lose by double-digits.

My overall record now sits at 3-12 on the season. Adding to the Iona pick from last week, The Citadel and Furman also made me look good with upset wins in the first week of the season. The slate is a little lighter with the ACC/Big Ten Challenge and a round of league play beginning for some, but there are still some juicy underdogs out there waiting for a bite out of the college basketball upset burger.

The Georgetown Hoyas did, in fact, make the NCAA Tournament last season. I put that reminder out there for fans in case they need some good recent memories to think of. Otherwise, Georgetown is back to its old ways under Patrick Ewing. The Hoyas already have losses to Dartmouth and St. Joseph’s this season, two teams that they would never have lost to when Georgetown was a team to be feared. If the Hoyas aren’t making three-pointers, they aren’t making much of anything else so far this season. Furthermore, this is a team that is lacking depth.

On the flipside, the Longwood Lancers are quietly improving as a program under Griff Aldrich. Longwood’s most impressive victory to date is a 27-point thrashing of UMBC. Now, this is their chance to slay bigger dragons. The Lancers like to play slow, and they defend the three-point line at one of the best rates in the country. They are a scrappy bunch that will fight for every loose ball and protect it when they are running their offense. If they can keep Georgetown from hitting their deep balls, they’ll have a shot to return to Farmville victorious.

Oregon’s pre-season ranking has evaporated after a 3-3 start. The Ducks are just 1-3 against NCAA Tournament-caliber teams, and that’s only if you believe SMU is capable of reaching the Big Dance. When Oregon loses, it loses ugly, with point totals of 49, 50, and 49 in those three losses. Promising transfers in Quincy Guerrier and De’Vion Harmon just haven’t panned out yet this season. The defense is solid, but it doesn’t matter if their offense can’t keep pace.

UC Riverside is off to a 5-3 start this season, dropping a game to St. Mary’s before this match-up with the Ducks. Now, the Highlanders’ numbers aren’t the sexiest thing in the world either. However, it’s worked so far, including a win over another Pac 12 team in Arizona State. They’ve also relied on the strength of their defense, which has better rankings in most categories than Oregon in KenPom. Callum McRae will be a tall task inside for the Ducks to handle, while Zyon Pullin is an underrated backcourt player. UCR won’t be intimidated in this one and has what it takes to pull off the upset.

TCU has started off 5-1 this season, though the Horned Frogs results against higher-tier opponents have been a bit closer. Their only loss came to Santa Clara, who is quietly off to a solid start in the WCC. However, it was also TCU’s only true quality game, and they came up short. One sore spot that stands out is how poorly this team takes care of the ball, with a turnover percentage on KenPom that’s sub-270. They can also struggle offensively at times, especially from deep.

Oral Roberts fans may feel like last season’s Sweet 16 run is so far away. The Golden Eagles are just 4-3, including 1-3 against Division I competition thus far. However, things looked a bit more promising after they lost to Oklahoma State by just one in overtime on Friday and defeated Tulsa last night. The defensive side of the ball is where they are struggling right now, but offensively they still have Max Abmas. ORU also doesn’t turn it over much when they are looking to score. They have heavily relied on the three-point shot so far this season, but if those shots can drop and Abmas can do what he’s capable of, they could come out of Fort Worth win a big win.

The Wolverines sit at a surprising 4-2 after losses to Seton Hall and Arizona. Now, those aren’t bad losses by any stretch of the imagination. However, there were many that thought Michigan would pick up where they left off last season in rolling through their schedule. Eli Brooks and Hunter Dickinson are still doing their things, and I think it’s safe to say that this group will be just fine throughout the season. However, they do have to cut down on turning the ball over and improve their interior and free-throw shooting.

The San Diego State Aztecs just keep on playing suffocating defense. The calling card of the program continues on, with their defensive shooting rankings all ranking top 75 or better in KenPom. Offense has been a little harder to come by early on, with Cal transfer Matt Bradley leading the team with 13.2 points per game. The advantage that SDSU has is the slow pace they often force because of their defense. Thus, they can stick around games if they can control the pace. This game has the makings of a slugfest. Winning in Ann Arbor is no easy task, but if there is a team that’s built for it, it’s San Diego State.

Some may think it’s unfair to pick on DePaul, but give the Blue Demons some credit. They are off to a 6-0 start to the season, including a victory over Rutgers thus far. Javon Freeman-Liberty has been balling out of his mind so far, averaging an insane stat line of 23.5 points, 9.2 rebounds, and 4.7 assists per game. David Jones and Brandon Johnson have been solid as well, with each averaging at least 12 points and eight rebounds per game. However, this group has relied heavily on its starting five and don’t defend the deep ball well.

Loyola-Chicago is looking to continue its dominance over its city brethren. The Ramblers have already taken care of Chicago State and UIC this season. They are coming off of a 1-2 showing at the Battle 4 Atlantis, but both of those losses were hard-fought against Michigan State and Auburn. Loyola’s combination of high-percentage shot selection and stout defense make them a hard out any night. Furthermore, the Ramblers rank just outside the top 10 in three-point shooting. Perhaps Loyola ends up being favored in this one according to Vegas, but it’s still a college basketball upset in terms of league affiliations.

One thought on “College Basketball: 5 Upsets to Look for in Week Four”