College Basketball: 5 Upsets to Look for in Week Five 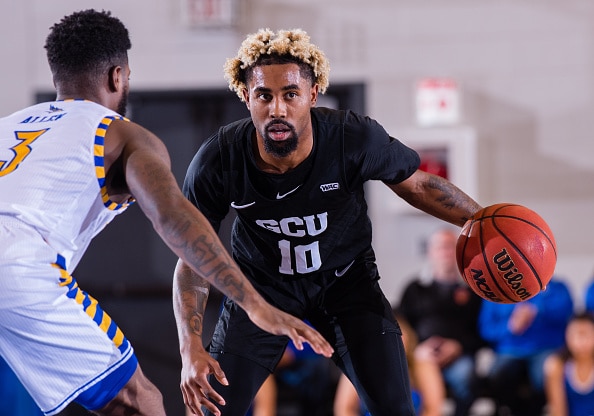 With exams approaching at many schools across the country, these college basketball teams might be set to fail a test.

Another week, another 1-4 record. Shoutout to Loyola-Chicago for squeaking out a 68-64 road win at DePaul. With the win, the Ramblers moved to 3-0 against other schools from Chicago on the season. Once again, the rest of my picks were close misses, other than San Diego State’s 14-point loss to Michigan. Longwood, UC Riverside, and Oral Roberts all fought hard, but ultimately fell by single digits.

We’re now sitting at 4-16 on the season for this column. Loyola-Chicago joins Iona, The Citadel, and Furman on my shiny list of success. After a round of conference play across many leagues last week, we’re back to more match-ups to choose from this time around. Here are five mid-majors who have done their homework and hope to pull off the next big college basketball upset.

First, let’s give props to the Cavaliers for taking the rare road trip to a mid-major arena. This is something that I think should happen more and more, so hopefully this can start a trend across the sport. Virginia enters this game at 6-3, barely surviving a lowly Pitt team in their ACC opener. It’s the same old story here. The Cavaliers play excellent defense, but struggle to find their offensive rhythm at times. They are still trying to find that go-to guy in clutch situations. Everyone keeps saying Virginia will be fine, but I’ll believe it when I see it.

James Madison comes into this match-up at 7-2. The Dukes are emerging as one of the early favorites in the CAA after their early-season results. This is a group that likes to play up-tempo, getting quick shots on offense and creating opportunities by forcing turnovers defensively. JMU is at their best when they are getting to the free-throw line. The contrast of styles will be something to watch in this game. Expect a packed gym decked out in purple, and also expect the Dukes to have a great chance in this one.

I will tip my cap to Georgetown for making me look bad last week. The Hoyas survived Longwood by eight. But, let’s be honest, fans wish they would survive by 28. This group continues to struggle to make shots that aren’t from deep. They also continue to struggle to defend the three ball. Georgetown’s numbers just to continue to look average at best, even though they eked out the victory.

UMBC has carried on its success under new coach Jim Ferry. The Retrievers play a similar tempo to Georgetown, which should keep them around in this game. This is one of the best offensive groups in the country. They have the fourth-best free-throw percentage in the country, and they also take care of the ball on offense. Most importantly is their three-point shooting, which ranks just inside the top 40, compared to Georgetown’s poor defense in that category. I expect UMBC to light up the Hoyas, just like you’re lighting up your Christmas trees this week.

We go to the west coast on December 8th now, where Washington State welcomes Weber State in a late tip on the east coast. The Cougars have NCAA Tournament aspirations this season, though they haven’t done much to move the needle there yet this season. Furthermore, this group already has a loss to a Big Sky team, and Eastern Washington is not as good as Weber State. The Cougars can be prone to turning it over too much while also not forcing many turnovers on the defensive end.

This will be Weber State’s biggest test to date, but they will be ready to go for this one. The Wildcats have four scorers averaging double-digits, with Koby McEwen‘s 16.8 points per game leading the way. This is yet another mid-major that wants to push the ball as fast as they can. Furthermore, they are one of the best shooting teams in the nation. The Wildcats will absolutely test a Washington State defense that’s been solid thus far. If Weber State can play the game at their pace and put the Cougs behind early, they’ll have a chance.

With a nickname like Sun Devils, you would think Arizona State would be on fire. However, they possess an offense that is ice cold. They don’t make threes. They don’t make twos. And they definitely don’t make free-throws. That means they play good defense, right? Those numbers are better, but nothing to call home about. The Sun Devils are also very susceptible to giving up their fair share of deep balls. Now, you could attribute some of this to playing a tough schedule so far, but you can only use that so much to explain what’s going on in Tempe.

Grand Canyon entered this season fresh off their first NCAA Tournament appearance in school history. The Antelopes may very well have been the best team in their state last season, and they are looking to stay in the running for that this year in this game. GCU is one of the best offensive rebounding teams in the nation, ranking sixth on KenPom. The Lopes also shoot the deep ball well. Defensively, they will make you work for every shot. Truthfully, Grand Canyon may be the better team, but they’ll have to prove it by coming out of this one victorious.

Hello, Pittsburgh, my old friend. The Panthers are one of four teams that I have correctly picked to lose this season. Now, I’m jumping back on their bandwagon for all the wrong reasons. The Panthers have already fallen to The Citadel and UMBC this season, and they struggled to just to earn the two wins they do have. It feels like it’s just a matter of time before Jeff Capel gets the hook at Pitt. To be fair, they came close to beating both Minnesota and Virginia in their last two games. However, there just isn’t any reason to feel good about their chances in most games moving forward.

Monmouth will enter this game having just come off their first two league games of the season as well as a big game against St. John’s. The Hawks have the best free-throw percentage in the country, making 85 percent of their attempts. They are also ranked in the top 20 in three-point shooting. Both of these teams are heavily reliant on their starters, so fatigue could become a factor. However, this is a team you don’t want to be in a close game with late. Give me Monmouth for my second correct pick over Pittsburgh this season.