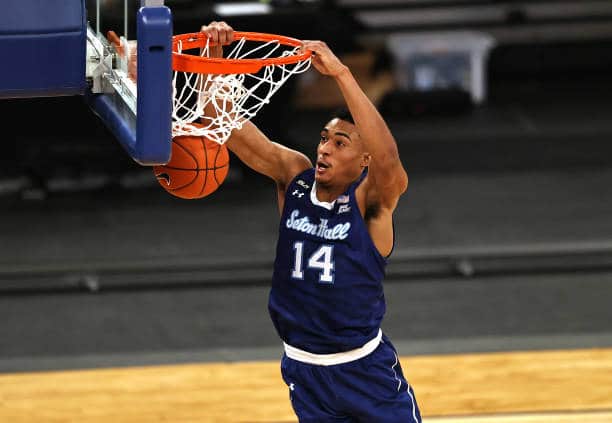 Kevin Willard has once again scheduled tough for Seton Hall basketball. Here’s how the Pirates might fare with plenty of quality win opportunities.

Seton Hall basketball head coach Kevin Willard doesn’t back down from scheduling the best of the best to get the Pirates fit for the Big East. The difficulties often give Seton Hall convincing resumes to bring to the table for NCAA Tournament seeding.

In the past five seasons alone, Seton Hall played the following teams, making an argument that they’ve had the hardest stretch of non-conference basketball in that time period:

For those counting, that’s 30 quality games against 25 power-five opponents, eight of whom were ranked, and a not too shabby record of 16-14 overall. The Pirates have been even better against ranked teams, going 5-3 in such games.

Seton Hall basketball will face an incredibly challenging list of non-conference foes in 2021. Although top-25 rankings won’t come out for over a month, the Pirates could end up facing five ranked teams. At the bare minimum, it seems like the Hall will have at least two games against nationally-ranked opponents.

The full slate of games has additional challenges and a few tune-up games in between. Since it’s finalized, it gives Pirates’ fans a chance to set realistic expectations of which games they should or shouldn’t win.

Seton Hall will face off against a New Jersey rival in its first game of the season. It’ll be the first of four games against power-six teams for the Knights. FDU struggled last season going just 9-15, so this is really just a game for Seton Hall to gain confidence and rhythm before the schedule gets into full gear.

The Ivy League canceled the entire 2020-21 college basketball season, so this will be just Yale’s second game since March 7, 2020. That season, and quite often, the Bulldogs played stellar defense, keeping Clemson to just 45 points and North Carolina to 70. They’ll be one of the toughest teams to get a grasp for, given an entire year off from college basketball, so it could be a closer game than some people will expect. Either way, the Pirates are the better team.

The Wolverines probably should be one of those ranked teams I alluded to before. Add that to the fact that this will be a road game in one of the most raucous venues in the Big Ten and Seton Hall will need to play a near-perfect game to come away with a win. That’s more than possible – the Pirates have done it before – but the undefeated dreams will most likely end here for Seton Hall basketball in 2021. Just don’t remind the Pirates of 1989.

Another quality game with the potential of a ranked Buckeyes team, I have Seton Hall coming out on top in this one. Seniors Duane Washington Jr. and C.J. Walker have moved on from the program, leaving a few question marks in the backcourt for Ohio State.

They brought in Cedric Russell from Louisiana and still have E.J. Liddell, Zed Key and Seth Towns, so don’t completely write them off, but a Pirates’ backcourt of Byrce Aiken, Kadary Richmond and Myles Cale seems superior and could be the difference.

Even though this would be the championship game of the Fort Myers tip-off, either Florida or Cal would be an easier opponent than Ohio State. I’m picking the Gators to advance, but the Pirates to take home the early-season tournament title. Losing Noah Locke, Scottie Lewis and Tre Mann is huge for Florida basketball, who will look to go inside this season. However, that strategy is bold against a Pirates team with Alexis Yetna (6-8, 225), Tyrese Samuel (6-10, 230), and Ike Obiagu (7-2, 265) who all figure to be solid rotation players this season.

After a very tough three-game stretch, it will be nice for Seton Hall basketball to get a few cool-down games at home. Bethune-Cookman seems to be one of the easiest opponents on the Pirates’ schedule. Like Yale, their entire 2020-21 season was canceled due to COVID, but they did go 16-14 the year prior. However, a 79-44 loss against Texas Tech should be all you need to know.

The Pirates have played the Wagner Seahawks four straight years, so this year will make it five. Seton Hall’s put up at least 85 points in three of those four games, so I’m going to continue with that trend as the Pirates hit 90 for the first time this season. They’re rolling into this game based on my predictions, and the talents of Jared Rhoden and Myles Cale will be too much to defend.

Nyack isn’t a Division I team but this game will count toward the Pirates’ official record. It’s sort of impossible to predict how the Hall will come into this game, given there really isn’t a whole lot at stake other than a surefire write-off win. I’ll go with a big win because that’s how I’ve had them playing to this point, but don’t be surprised if bench players see more minutes and scoring is lower than you’d expect.

I’ve been in favor of Seton Hall basketball up to this point, but this is where the winning streak ends. Don’t let the Longhorns’ round of 64 bounce discourage you from picking them again this season.

They’ve got the most experienced and talented backcourt in the country (Andrew Jones, Courtney Ramey, Devin Askew, Jase Febres and Marcus Carr), a nightmare on the wing in Timmy Allen, and a first-year coach in Chris Beard who’s had his share of success coaching Texas teams. Numerous other pieces make Texas a national championship contender in my eyes, and they’ll be too much for the Pirates, even inside the Prudential Center.

The real New Jersey battle, these two didn’t play last year and Rutgers won last in 2019, putting a lot of pressure on the Pirates, especially if they’re coming off a home loss three days before. With that being said, Geo Baker and Ron Harper Jr. are going for one more round, and that should scare Seton Hall fans.

I see the Pirates having the lead in this game and with plenty of chances to win, but in the end, the Baker-Harper duo is more experienced in these types of games. This is probably the evenest matchup on Seton Hall’s non-conference slate, so I’d like to put their record at 7.5-2.5 instead, but since that isn’t possible, I went with a Scarlet Knights’ win.

First off, a big props to both teams for getting this game done. Iona and Seton Hall have gone hand in hand in recent years, with many coaches and even athletic directors from both sides switching places. The biggest intrigue, however, is the Rick Pitino vs Kevin Willard matchup, as Willard used to coach under Pitino at Louisville. All of that put aside, this game should go to Seton Hall basketball. The Pirates are the better team, and although Iona is sure to give them a run for their money at a neutral site, SHU will come away with the win, capping off the non-conference schedule.