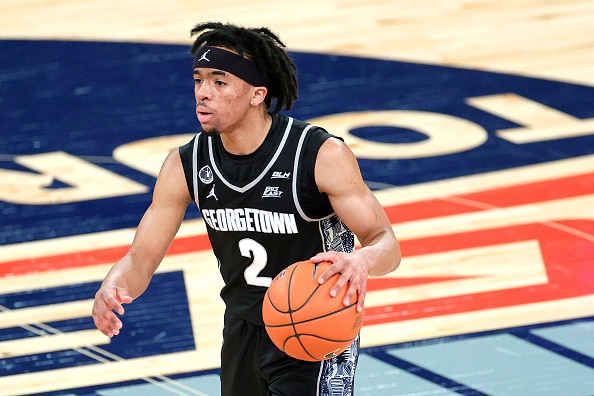 Georgetown basketball looks to build on their momentum after winning the Big East auto-bid last season.

Georgetown basketball salvaged a rough season in 2020-21 by making a run in the Big East Tournament. The Hoyas shocked everyone by stealing a bid before bowing out in the first round of the NCAA Tournament. Overall, they finished 13-13 (7-9 Big East), but the optimism from the end of the season has fans wondering if the tide has finally turned under Patrick Ewing.

Looking at the current state of the Georgetown basketball roster, there’s a lack of star power. The guys from last season that were key contributors have largely moved on. So, if you’re looking for one candidate to be the guy, why not take the proven commodity? Tre King joins the Hoyas from Eastern Kentucky, where he was a First-Team Ohio Valley Conference selection. He was a force down low for the Colonels, and is looking to bring that same energy to the Big East. Adjusting to a new and better league might tamp his stats down a bit. However, he may be what makes this team go in 2021-22.

Guard play is so important in college basketball. Jahvon Blair was the leader in the backcourt last season, but he is gone. Dante Harris is expected to take over at the point full time. He started 21 games as a freshman last season, and contributed a decent amount. There are going to be a lot of guys having step up this season, so his ability to step into a leadership role as the point guard will be extremely important. Harris showed glimpses of his talent last season, so if he can avoid a sophomore slump, that will be a good sign for Georgetown basketball.

Georgetown’s bench is very inexperienced outside of Kaiden Rice. The grad transfer from The Citadel is a weapon from beyond the arc with the ability to rack up points in a hurry. Otherwise, players like Kobe Clark and Malcolm Wilson have minimal experience coming in to spell the starters. Collin Holloway figures to get some time as well, but has the same lack of experience. Beyond the returners, the incoming recruiting class has some talent, but will have to adjust to the college game.

KenPom had Georgetown basketball ranked just 312th in steal percentage, meaning opponent’s stole the ball on 10.7 percent of the Hoyas possessions. Furthermore, their non-steal turnover percentage sat around the same rate, ranking 252nd. Georgetown had more experience last season, but still struggled to take care of the ball. With a younger and less experienced lineup, those numbers could potentially get worse, making things tough.

Georgetown basketball appears to be in a potential transitional stage, with many guys needing to step up their roles. Fans can hang their hats on the team finding their way into March Madness last season, but I’m not sure that means things are truly on the upswing.

The success of this team will hinge on the ability of this group to come together and find their chemistry. It will also depend on how well guys like Tre King and Kaiden Rice can adjust to playing in a power conference.

A wild card here could be the use of the highly-talented freshmen. If Coach Ewing deploys them and they make positive contributions, perhaps that pushes the Hoyas into another tier of competitiveness. Georgetown has the potential to hang around the bubble conversation, but it’s going to take a team effort to get it done.

Projected Postseason Finish: Round of 64/NIT

Postseason Ceiling: Round of 32 exit