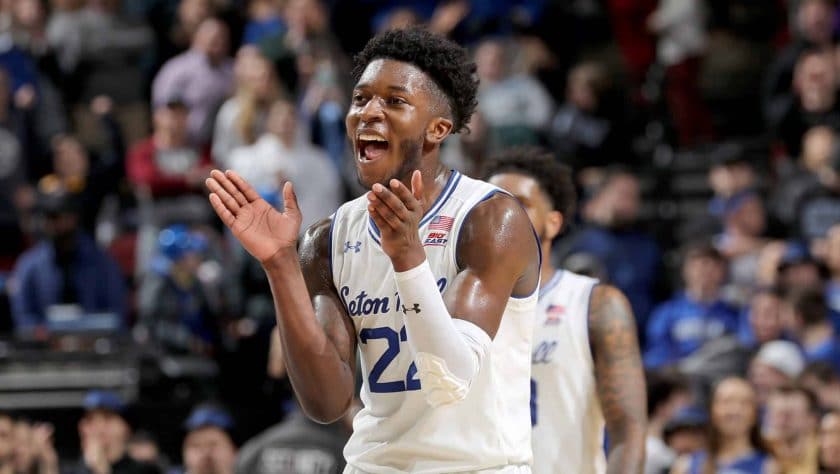 Seton Hall basketball is on to its next talented senior as Jared Rhoden looks to lead the Pirates to March after a rare year off.

Seton Hall basketball had some growing pains moving on from Myles Powell to Sandro Mamukelashvili. Now with Mamu gone, head coach Kevin Willard has a new star in Jared Rhoden. Rhoden will have a veteran group around him with some solid added transfers and a top-100 recruit. South Orange loves its basketball and the Pirates are looking good heading into the season.

I’m expecting big things out of Jared Rhoden, who put up extraordinary numbers last season in the shadow of Mamukelashvili. This year, it’s all Rhoden’s team, and look for him to put up even better numbers and vie for the Big East Player of the Year.

The next level for Rhoden would be becoming a knock-down three-point shooter. He’s tough to guard on the drive and has a killer mid-range jumper, but has never been able to consistently drill it from deep. Adding that to his bag of tricks would make Rhoden close to unstoppable on the offensive end for Seton Hall basketball.

As far as a winner and taking control, that’s where Rhoden must rise to the occasion. He’s been great to this point but never has he had to shoulder an entire team. Of course, there are plenty of good pieces around him, but we’ll get a good feeling for if he has what it takes to truly lead a team during the Pirate’s brutal non-conference slate.

Bryce Aiken is another one to put here, but given he hasn’t played close to a full season since 2016-17 (yes, he’s been in college that long), it might be time to accept that his body just won’t allow it.

Samuel on the other end, has always been fully healthy but has never come close to his potential. He’s a big body that can shoot threes, but often played a bit timid inside and resorts to his outside game. With Mamukelashvili gone, it opens up the four-spot for the Pirates, and Samuel is expected to battle Alexis Yetna for the job.

Willard might end up switching between the two throughout the season, as he rarely uses just one lineup for the entirety. However, if Samuel plays tougher inside, he has the more complete offensive game given his athleticism. It would also be another dimension for Seton Hall basketball, who are loaded at guard but trying to find a big man that can be the leader of the pack.

Kevin Willard likes to go deep and he’s got at least three very solid options that should get a lot of minutes this season. Yetna will battle with Samuel and Obiagu for one of the starting big men jobs. Harris and Weston are both very talented scorers that will offer their points when the Pirates hit dry spells. Weston could end up being one of the top guys by the seasons’ end, but there’s a lot of senior talent ahead of him and especially at his position.

I mentioned Aiken briefly. He’s shown what he can be at best – a knockdown shooter from anywhere a step over halfcourt. However, a receipt of injuries really tells the story, making it hard to give him a consistent role to not mess with the rotation.

Long is a true wildcard. Willard often doesn’t give freshmen a lot of chances, and Long certainly didn’t prove himself last year. But take this: Rhoden averaged 3.0 points as a freshman and Mamukelashvili averaged 2.6. Not everyone is a Myles Powell, so maybe the sophomore year will be the big one for Long.

Seton Hall basketball also has a few other freshmen that could make noise. Ryan Conway is a scoring point guard and Tyler Powell, well, it’s in the name. The Pirates’ bench lacks a star, but that’s okay because that’s what the starting lineup is for. They’ll make do.

It’s threes and layups for Seton Hall basketball, who ranked in the bottom third last season in mid-range shots taken per 100 trips upcourt. So how do they keep teams guessing? Insert Jared Rhoden, who is the Pirates’ star player and has a knack for knocking down jumpers inside the arc.

As far as the style of play goes, the Hall is as the middle of the pack as they come. Willard likes to change up based on the game and with in-game adjustments, so you’ll never see Seton Hall commit to one way of playing. However, expect to see a lot of hard takes to the bucket and shots from deep, with Rhoden there to keep it all even.

The brutal non-conference schedule (Michigan, Ohio State, Cal/Florida, Texas and Rutgers) could set Seton Hall basketball up pretty nicely given that’s a whole lot of quadrant 1 and 2 games even before the Big East. It’ll also prepare them, and although Sandro is gone, it’s a pretty veteran group of guys that should be set from the start.

I like the scoring aspect of this team more than last season. Mamukelashvili is a big loss, but the rest of the guys who departed are pretty standard replacements. Harris is a big-time scorer and unlike Aiken should be able to stay on the court. He could be the difference-maker.

While I see Seton Hall making the NCAA Tournament, they’re still lacking something. There’s a lot of teams out there and some are just fortunate enough to have two Jared Rhoden’s. The Pirates will go as far as his help takes them. They can win a game and maybe even two in March, but being realistic, it’s a first-weekend team.