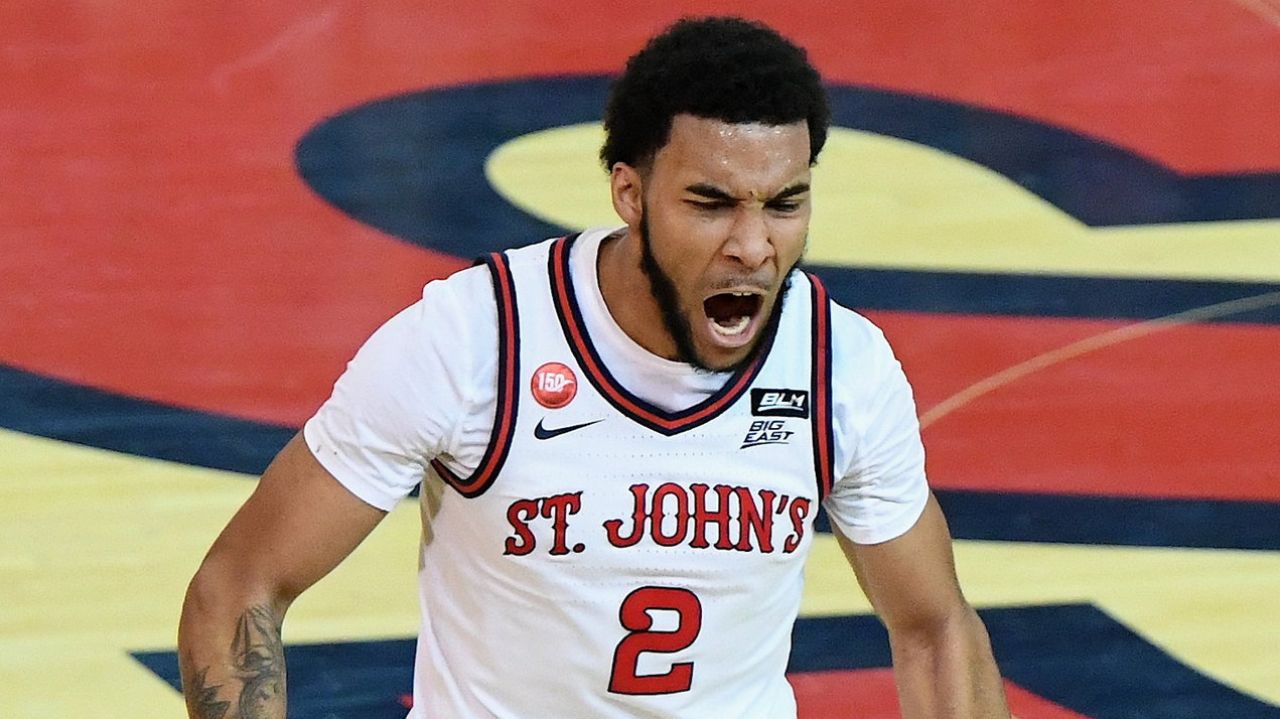 St. John’s basketball returns a preseason choice for Big East Player of the Year, a rising sophomore stud, and multiple transfers to help contend in the Big East.

Julian Champagnie, Posh Alexander and Stef Smith form one of the best scoring trios in the Big East. A that consists of another slew of talented guards will help offset a weaker frontcourt. But either way, St. John’s basketball looks to have one of its best teams in years.

With James Bouknight and Sandro Mamukelashvi no longer in college, you can insert St. John’s basketball star Julian Champagnie as the front runner for Big East Player of the Year.

Don’t expect his averages to be quite as impressive. In fact, his scoring and rebounding could dip as the Red Storm seem to have a deeper roster than last season, especially in terms of putting the ball in the basket. However, Champagnie should vastly improve as a passer and will be more efficient as defenses will have a tougher time trying to key in on multiple scoring threats.

Champagnie has the chance to be the first St. John’s player to win the award for the Big East’s top guy since Walter Berry in 1986. Since then, players from Boston College, Creighton, Georgetown, Marquette, Miami (Fla), Notre Dame, Pittsburgh, Providence, Seton Hall, Syracuse, UConn and Villanova have all won the award. That’s how talented and important to St. John’s basketball Champagnie is.

Considering Aaron Wheeler has already played multiple seasons in a power conference, his expectations are what they are and likely won’t be surpassed by any large amount. This leaves Fordham product Joel Soriano as the big man who can tie it all together for a St. John’s team that seriously lacks depth in the frontcourt.

Soriano put up good numbers in the Atlantic-10 which in all honesty should be taken seriously. But the Big East is a different animal, and Soriano is the choice for starting center. If he can play how he did at Fordham, St. John’s has a great lineup, 1-5. However, if he can’t adjust, it will make the Johnnies very guard-orientated. That isn’t the worst thing, but having a reliable center is not a lost art just yet.

The Red Storm really only loses points because their two frontcourt players are total guesses, with one being a 3-star and the other coming from Clarendon.

However, the guard play for St. John’s basketball is even more impressive, as Addae-Wusu, Mathis and Coburn are all capable of being starters if it weren’t for the other talented players ahead of them on the depth chart.

Small ball will have to be the way to go and I’m especially concerned when Wheeler or Soriano get into foul trouble. Champagnie can slide into the 4-spot if needed, but this bench will only be complete if one of the frontcourt options can give a consistent 15 minutes per game. If that can’t happen, it’ll be up to the starters to not foul and stay in the game.

Potential quick points off breakaway steals per 100 trips upcourt. St. John’s basketball ranked first in that last season, and with the defensive superstar in Posh Alexander, should rank near the top yet again.

I’m sure offenses will be more aware of Alexander’s prowess on defense, but it’s still nothing to take lightly. St. John’s will pressure the basketball and get out and run in transition. With even better players on offense this season, it should lead to some high-flying and big in-game run opportunities. The Red Storm will be a fun team to watch and a dangerous team to play against without a strong ball-handler.

St. John’s basketball will be one of the top guard-oriented teams to watch in college basketball next season. Their downfall could be the lack of big men, but where the game is headed gives me reason to believe they can get past that.

In the Big East, there’s not a lot of challengers up top to Villanova, so there’s a realistic chance the Red Storm could find themselves in the top three by the end of the season.

I’m expecting St. John’s to be an NCAA Tournament team, but don’t write it down just yet. The Big East can be a gauntlet, so they’ll have to play efficiently and come ready to defend and outscore each night. They have the makeup to do that, but nothing is ever set in this conference.

My overall opinion is very positive, but you must play devil’s advocate in the preseason. With that being said, I’m a fan of the Red Storm in terms of a team that can make a run late in March.