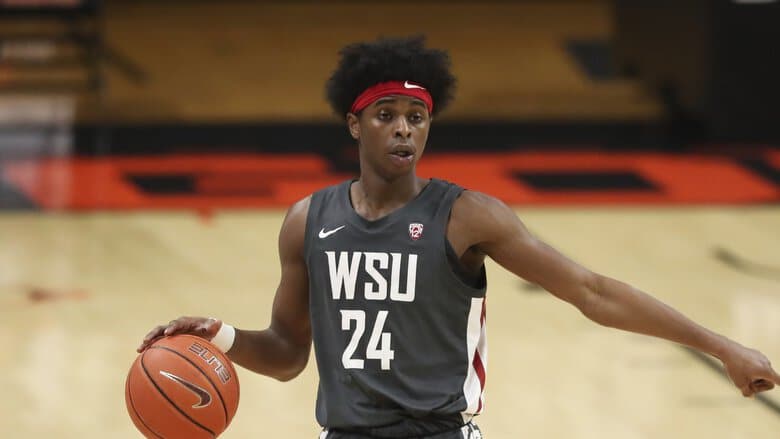 A 14-13 record might seem subpar, but Washington State basketball was a fairly young team last season. This year, they look to build on that with seven key returning players and one major transfer.

The first Cougar to score 40 points in a game since Klay Thompson, Noah Williams looks to be a Pac-12 first-teamer this season. Besides being one of the best scorers in the Pac-12, Williams is a superb defender, leading the Conference of Champions in steals last season.

This season you should expect Williams to put up some even crazier numbers and thrive as one of the best guards in the country. You might not think of Washington State basketball as a program with a heavy history, but sometimes all certain players just break through and change that mold. Williams has a chance to do that for the Cougars because if they reach the NCAA Tournament, he’ll be virtually the sole reason why.

There are a few rising sophomores and juniors on this team, but Jakimovski has the highest upside. He’s showed glimpses of a solid rebounding big who can score inside and out. This year it’s time to see what he can do with a bigger role as Aljaz Kunc opens up more playing time in the frontcourt.

I like Jakimovski to be someone who benefits from added minutes. He almost left the program in July, but ultimately decided to return, which is a good sign. He played about 25 minutes per game last season, but even with an added five MPG, Jakimovski could entertain double-digits in scoring. If Jakimovski improves his percentage from three it opens up the floor even more for a Cougars team that has the capability to score.

There are a few other players outside of the six bench players listed, namely Tony Miller, that could also vie for playing time. I went with these guys as the most attractive options based on playing time in past seasons.

Like Jakimovski, Dishon Jackson could be ready for a big and improved year. He’s arguably just as worthy to be the starting center as Abogidi, and I wouldn’t be surprised if they play interchangeably in the starting lineup throughout the season.

TJ Bamba is the only really solid guard off the bench, but the backcourt of Flowers and Williams won’t need to come out of the game all that often regardless.

Gueye and Rosario should both receive enough minutes to keep them happy, and it’s looking like Washington State basketball will rely on its forwards and centers, especially off the bench. Gueye is a big wild card given his freshman status, but a 4-star prospect is always someone to keep in mind.

We’ve talked a whole lot about offense, but how about the defensive numbers for Washington State. Last year the Cougars were 24th in adjusted defense. Michael Flowers is a gifted defender himself, so even though his offense may be the ticket seller, his defense is a key for the Cougars. Last season, every team (with the exception of Memphis and Saint Mary’s) above Washington State in adjusted defense made it to the NCAA Tournament. This year they’ll have to capitalize on the defensive end.

The Cougars are improving at the wrong time. Three years ago the Pac-12 was in disarray and this roster would’ve been good enough for a top-four spot. Now, with the likes of Oregon, UCLA, USC, and others turning it around, it’ll be a tougher conference to compete in.

I can see Washington State finishing anywhere from 5th to 10th in the conference, and that’s mostly because they didn’t exactly show anything too convincing last season. The Cougars were just 7-12 in the Pac-12.

Michael Flowers may be a bit overlooked with how good Noah Williams is, and that’s a crime. There’s a reason he’s included in the main tag for the Washington State basketball overall outlook. If you’re a fan of numbers, I’ll give you this one: 8. That’s how many 30-point outbursts he’s had in his career.

Overall, this can be a tournament team, but it’ll all be about getting over the hump and proving that Washington State can be a good basketball team. A pretty weak non-conference slate won’t help out much unless they can run the table.

Featured image from The Seattle Times