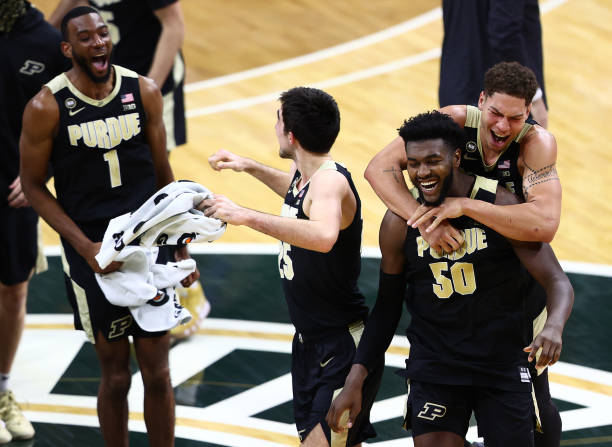 Gonzaga, Kansas and UCLA are receiving a lot of love, but with parity ever-increasing in college basketball, keep an eye on these squads.

Over the past few seasons, the parity in college basketball has been on the rise, particularly with multiple changes in the AP Poll happening each week. This sets up for a long list of potential contenders to cut down the nets at the highest stage in college basketball.

This season, Gonzaga, Kansas and UCLA are three teams on almost everyone’s Final Four list. They pass the eye test, have superstars, and holding blue-blood credentials doesn’t hurt. However, there are some not-so-everyday teams built for extra-long runs in March that could end with a crowning jewel in early April.

It starts with senior Will Richardson, who will have tremendous help in the backcourt with De’Vion Harmon coming over from Oklahoma and Jacob Young from Rutgers.

Syracuse transfer Quincy Guerrier could be a star in the Pac-12 after he was one of the most improved players in the ACC last season. Guerrier will share frontcourt duties with Eric Williams Jr. and big N’Faly Dante. Three other 6-foot-11 centers will vie for time on an already stacked Ducks roster.

Chris Duarte’s departure may make some slightly hesitant. Duarte was a lottery pick and creates a big hole to replace. However, this team has the making of one that can rattle off wins in bunches. All five starters can average 10 points or more and explode for a 20 point outing on any given night.

The main question for Oregon will be the go-to player. Duarte leaving means Richardson could take over that role. However, Guerrier, Harmon and Young are all capable of being the top guy. It could be a shared role, but I’m not particularly a fan of that. To play devil’s advocate, Baylor proved me wrong last season with the three-headed monster of Jared Butler, MaCio Teague and Davion Mitchell. Oregon can be last season’s Baylor with the extraordinary talent in that starting five.

I guess the Tigers aren’t be a secret anymore, but any time a non-power six conference team is a contender to win the National Championship, they’ve got to be included as a sleeper. Like it or not, it’s not traditional and the Tigers haven’t been overly relevant for a good handful of years.

The first big domino to fall for Penny Hardaway was the commitment of big man Jalen Duren. The five-star product agreed to join Memphis basketball on August 6, officially thrusting Memphis into a more exclusive squad of teams.

Just 19 days later, Emoni Bates followed in choosing the Tigers over Kentucky, Michigan State and others.

The 6-foot-9 uber-talented Bates will run point guard for Memphis, setting up one of the scariest freshmen duos in the entirety of college basketball. Surrounding the likely one-and-done five-stars include impact forwards Landers Nolley II and Chandler Lawson, and transfer and former talented prospect Earl Timberlake.

The biggest challenge for Hardaway will be getting all this talent to work together. If that even happens to the slightest degree, Memphis will be a scary team this season.

I am wildly in love with what Purdue basketball has to offer this season. It may just be Matt Painter’s best roster he’s ever assembled in what will be his 17th season in West Lafayette, Indiana.

6-foot-10 senior Trevion Williams and 7-foot-4 rising sophomore Zach Edey are the best frontcourt in the entire country. That’s hardly up for debate.

The backcourt is filled with experience and talent. Sasha Stefanovic is a three-point barrage waiting to happen and the hype around Jaden Ivy has been ridiculous.

Purdue (+4.5 on @BetMGM) takes down No. 15 Ohio State in Columbus! pic.twitter.com/npWVVHHcYd

Brandon Newman is also returning, giving Purdue basketball perhaps the most experienced and talented team in the Big Ten.

While Painter didn’t utilize the transfer portal as most every other college basketball coach did, he does have the luxury of returning a veteran group of players who were already darn good last season. Consistency and gelling are two underrated yet vastly important characteristics of good basketball teams and Purdue has them both. Watch for the Boilermakers to be a 1-seed in March.