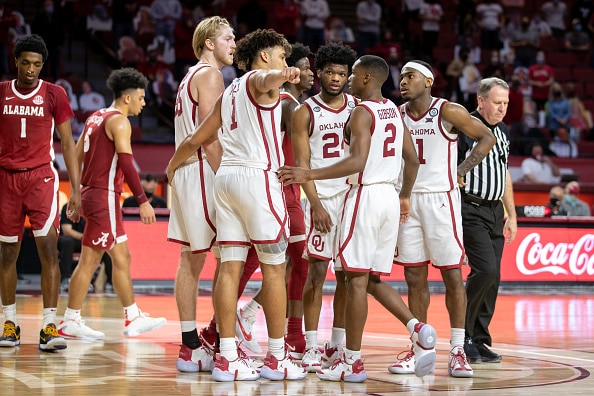 The new era of Porter Moser begins for Oklahoma basketball.

If you are looking for a team that returned its top guys and coach from last year, don’t look at this Oklahoma team, who lost its three top scorers and head coach. What you are looking at is a team who brought in an extremely underrated coach in Porter Moser, and some great transfers to go with a few of their already solid role players. In what may be the best conference, the Big 12, Oklahoma basketball will be a must-watch night in and night out.

Oklahoma basketball doesn’t have a clear-cut MVP at the moment, with Austin Reaves, Brady Manek, and De’vion Harmon all leaving while being in the top 3 last year. This year, Tanner Groves or Umoja Gibson are probably the favorites, but Groves should be the guy. After winning the Big Sky player of the year last year, Groves showed his ability to do just about everything on the offensive side.

For people doubting he can translate what he was able to do last year on a lower stage to one of the best conferences in college basketball, look at his performance against Kansas in the tournament last year. He scored 35 points and was the best player on the court that game, and he will get to face that Jayhawk team twice this year. As the go-to guy once again Groves should shine and could carry this team to some weeks on the Top 25.

Jordan Goldwire was the Duke superfan’s favorite player. While he was very limited on offense, he was a menace on defense, being a big reason why Duke was able to stay in games and shut down opponents’ top players. If he can continue to play defense at this level and become even just a little bit more of an offensive threat, it would go a long way for this Oklahoma basketball team. That is a lot to ask though, as he just posted his career-high in points per game last season at only 5.8. If he can boost that to 8 points per game, Oklahoma fans will be happy.

The Oklahoma bench has massive boom or bust potential. They feature what is projected to be a ton of talented guys from mid-major schools who are hoping to have big roles off the bench. Marvin Johnson averaged 15 points per game last year for Eastern Illinois, and while he is not expected to do so again, he is expected to be a spark plug off the bench. Joining him is Jacob Groves, the brother of Tanner who took a step last year and could do so again. Keep an eye out for CJ Noland, a four-star recruit who if given enough playing time can develop into a really solid player by March.

Last year, Loyola Chicago ranked 2nd in KenPom defensive efficiency rating under Porter Moser. Now, he obviously has a completely different team but this shows how great of a defensive coach he is. The Big 12 is loaded with teams that feature excellent scorers, and Porter Moser will know how to combat that and force them to make the difficult shots if they want to win games.

This team will be very interesting considering so many people left and joined the team, so don’t be surprised if they lose a few games they’re supposed to in the beginning as they build chemistry. Defensively, this team should be great, with a defensive-minded coach in Moser and two great defenders in the starting lineup in Goldwire and Harkless. Gibson is a great three-point shooter, but he will need to be able to add more to his game, especially because he might need to be the guy to make a big shot with Austin Reaves gone.

The biggest question for this team is how they can stack up in the Big 12. This league has the potential to send 8 teams, and three of those, Kansas, Texas, and Baylor, are easily title contenders. Oklahoma basketball will have to kick it into another gear this season and show the Big 12 for one of the last times that they can compete.

Projected Finish: 7th in the Big 12