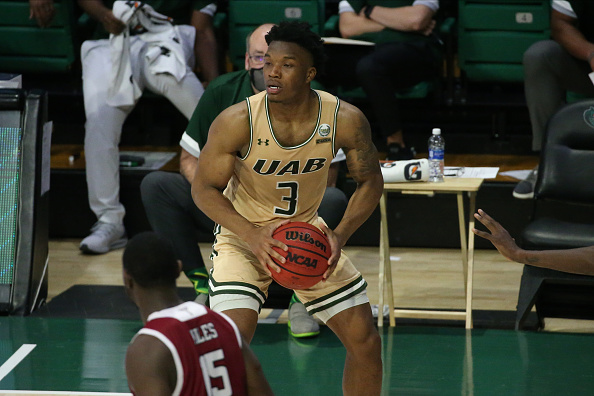 UAB basketball returns most of their key players as they look to move to the top of Conference USA in 2021-22.

UAB basketball quietly went 22-7 (13-5) last season, finishing third in a strong C-USA race. They are led by Andy Kennedy, who returned to coaching after a few seasons away from the game. Kennedy has hit the transfer market hard in just two years. Last season’s leading scorer Michael Ertel is included in that group. This off-season was no different, meaning the Blazers are set to not only compete in 2021-22, but beyond.

Even though Michael Ertel was the leading scorer last season, it was Lovan who seemed to be the catalyst for UAB basketball. He did a little bit of everything, averaging a little over 12 points per game and four rebounds per game. Furthermore, he was the team’s leading assist man and tied for second in steals. Lovan’s game is all about getting to the rack as he got to the free-throw line more than anyone else on the team. His ability to work the floor opens up opportunities for others, and that will be a big key once more in 2021-22.

UAB basketball is blessed with a plethora of players that can dominate in the backcourt. However, the frontcourt is where things get a little thinner. Trey Jemison will be expected to up his game even more than he did last year. He was solid, especially on the defensive end, ranking third in C-USA in blocks per game and making the all-defensive team. It was his first year after transferring over from Clemson, and in year two there should be an expectation of further improvement. If Jemison can bump his numbers up even more, that makes the Blazers all the more dangerous from all areas of the court.

The Blazers have a veteran group comprising their bench heading into the season. Jordan Walker comes over from Tulane, where his 13 points per game last season was second on the team. Justin Brown will be in the rotation between the 2 and the 3 on the floor after coming from South Florida. Then, you have Jamal Johnson who averaged a solid 9.4 points in the SEC for Auburn last year. All of those additions speak to the loaded backcourt in Birmingham. Rongie Gordon will be expected to give Trey Jemison some breathers as he continues to develop his game at the college level. Guard play wins in college, and UAB basketball has plenty of it.

Turnovers (and lack of them) are the name of the game for this group. Defensively, the Blazers ranked 14th in the nation last season, forcing a turnover on 22.8 percent of opponent’s possessions. Furthermore, they forced steals on 11.5 percent of opponent’s possessions, ranking 21st in the country. On the flip side, this is a group that also takes care of the ball, only turning it over 15.6 percent of their own possessions. A team that can force you to make mistakes while limiting their own is going to win more nights than not, and that’s exactly what you find in Birmingham.

Quite frankly, UAB’s schedule is the biggest thing that did them in last season, which seems a little unfair to say given the pandemic. However, the readjustments made in both non-conference and conference scheduling didn’t give the Blazers many opportunities to prove themselves. That won’t be the case this season. UAB basketball has some giant killer opportunities on the non-league schedule and will get the chance to play everyone in C-USA at least once like usual.

There is a returning core here that, if they take another step forward, could have the Blazers pushing for a spot in the AP Poll by the end of non-league play. Add in the depth at the guard position, and all of a sudden this is a team that feels like it could find a way to win a lot of games. Conference USA is one of the better mid-major leagues out there, but a mid-major nonetheless, which will dull the Blazers’ accomplishments in the eyes of some.

I’m here to tell you not to do that though. The balanced scoring and added talent mean C-USA is UAB’s for the taking. Furthermore, they are a team that should make any opponent wary in the NCAA Tournament. Andy Kennedy has coached in the SEC and knows what it takes to win at a high level. He’s brought that mindset to the Blazers, and he’s ready to try and reap the rewards in 2021-22.