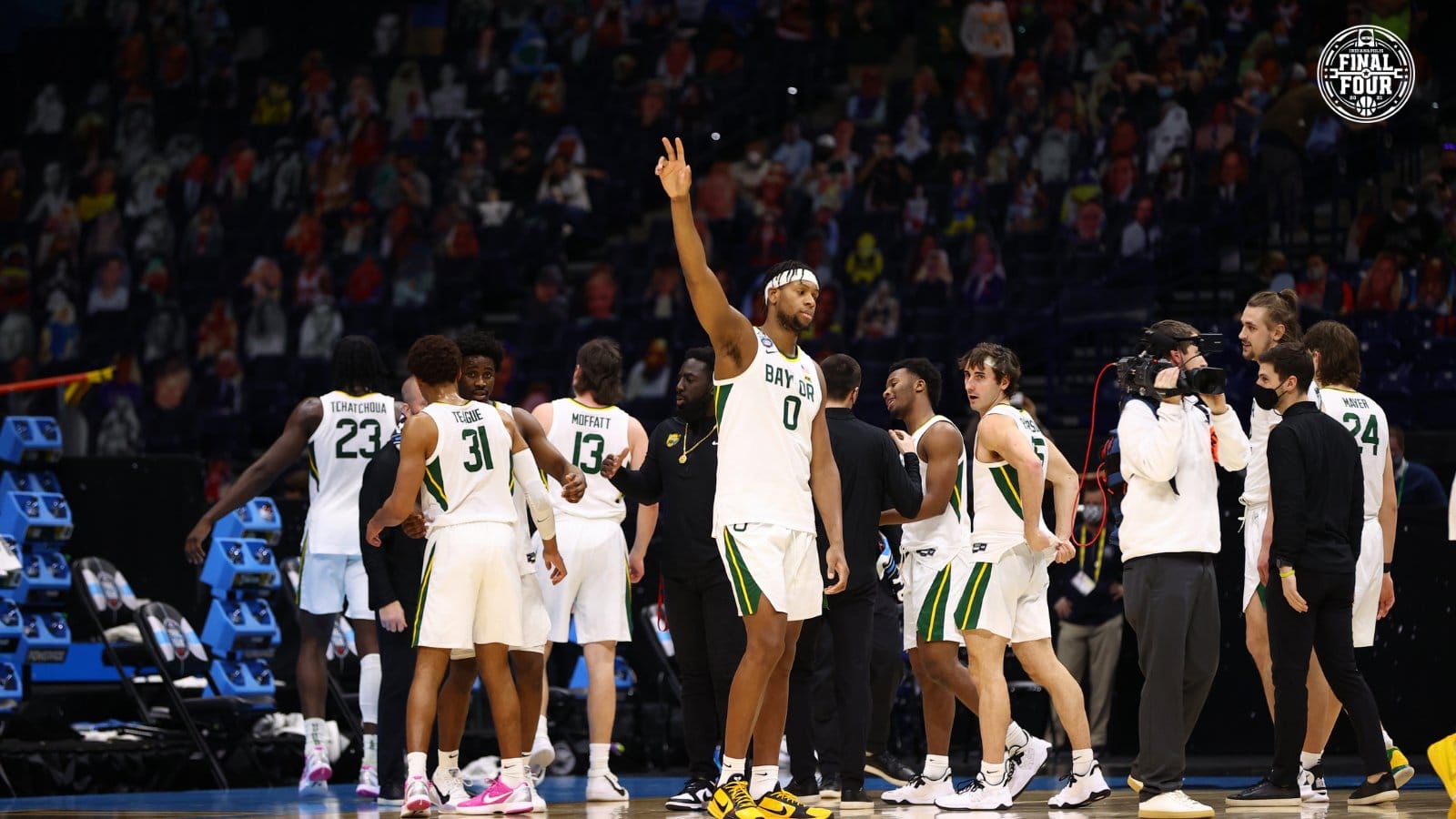 After a great first half from Baylor basketball, the team went after the Houston Cougars beating them at their own game. The Bears went into the half up by 25, 45-20. The inability of the Cougars to score in any facet was brutal.

Houston basketball couldn’t find the open shot and, when they did, didn’t play their game. Baylor, on the other hand, did every aspect on point. The Bears outrebounded the Cougars on both ends of the floor until the closing minutes. The most impressive thing for Houston basketball was the limited fouls the team gave up in the entire game.

Absolutely incredible performance from Scott Drew’s Bears. They shot 52.7% from the field, 45.8% from 3. They’ll now play in the national title game for the first time since Bill Henderson was coaching in 1948.#BillHenderson#TerryTeagle#Huck

Baylor basketball was able to advance with a nice overall game. The Bears defeated the Houston Cougars by a score of 78-59 to move on to the NCAA Tournament Championship game.

Houston basketball struggled outside of Marcus Sasser. Sasser put up 17 points in the first half and finished the game with 20 points, four rebounds, and two assists. Quentin Grimes showed up in the second half to reach double-digit scoring with 13 points, two rebounds, two assists, two steals, and one block.

Davion Mitchell is the first player since 1987 with double-digit assist & no turnovers in a men's Final Four game.

His 11 assists are the most in a men's #FinalFour game since in 2003 @BaylorMBB pic.twitter.com/naVswlKhLY

For Baylor basketball to have success, the team needed to share the ball. The Bears dominated this area. The Bears found open shooters, found the players cutting to the basket, cut to the hoop, and kicked out for open 3-point looks. All of these things allowed for Baylor basketball to dominate Houston. All of Houston’s wins were against teams that did not have good ball movement.

The way Baylor basketball moved it today, this team will be scary for any matchup they find in the Championship game. Coach Scott Drew has this team back to where it was before its Covid pause, and both opposing teams should be afraid. The ball movement and unselfishness of this team, along with the weapons and defense, will be a struggle for either UCLA or Gonzaga.

An area that Houston basketball has excelled at all season was outrebounding opponents and getting second-chance points. Baylor basketball and Coach Drew knew this and focused on it. The Bears held the Cougars to limited second chance looks, allowing Houston to have five offensive rebounds. On top of that, the Bears took care of the ball. Houston basketball struggled shooting, which took the air out of the ball for them on the other end of the floor. The Cougars were being boxed out, leaving players and allowing open looks. These struggles ended Houston basketball’s run in the NCAA Tournament.

For Baylor basketball, this part came extremely easily. The Bears found open shots from all over the floor, and it helped that everyone saw the ball go through the basket. Baylor basketball shot an incredible 52.7% from the field, 45.8% from 3-point, and had the same number of shots taken as the Houston Cougars. Houston basketball does not have a team that has players shoot efficiently to win games. The second-chance points are a huge part of their game, and not getting those close looks or second-chance open threes really hurt the team in this matchup. Baylor basketball did everything it needed to and will need to play this same way on Monday if the team wants to win the NCAA Tournament.

One thought on “Baylor Basketball plays Flawless into Championship Game”