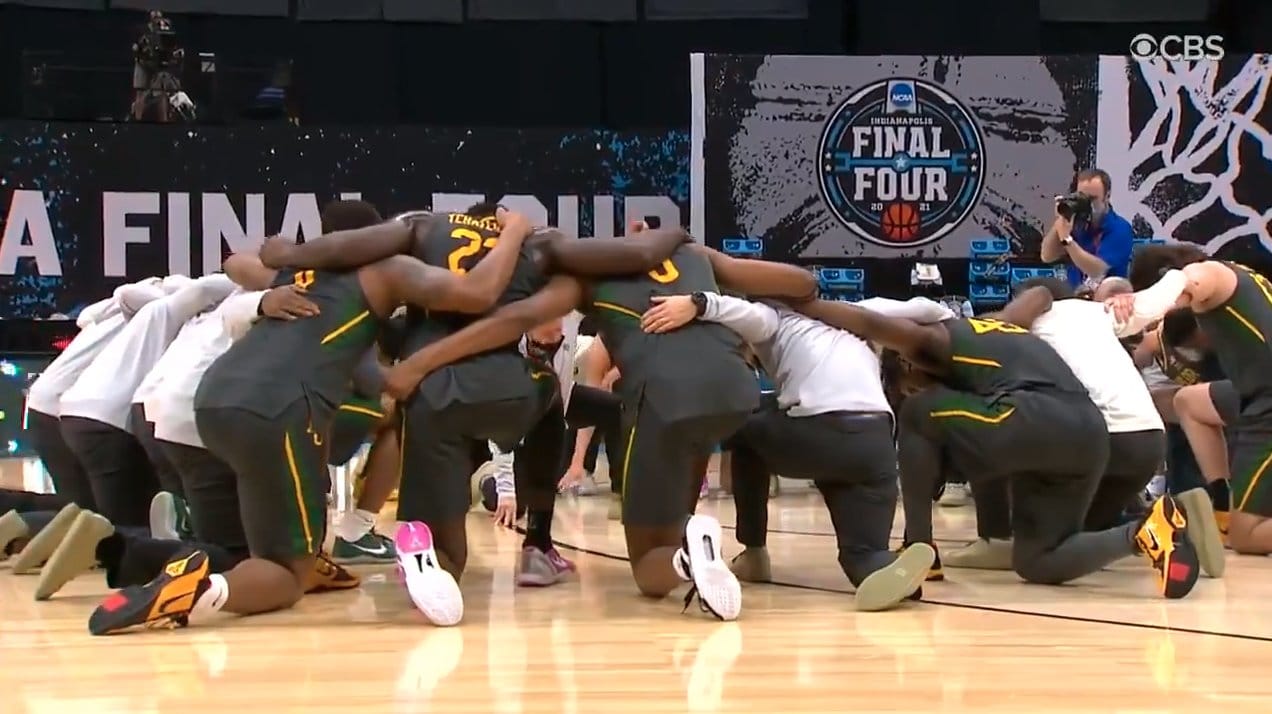 Gonzaga basketball had battled back from as much as a 19 point lead from Baylor basketball at the half. Baylor basketball was attacking the boards at the start of the game, getting three-possession after two offensive rebounds to put points on the board. The Bears went on to score nine unanswered points. This set a standard for Baylor basketball, and Coach Scott Drew showed his preparation.

Baylor dominates Gonzaga in the first half 47-37‼️ pic.twitter.com/QMmJC2Miel

Macio Teague had an impressive first half putting up 14 points and one block. He had help from Jared Butler, who added 10 points, two rebounds, and four assists for Baylor basketball. Gonzaga basketball was led by Drew Timme, who put up 10 points, two rebounds, one assist, and one block. Baylor basketball was shooting out of its mind in the first half, making 50% from the field and 58.3% from 3-point land. Meanwhile, Gonzaga basketball struggled from the 3-point range with 16.7% but had 54.5% from the field.

Scott Drew has led Baylor from purgatory to ecstasy. The Bears left no doubt. As good of a national title game performance as we've EVER seen. DOMINANT.

Baylor Basketball is the NCAA Tournament Champions, and hear one shining moment. This team won by a score of 86-70 over the Gonzaga Bulldogs. The Bears were led by Jared Butler, who put up 22 points, three rebounds, and seven assists. Baylor basketball had other major contributors in Macio Teague, who put up 19 points, two rebounds, and one block. Another contributor was Davion Mitchell with 15 points, six rebounds, five assists, one steal, and one block.

Macio Teague having himself a game 🔥

The senior guard finished the first half with 14 points on 6-10 FG @_MrDoWork pic.twitter.com/MKuhbFd7Le

An area that Baylor basketball that showed prowess was in its rebounding as a top 10 offensive rebounding team this year. The display they put on to add second and third chances at scoring allowed the team to separate offensively. The Bears outrebounded Gonzaga basketball by 16 with 38 to 22. The intensity that Mark Vital had on the offensive glass and really just on the boards.

This was something that Baylor basketball stepped up against the Houston Cougars had done well. The Bears and Coach Drew knew how important it would be in this final game. Ending the Bulldog’s undefeated season was a surprise to everyone. The impressive stats that Gonzaga basketball had put up all year offensively was just not enough in this game.

One area that really stood out was the length and talent of Baylor basketball. All the players were able to have great footwork, keep players in front of them, and disrupt passing lanes. Baylor basketball did everything right on defense. While the team had moments, the game they put together was impressive. The Bears had five blocks, eight steals and caused Gonzaga to turn the ball over 14 times. All of these extra opportunities were a huge part of the winning recipe for the Bears.

Baylor getting it done at BOTH ends 💥 #NationalChampionship @BaylorMBB pic.twitter.com/nWqhfCALZS

This was the other area that Baylor basketball had excelled at all year. The Bears led the nation in a 3-point field goal percentage with 41.2% from beyond the arc. That came in waves tonight as Gonzaga struggled to shot from 3-point land, only making 29.4% compared to Baylor basketball’s 43.5%. The high scorers for Baylor basketball were also the only players to hit 3-pointers. Flagler was the most efficient hitting 3-of-4 3-pointers, while Butler hit 4-of-9 3-pointers. What will likely go overlooked is the fact that the Bears sealed it by making 16-of-18 free throws. Meanwhile, Gonzaga struggled and made 15-of-21 from the charity stripe.

Baylor has its foot on the gas 💥#NationalChampionship @BaylorMBB pic.twitter.com/qLVI3pRTiE

Congratulations to Baylor basketball for overcoming Covid and winning the NCAA tournament. I would also like to congratulate the Gonzaga Bulldogs on an awe-inspiring season. Unfortunately, the Baylor Bears put together a great game, and Gonzaga needed to play near perfect to win this game.

Gonzaga was national title or bust. Bulldogs now join Indiana State (1979), UNLV (1991), and Kentucky (2015) as great teams who advanced deep into the NCAA Tournament undefeated, but didn't finish the job.