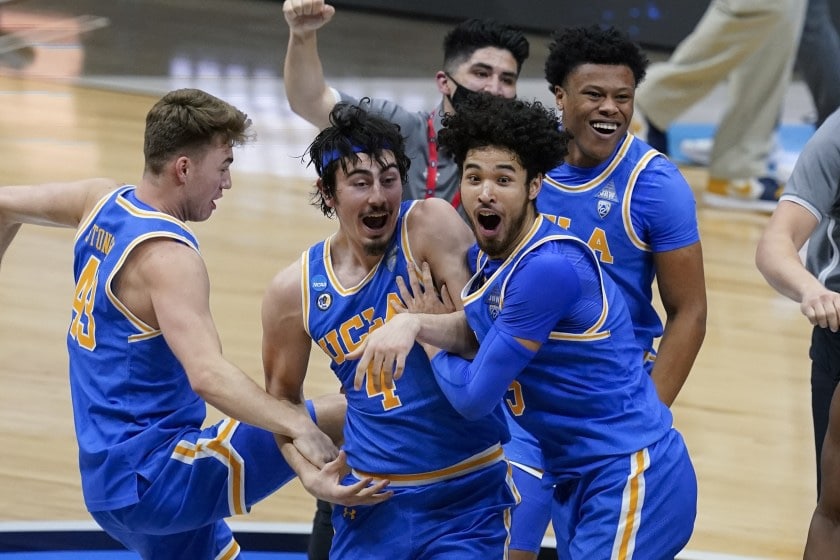 Lucas Oil Stadium – In a very crazy college basketball season that has been turned on it’s head, there was another spectacle last night. The 11th seeded UCLA Bruins out of the PAC-12 defeated the #1 seeded Michigan Wolverines out of the Big Ten 51-49. UCLA Basketball became just the second school to go from the First Four to the Final Four (the VCU Rams being the first in 2011). Now the Bruins magical run will take them to a very highly anticipated matchup with the Gonzaga Bulldogs in a Fonal Four that is going to be a West Coast vs. the state of Texas affair. In a game that was very low scoring, UCLA Basketball fell behind 11-4 to Michigan with just over nine minutes left in the first half and then battled back and finally took its first lead of the game 18-17 off two Jaime Jaquez free throws with just under four minutes left before halftime. A few more big buckets by Brandon Johns and Jamie Jaquez coupled by some timely baskets by Johnny Juzang and UCLA Basketball held a 27-23 lead going into halftime. In the second half, the Wolverines were held in check by UCLA and, with the exception of a few baskets by Hunter Dickinson, might have never had a chance to regain the lead again in the second half as they did with just over seven minutes left in the game. UCLA Basketball kept its poise and again surged out to a small lead never to look back again. Michigan tried valiantly to pull out the win but just the double digit scoring of Hunter Dickinson (11 points) would not be enough as both teams shot terrible from the field and the 3 point line. In fact, the Wolverines shot a better percentage from the field (39% to 38%) and from the 3 point line (27% to 23%) than did the Bruins. It was the play of Johnny Juzang who led UCLA Basketball to the huge upset as he shot 11-19 from the field and led all scorers with 28 points on the night.

1. Mick Cronin Used His Bench For The Win

The box scores might say a great deal to many people but to basketball fans it speaks volumes. UCLA Basketball’s bench might have been outscored by Michigan 15-0 but Cronin played way more people than Wolverine’s coach Juwan Howard did. Cronin played a total of 10 players to Howard’s 7 and while his extra five may not have scored, they definitely literally played a huge role for the Bruins. UCLA Basketball needed every last bit of energy to get by a team most had suspected of being the ones to be able to topple Gonzaga from the ranks of #1. Now we will see if the same strategy can be applied to the Bulldogs by the Bruins.

This statement is true in all phases of the game… especially in terms of their lineup on the floor. UCLA Basketball had only one…. count it one.. player who is under 6’6. That player is 5’11 sophomore guard Tyger Campbell who must feels he plays in the midst of one California’s redwood forests in practice. The height advantage will be a big factor when the Bruins play Gonzaga as the Bulldogs only have one player under 6’4…. senior guard Aaron Cook. Tue Bulldogs played every person in their game the other night against the Trojans and have looked unbeatable by most critics. Guess we will see what holds in store for Saturday.

Now you may ask why this takeaway is important. Well actually it isn’t this time of year and UCLA is the reason why. A team that was defeated twice by the Trojans of USC and knocked out of the quarterfinals by an Oregon State team that has also made a run says a lot actually. Maybe UCLA, USC and Oregon State didn’t start peaking until late in the year which is entirely possible considering the late start and Covid protocols everyone endured. Well, UCLA Basketball will have to throw the history of this season out the window and play for its life on Saturday night as they face a Gonzaga team who ran over the Trojans by nearly twenty points. The Trojans being a team who defeated the Nruins twice this year. Will Johnny Juzang, the transfer from Kentucky, and Brandon Johns and company be able to contain the beautiful rhythmic basketball played by Mark Few’s Bulldogs? The Bulldogs are poetry in motion. A throwback to the Celtics teams of the 1980s with their acumen passing the ball offensively. It will be a very interesting matchup to say the least especially with everyone predicting a Gonzaga – Baylor matchup on Monday night. Stranger things have happened though. And remember, it is March….. for a few more days anyway.