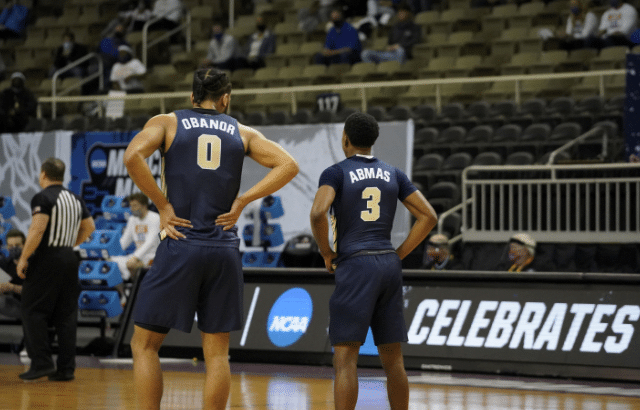 CBB Review has you covered in trying to figure out who to root for heading into the Sweet Sixteen.

The Sweet Sixteen tips off this Saturday, and there’s a high-percentage chance that your favorite team is no longer dancing. That is definitely the case with most of the folks here at CBB Review. Therefore, it’s time for you to decide which team you would like to jump on the bandwagon with. We’ve got you covered, giving you a rundown on each of the remaining teams in terms of their excitement to root for.

You might be wondering why a team that’s been a surprise in the 2021 NCAA Tournament is the least favorable to root for. Well, while the Bruins are a nice story this season, they also have the most titles in NCAA history thanks to their historic run in the 1960s and 1970s. UCLA’s run has continued a trend of teams playing the First Four to reach the second weekend. Mick Cronin’s group is fun to watch, but rooting for one of the best school’s in NCAA history still feels wrong.

Villanova has become a Big East juggernaut under Jay Wright. The overreaction to the absence of Collin Gillespie was strong, and the Wildcats avoided the upset everyone thought they would suffer. Villanova is the most recent national champion left in the field, winning on the memorable buzzer-beater back in 2018. It would be impressive for this shorthanded group to win a title, but rooting for them feels ho-hum given their recent success.

Hear that? It’s the sound of Michigan carrying the weight of the Big Ten after its disappointing NCAA Tournament performance thus far. Only the Wolverines remain of the nine teams that made this year’s field. Juwan Howard has done a tremendous job continuing the success the program had with John Beilein. In the past decade alone, this program has made two NCAA title game appearances, one Elite Eight, and two Sweet 16s. This group is different, but the overall success makes them a tough group to pull for.

At the moment, Oregon will be best remembered in for their appearance in this year’s NCAA Tournament for being the first (and hopefully only) team to advance to the next round via a no contest due to COVID. That can change though if they can take home their second national title in program history. Dana Altman has the Ducks swimming in success during his time there, including a Final Four appearance back in 2017.

The man behind “Dunk City” has USC back into the Sweet 16 for the first time since 2007. Andy Enfield leads a group that includes arguably the best remaining freshman in the field in Evan Mobley. Oh, and his brother Isaiah isn’t too shabby either. The Trojans do have two Final Four appearances in their past, but the most recent was in 1954, so good luck finding someone who remembers that group. USC is playing right into their dark horse role in the 2021 NCAA Tournament.

When will we learn to stop doubting Leonard Hamilton? He has the Seminoles making their third-straight Sweet Sixteen appearance, and they are the ACC’s best remaining bet for a national champion this season. Florida State is looking for just its second Final Four appearance ever, with the first coming in 1972. It feels like this program has hit a wall every time they’ve made the second weekend recently. Perhaps you could hop on this bandwagon and help them get over the hump.

Arkansas had been a big surprise in the SEC this season behind second-year head man Eric Musselman. He has Razorback fans thinking about their first national title since 1994, which is the last time this program was consistently in the national spotlight. If you like teams that run, this group is for you. Fast offense is the name of the game for Arkansas. The Muss Bus is rolling though, so make sure you hop on while you still can.

The success that Scott Drew has had at Baylor is nothing short of phenomenal. The program had been to four NCAA Tournaments before his arrival, while he has taken them to nine. It’s even more impressive when you consider where this program was overall when Drew took over. The Bears seem poised to bring home their first national title in school history, so make sure you get behind them before it’s too late.

Creighton is making their first Sweet 16 appearance in the modern era of the tournament. In any era, they’ve never been further than this round. Marcus Zegarowski is a star and was the Big East’s preseason Player of the Year despite not being named to the preseason first-team. That sums up the disrespect this program gets as a whole. The Bluejays are looking to shake free from the doubt, but jump on this bandwagon cautiously since their next game is against Gonzaga.

The Houston program has seen a resurgence under Kelvin Sampson, settling into the role of the AAC’s powerhouse. The Cougars have experienced their fair share of March Madness heartbreak, losing on a wild buzzer-beater in the second round in 2018 and a close game to Kentucky in the 2019 Sweet 16. That doesn’t even include Phi Slamma Jamma finishing as national runners-up twice and a loss in the Final Four. Perhaps this is the season that Houston finally breaks through.

Maybe you hate Alabama on the gridiron, but they are sure fun to watch on the hardwood. If seeing lots of three-pointers go through the hoop is your thing, this is the team for you. Alabama hit 16 of them in their blowout of Maryland on Monday. The Crimson Tide are looking for their first Elite Eight appearance since 2004, and their first Final Four in program history. If that’s not enough, their head coach, Nate Oats, was teaching high school math just a little over eight years ago. Talk about a success story.

Here we go. Jim Boeheim is doing it again. Think the Orange shouldn’t have made the tournament? Too bad. Syracuse’s prior two appearances as a double-digit seed should’ve prepared us for them to make a run like this, as they got to the Elite Eight and Final Four previously. Another reason to love this group is the father-son component. Buddy Boeheim is leading this group for his father, making them hard to root against.

It’s not often that the best team in the nation ranks highly on a list to root for. However, the Bulldogs are looking to be the first team to go undefeated and capture a national title since Indiana in 1976. Mark Few is a likeable guy and is most deserving of finally breaking through and getting an elusive national title. Rooting for Gonzaga to get it done seems like a great cause to get behind.

Oregon State was picked last in the preseason in the Pac 12, but they get the last laugh as one of the final 16 teams standing this season. The Beavers are hot and most recently built a dam around likely Freshman of the Year Cade Cunningham in the second round. This is just the program’s second NCAA appearance in the last 30 years, and they are looking for their first Elite Eight in almost 40 years. The Pac 12’s ascension in this tournament has been unlikely, and Oregon State’s has been the unlikeliest.

How can you root against Sister Jean? The now 101-year old team chaplain is back in the spotlight as she tries to will on the Ramblers to another Final Four appearance. Loyola plays the best defense of anyone in the field and they put that on display in their upset of Illinois in the second round. The only thing rarer than a 15 seed in the Elite Eight is having a mid-major program make Final Four appearances so close together. Loyola has a shot, and it would rival Butler’s back-to-back national title game appearances in 2010 and 2011.

This is the obvious bandwagon to hop onto. Oral Roberts is this year’s Cinderella, and they have a one-two punch in Max Abmas and Kevin Obanor. The Golden Eagles only finished in fourth in the Summit League, but are playing like a team that finished fourth in the Big Ten. They are looking to make history as the first 15 seed to make it to the Elite Eight. The only other Sweet 16 data point here is Florida Gulf Coast getting this far and losing by 12 to Florida back in 2013. It’s fair to say that a majority of the country that doesn’t have a team left in the fight will be on this bandwagon.