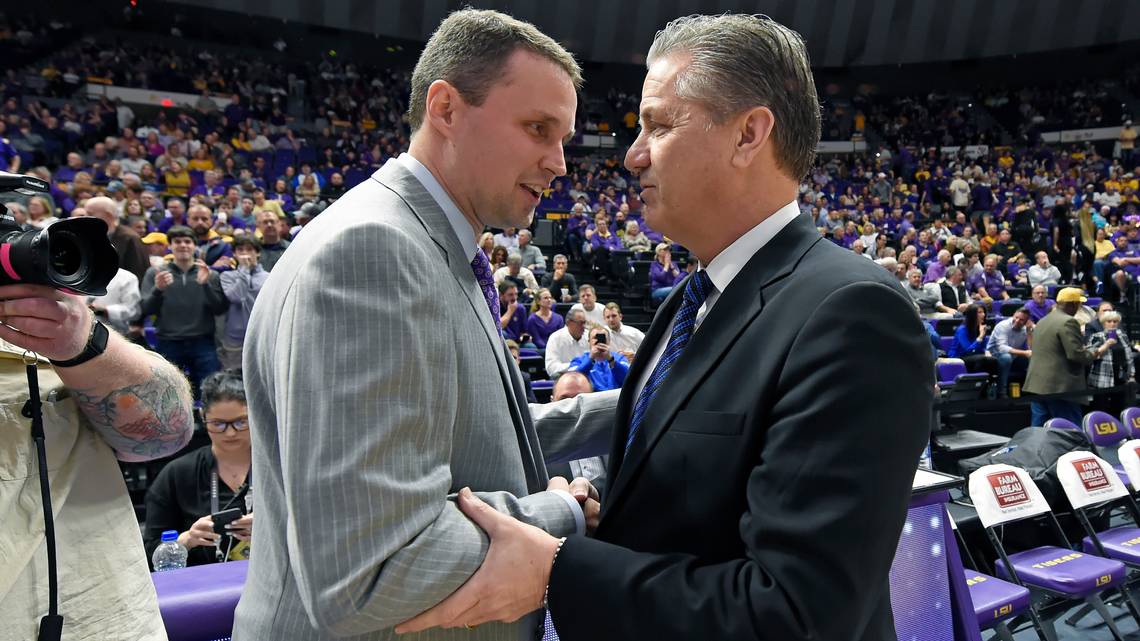 Ranking the SEC coaches is no easy task. In the last ten seasons, the SEC has seen a team in the Final Four six times with three different SEC teams making the Final Four with Kentucky winning it all in 2012.

The SEC coaches easily stack up against the rest of the major conferences. Coming in with the third most collegiate head coaching experience, the SEC and its coaches are on the Rise. The SEC is comprised of two types of coaches. The SEC has coaches who have established themselves and have been successful in the Power Five, and coaches who have shown a tremendous amount of success at the mid-major level who are looking to continue that greatness in the SEC.

We at CBB Review have looked at the Big East, Big Ten, AAC, and Mid-Majors. In continuing our coaching series, it’s time to take a look at the SEC coaches ranked.

Calipari was named Naismith Coach of the Year in 1998, 2008, and 2015. Along with coach Krzyzewski, Calipari is the only other coach to win the award three times. Calipari was inducted into the Naismith Memorial Basketball Hall of Fame in 2015. He was the fourth fastest coach to reach 700 wins only trailing Rupp, Tarkanian, and Roy Williams. Calipari was the first Division I coach to lead three programs to five regular season championships and leads all active coaches with 26 consecutive 20-win seasons. Calipari has led his team to 20 NCAA tournaments, six Final Four’s, and a National Championship in 2012. He is one of two coaches to lead three programs to the Final Four (Rick Patino). He sits in 13th all-time in both career wins and winning percentage with 775 wins and a .781 winning percentage.

Pearl has led his team to the postseason in 20 of 25 seasons in both NCAA Division I and II. Pearl won the NCAA Division II championship at Southern Indiana in 1995 and has finished at least first or second in conference play in 17 of his 25 years as a collegiate head coach. At the Division I level Pearl has been to 10 NCAA tournaments in 16 years, leading Auburn to a Final Four in 2019. He won the conference Coach of the Year marks in the Horizon League from 2003-2005 and won the SEC Coach of the Year in 2006 and 2008. Pearl has set school win records at four different programs (29-Southern Indiana, 26-UW-Milwaukee, 31-Tennessee, 30-Auburn) and is one of 12 coaches to lead three different programs to the Sweet 16.

Of the SEC coaches, Howland has the second most Final Four appearances with three. Howland has been coaching for 24 years and been to 11 NCAA tournaments and won eight conference regular seasons. Howland was named Big Sky Coach of the Year in 1997, Big East COY in 2002, and Pac-10 COY in 2008. In 2002, Howland also earned Naismith Coach of the Year honors. He made three straight Final Fours with UCLA from 2006-2008 and is one of 15 coaches to lead four different schools to the NCAA tournament. He currently sits in 93rd all-time in career wins with 497 and 30th among active coaches. Howland is one of only three coaches to win 30 games in three consecutive seasons(Rupp, Calipari).

Musselman has turned professional coaching into great success at the collegiate level. He was the NBA D-League Coach of the Year in 2012 and spent seven seasons as a professional head coach where his team led the league in wins. In his first four years at the colligate level, his team posted the sixth-best winning percentage among coaches. Musselman won at least 24 games in his first four seasons and at least 20 in all five of his collegiate years as a head coach. Musselman has been to three NCAA tournaments and was named Mountain West Coach of the Year in 2018 leading Nevada to a school record, 29 wins, and a trip to the Sweet 16.

Davis ranks 39th in win totals among current active coaches. Heis one of 63 coaches who have led three different programs to the NCAA tournament. Davis has 22 years of coaching under his belt. In those 22 years, he has been to six NCAA tournaments, won eight regular season championships and four conference tournaments. He has received a total of seven conference Coach of the Year honors from the Big Sky, Sun Belt, Conference USA and SEC. Davis is the winningest coach in Middle Tennessee history as well as the winningest coach in Sun Belt history.

Crean has 20 years of head coaching experience spread out between three current power five programs. In 20 years, Crean has been to the postseason 13 times, the NCAA tournament nine times, and the Sweet 16 four times. He led Marquette to the Final Four in 2003 winning back-to-back Conference USA Coach of the Year awards in 2002 and 2003. Crean then guided Marquette through a successful transition to the Big East. He then took over at Indiana, where he led the Hoosiers to three Sweet 16’s and received Big Ten Coach of the Year honors in 2016.

White inherited a program that had been to the Final Four and three Elite Eights just a few years before he took over, so much of his success goes overlooked. While at the reigns of Louisiana Tech and Florida, White has led his teams to three NCAA tournaments in nine years and three regular season championships. White set a school record at Louisiana Tech in 2014 with 29 wins. He became the second fastest coach in Florida history to win 100 games, only four games slower than Billy Donovan. White has led Florida to the last three NCAA tournaments and is one of only ten schools that have won at least one game in each of the last three tournaments.

With 12 years of experience at two schools, Martin is one of the few coaches who only has head coaching experience at power five programs. Martin led Kansas State to four NCAA tournaments in five years after the program had missed the tournament 11 straight years before Martin took over. Martin guided Kansas State to the most wins in program history in 2010 with 29 wins and a trip to the Elite Eight. At South Carolina, Success has been harder to come by. Martin has reached only one NCAA tournament in his eight years at South Carolina. That year, however, in 2018, Martin led the Gamecocks to their first and only Final Four in program history after a 12-year hiatus from the NCAA tournament and set a school record for wins with 26.

Wade is one of the five coaches in the SEC who have less than ten years of collegiate head coaching experience. The lack of experience, however, hasn’t stopped Wade from being successful. In seven years as a head coach, Wade has been to three NCAA tournaments and won two regular season championships. He was named the Southern Conference Coach of the Year in 2014 at Chattanooga. At LSU, Wade became the first coach in school history to lead the Tigers to postseason play in their first two years of their tenure, guiding the Tigers to the NIT in 2018 and a trip to the Sweet 16 in 2019.

In only five short years, Oats has been to three NCAA tournaments and two trips to the round of 32. Oats finished fourth in the voting for the 2019 AP Coach of the Year. While at Buffalo, Oats led the Bulls to the programs first ever ranking in program history. Reaching as high as #14 in the AP poll, Oats and Buffalo became the highest ranked MAC team in 40 years. Oats also set a school and MAC record with 32 wins.

Martin is one of the few coaches who have led three different programs to the NCAA tournament. His time at Missouri has been shadowed by prominent injuries dragging down Martin to the bottom of the list. In 12 seasons as a head coach, Martin has been to three NCAA tournaments and was named Missouri Valley Coach of the Year in 2011. While struggling to win games, Martin has, however, produced NBA players. In the past six years, Martin has coached eight NBA draft selections trailing only Kentucky, Duke, North Carolina, and UCLA.

With only three years of head coaching experience and just one year at the collegiate level, Stackhouse has a lot of ground to cover to make some noise in the SEC. The promise, however, is there. In his two years as a head coach in the NBA G-League, Stackhouse won the G-League coach of the year and championship in 2017. Finishing runner-up the following year.