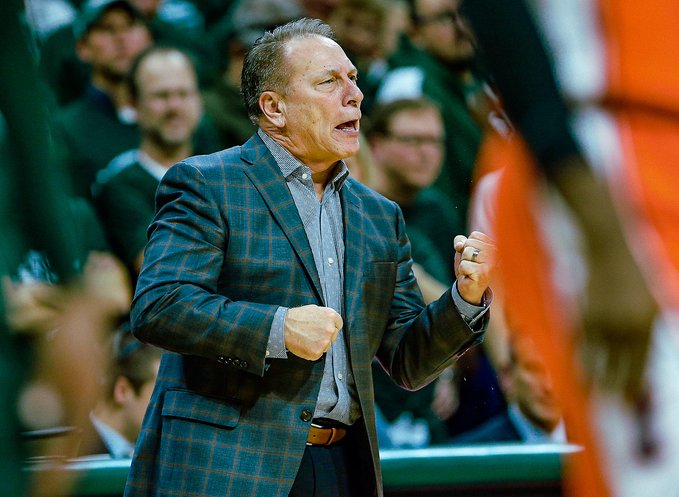 The Big Ten is considered one of the best conferences, if not the best year after year. The quality of players they sign season after season and the high level of play is impeccable. The coaches in the Big Ten often don’t get the credit they deserve.

While the coaches are spectacular the conference has yet to win a National Championship since Michigan State’s in 2000. Competitive programs are in the mix year after year and it’s all thanks to the coaches. Without getting carried away here are the Big Ten coaches ranked.

Be sure to check out our head coaching ranking series: Big East, AAC, and Mid-Major have previously been posted.

Izzo is the longest-tenured head coach in the conference and the only coach who has a National Championship. All 25 years of his head coaching experience have been at Michigan State, where he has led the Spartans to 22 NCAA tournaments and eight Final Fours. Izzo has been crowned Big Ten Regular Season Champions 10 times and taken the Big Ten tournament title on six occasions. He is one of only four active coaches with at least 15 years of experience, to never have a losing season. Izzo currently sits at 34th all-time in career wins and 43rd in career winning percentage.

Painter is a coach who is consistently underestimated. Painter has been a head coach for 16 seasons with all but one at Purdue. After leading Southern Illinois to the NCAA tournament in 2004, he moved to Purdue as an Associate Head Coach before taking over for the legendary Gene Keady. Painter quickly flipped Purdue back on to it’s winning ways and has been named Big Ten Coach of the Year four times in the process. In all, Painter has been to 12 NCAA tournaments while winning four regular season championships and winning the Big Ten tournament in 2009.

Turgeon has quietly been on the coaching scene for 22 years. Before taking the job at Maryland, Turgeon spent time at Jacksonville State, Wichita State, and Texas A&M, leading the Shockers and Aggies to the NCAA tournament. Turgeon has yet to find much success in the NCAA tournament as he has only gone 9-9. Turgeon has led Maryland to a #2 ranking in the AP Poll during the 2015-2016 season and was named Big Ten Coach of the Year in 2015. Turgeon as two total regular season championships and sits at 91st all-time in career wins with 454.

McCaffery makes the most of what he has. Iowa and McCaffery have never blown away the recruiting trail, yet Iowa has been a force to reckon with in the Big Ten. McCaffery coached Luka Garza, a 247 #118 recruit, to the 2020 Big Ten Player of the Year. That’s how McCaffery has achieved success by bringing in multi-year players and developing them. McCaffery has taken Lehigh, UNC Wilmington, Siena, and Iowa all to the NCAA tournament. In total, McCaffery has been to nine NCAA tournaments, won four regular season championships, and five conference tournaments. He sits at 97th in career wins in his 24 years as a head coach.

Holtmann makes magic happen. After three years as a head coach at Gardner-Webb, Holtmann made a move to Butler as an assistant before taking over the head coaching job shortly after. In all, Holtman has been a head coach for nine seasons making the NCAA tournament five times. He led Butler to three consecutive 20-win seasons and Sweet 16 before making a switch to Ohio State. At Oio State, Holtman returned the Buckeyes to the NCAA tournament after two consecutive absences and has achieved three straight 20-win seasons with the Buckeyes. Holtman has been named Coach of the Year in the Big South, Big East, and Big Ten.

Underwood made big noise his first four years as a head coach when he took Stephen F. Austin to three straight NCAA tournaments and followed that by taking Oklahoma State back to the Big Dance. Underwood has yet to reach the NCAA tournament in his three years with Illinois (would have made the 2020 tournament) but has seen improvement in his team every season. In his seven years, Underwood as three regular season and conference tournament championships and was named Southland Coach of the Year in all three of his seasons at Stephen F. Austin.

After a very successful run at Iowa State, Hoiberg took a chance in the NBA with the Bulls. Hoiberg’s success wasn’t what he or the team would have hoped for. Luckily for college basketball, Hoiberg has found his way back into the game at Nebraska. In his six seasons as a head coach, Hoiberg has made the NCAA tournament four times. He won the Big 12 conference tournament twice and was named Big 12 Coach of the Year in 2012.

Pikiell can easily be underestimated as a head coach. Pikiell has been a head coach for 15 years. His first 11 seasons were at the helm of Stony Brook, where, in his 11th season he led Stony Brook to their first and only NCAA tournament in school history. Now, Pikiell is in the midst of rebuilding a historic program and is inching closer to get Rutgers back to the NCAA tournament for the first time in 30 years. Last season, Pikiell led Rutgers to their first winning season in 15 seasons. Overall, Pikiell has been named Coach of the Year four times, won four regular season championships, and one conference tournament all at Stony Brook.

Gard’s entire head coaching career has been with Wisconsin. After he took over for Bo Ryan, Gard had to create his own variation of Wisconsin basketball and he has done just that. Gard has led the Badgers to three NCAA tournaments and has the unfortunate pleasure to be known as the coach who ended Wiscon’s 19-year streak of reaching the NCAA tournament. But, Gard rebounded and in 2020 was named Big Ten Coach of the Year.

In his first season as a head coach, Pitino helped Florida International to their first winning season in 13 years. That performance led Pitino to Minnesota where he has been for the last seven seasons. Pitino led Minnesota to three 20-win seasons and two NCAA tournament appearances. His biggest accolade is the Big Ten Coach of the Year in 2017.

Miller has spent most of his head coaching career at Dayton. In six seasons at Dayton, Miller reached four NCAA tournaments and win two regular season championships. Miller was named Coach of the Year in the Atlantic 10 in 2017 after he capped off his fourth consecutive 20-win season. In his third year at Indiana, Miller has finally reached the 20 win mark.

Howard fell to 13 on this list solely based on is lack of experience. Howard has coached one season at Michigan and one season overall. He finished 19-12 and would most likely have made the NCAA tournament. However, one season with players mostly based his predecessor’s team. Time will tell with Howard and Michigan, but more sample size is needed to make a true determination.

It pains me to place Collins last on this list. He certainly doesn’t deserve it. However, the other Big Ten coaches have done just a bit more. Collins has spent seven seasons as a head coach at Northwestern. Arguably one of the toughest coaching jobs in Division I, Collins has brought Northwestern from an afterthought to an upset threat Big Ten. He reached the NCAA tournament and won a first round game with the Wildcats in 2017, which remains the only NCAA tournament in school history. Collins is however the only current Big Ten coach with a sub .500 record.

One thought on “Ranking the Big Ten Head Coaches”