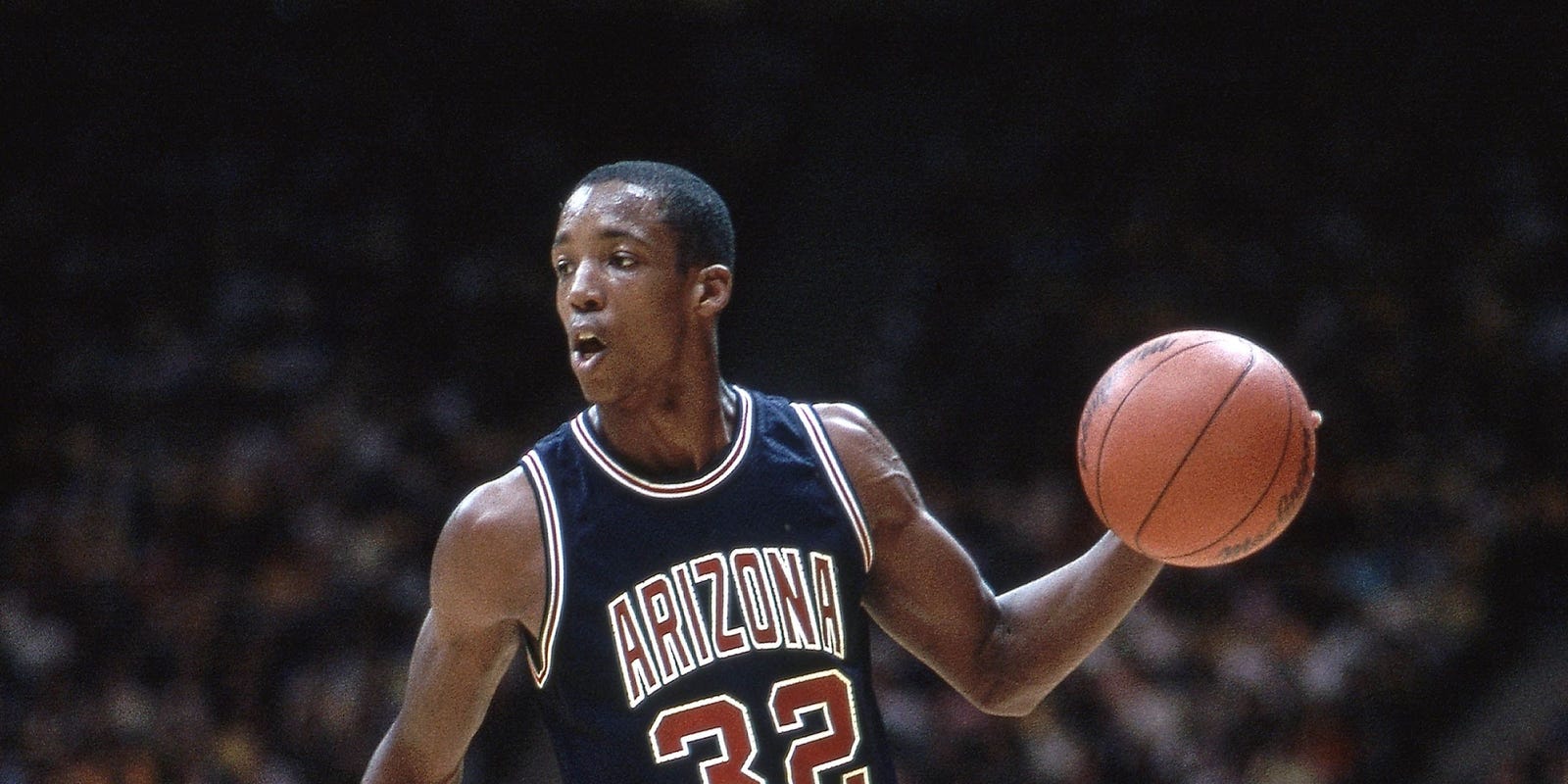 Over the next few weeks, I’ll be running an article series on all-time starting fives of all the teams in the Pac-12. First, let’s take a look at the Arizona Wildcats. It was especially hard to choose between some of the players, especially backcourt players. Between Damon Stoudamire, Salim Stoudamire, Jason Terry, Gilbert Arenas, Mike Bibby, and Miles Simon, it was hard to pick two out of that group of Arizona basketball stars.

At point guard, i went with Damon Stoudamire. Damon’s nickname was “Mighty Mouse.” As a junior, Stoudamire led Arizona to a Final Four appearance. In his senior season, he averaged 22.3 points per game and made All-American honors. Stoudamire is the only player in Arizona history to have two 40 point games. In four years at Arizona, Stoudamire averaged 15 points, 5.4 assists per game. Also, he shot 45% from the field and 40% from three-point land.

At the guard position, it started to get hard to pick the players, but at two-guard, I went with Salim Stoudamire. Stoudamire could flat out shoot and shoot it from a distance. As a senior, Stoudamire shot 50% from three-point land. In four years as a Wildcat, Stoudamire averaged 15.2 points per game on 47% from the field and 45% from three-point land. Stoudamire made 342 three’s and led the 2005 Wildcats to an Elite Eight appearance with a fadeaway jumper with less than two seconds left to beat Oklahoma State.

Maybe one of the best Arizona Wildcats players ever, Sean Elliot was a no brainer on this list. Elliot was a Pac-10 Freshman of the Year and two-time All-American. In his senior season, Elliot averaged 22.3 points per game. In four-seasons at Arizona, Elliot averaged 19.2 points on 51% shooting from the field and 42% shooing from behind the arc. Elliot got better every year as a Wildcat; his points per game went up in all four seasons. He is Arizona’s all-time leading scorer.

Derrick Williams was an excellent all-around forward for Arizona basketball. In his two seasons with the Wildcats, he averaged 17.8 points, 7.7 rebounds, and shot 58% from the field. As a sophomore, Williams was arguably the best player in college basketball. Williams’ ability to score down low and shoot from the outside made him difficult to defend.

Deandre Ayton was pretty much a no brainer at center, even though he played just one year in Arizona. As a freshman, Ayton averaged 20.1 points per game, 11.6 rebounds, and 1.9 blocks. Ayton also recorded 24 double-doubles with the Wildcats. The former Arizona center shot 61% from the field and was Pac-12 Player and Freshman of the Year. Ayton was a monster on both ends of the floor for Arizona basketball.