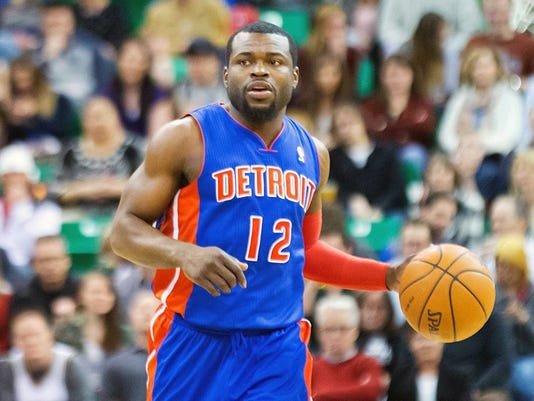 Will Bynum enjoyed a prominent college hoops career filled with winning, followed by a very successful NBA career, highlighted by six years with the Detroit Pistons.

At 6-feet tall, it’s always been heart over hustle for Will Bynum. The former NBA veteran worked hard for the career he earned, enjoying a successful role as a backup point guard with the Detroit Pistons during the late 2000s and early 2010s.

Bynum was first on the map during his high-school hoops days, making a name for himself throughout inner-city Chicago.

“Coming out of high school, I wanted to be a pro,” Bynum said, “I was the top guard in the city of Chicago and I had been playing against pros.”

This even included the great Michael Jordan, among other NBA stars, whom Bynum would often compete against during pro-ams.

This level of competition allowed Bynum’s skill set to be among the best in his recruiting class, where he eventually settled on the Arizona Wildcats. “I knew that I wanted to go to a program that produced NBA point guards because I was trying to soak in as much knowledge as I could to be able to be a value to go to the NBA,” said Bynum.

On the court, he was able to fit in right away on an extremely talented Lute Olsen coached Wildcats team that was one of the best at that time at getting players to the NBA.

However, off the court, it was a different type of adjustment. Bynum explained how coming from inner-city Chicago to Tucson, Arizona was a blessing in disguise, even if it wasn’t the easiest transition. “It was great in a sense where for me, it was so different because I was coming from Chicago in a city that wasn’t as diverse as Arizona was,” Bynum recalled, “It was a tough adjustment for me at the time, leaving my family and being so far away.”

However, whatever homesick feelings he had didn’t show on the court. Bynum excelled as the backup point guard on a team that featured a starting backcourt of 20 points per game scorer Jason Gardner and fellow future NBA draft pick Salim Stoudamire. Nonetheless, Bynum was able to score 6.4 points, and grab 1.5 rebounds along with 1.4 assists per contest. This resulted in Arizona going 24-10, winning the Pac-10 Championship, and advancing to the Sweet 16 of the NCAA Tournament in the process.

Bynum described his time at Arizona as a “family-type atmosphere”, where they had one of the top teams in the country during the 2002-03 season, going to the Elite Eight, and often sitting atop the polls as the number one team in the country.

However, Bynum’s time in Tucson came to an end eight games into the 2002-03 season, deciding to transfer to Georgia Tech.
Embed from Getty Images

Bynum excelled as a Yellow Jacket, scoring 9.6 points and 2.5 assists along with 0.9 steals per game during his junior year. These averages were upped during his senior season when he put up 12.5 points, 2.5 assists, and 2.5 rebounds while pairing up in the backcourt with another future NBA guard in Jarrett Jack.

To this day, Bynum says his relationship with Jack his still great to this day. He told me about how their bond over similar work ethics created their friendship:“That was special. Jarrett was one of those guys like me, where at night time when nobody was around at one o’clock in the morning, I would see Jarrett at the gym. We always connected from that point and we were always extremely competitive. Jarrett is like a brother to me. To this day, as we get older and older and closer and closer, it’s been a blessing having him in my life.”

That year, Will Bynum and the Yellow Jackets fell to Louisville in the Elite Eight of the NCAA Tournament. His next step was to prepare for the NBA Draft, his lifelong goal.

Bynum told me he gave it his all during pre-draft workouts and preparation, eventually earning multiple NBA workouts including one with the New York Knicks and Nate Robinson.

Although Bynum fell short during the draft, he was picked up later that night by the Boston Celtics, who gave him a guaranteed rookie contract. “At the time, I didn’t even know what that meant,” Bynum said, “My heart was still crushed from not getting drafted.”

However, after injuring his hamstring, Bynum soon found out how important his guaranteed contract was. It meant he was able to focus on rehabbing the right way instead of searching for his next contract. He did just that, won D-League Rookie of the Year, and was able to keep his NBA career alive.

Will Bynum will most be remembered for his time in Detroit, where he played for over half a decade.

While in Detroit, Bynum primarily served as the Pistons’ backup point guard, where he averaged a career-high 10 ppg and 4.5 apg during the 2009-10 season, starting 20 games. Bynum continued in his key bench role for four subsequent seasons, providing an important spark of tough play and hustle.

“Detroit was kind of like home for me,” Bynum said, “Joe Dumars definitely believed in me and gave me the chance. More than anything, he always told me the truth. We have a great relationship today because of that.”

Today, Bynum is still around the basketball game, following both NBA and college. He gave me insight into Seton Hall’s Myles Powell, another player of similar stature but with an incredible work ethic.

Of Powell, Bynum said, “Anything you’ve wanted to see of him, he’s done over the course of his time at Seton Hall.”

In a sense, those words of wisdom can also be said of Will Bynum himself. He left it all on the court and more during his collegiate and professional careers, and that’s something he can always be proud of.