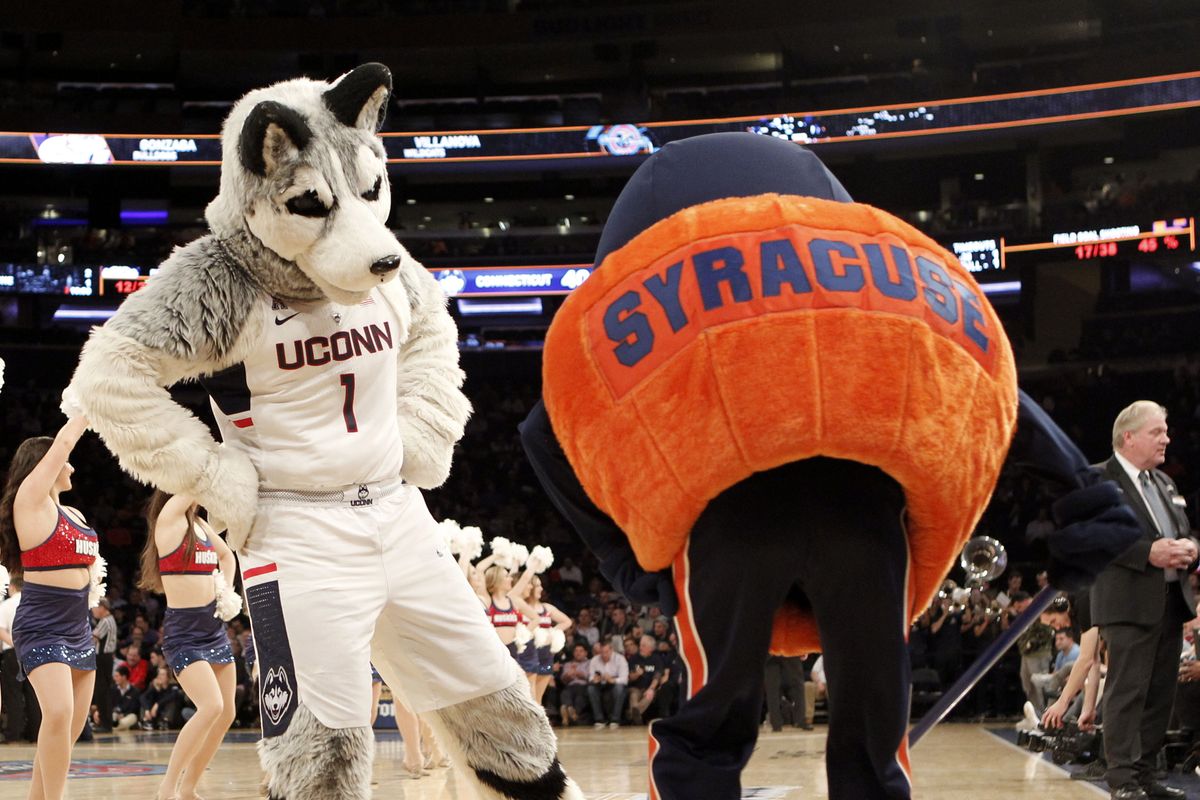 Father coaching against son. Old rivalry renewed. Here are some of the best college basketball matchups that need to be scheduled as soon as possible in 2020-21.

For old times sakes, am I right? The former Big East arch rivals have faced each other 95 total times, with the Orange coming out on top in 56 of those. However, this rivalry has more behind it than a long history of games played between the two schools. Both teams actively state their case for being the so called ‘sixth borough’ of New York City, with each having legitimate cases for that title. The two northeast powerhouses have long had ties to the ‘Mecca of basketball’, as they call it. For Syracuse, it’s the city down the New York State Thruway. For Connecticut, it’s only a short trip down I-95. And in basketball, these two schools have dominated Madison Square Garden. The Huskies are tied with Georgetown for the most Big East Tournament titles, with seven. However, the Hoyas first two Big East Championship wins were actually played at the Providence Civic Center and Hartford Civic Center respectively. As for the ‘Cuse? Well they took home five of their own during a near 35 year run in the Big East conference. The two schools have also created some of the most memorable games of all time. In 2009, Syracuse fought hard and tirelessly, winning a classic six overtime thriller over Connecticut in The Garden. The Huskies tend to counter that with the four National Championships to Syracuse’s one – all five collectively coming since 1999. Whichever side you take, this one always produces some classics. UConn took the last matchup, 83 to 76, on November 2018. Both are also slotted to face off in the 2021 Battle 4 Atlantis Tournament. However, I’d vouch for another precursor this season if possible.

This is one of the most uncommon matchups of all-time, as the two programs have only faced off once. However, in 2020, this one needs to happen. The Bears are coming off of one of their best seasons in program history, after being ranked as high as first in the nation, and finishing the season with an incredible 26-4 record. This included top-20 wins over Villanova, Arizona, and Butler in the non-conference slate, and ranked wins over Texas Tech, West Virginia, and at the time, a third ranked Kansas Jayhawks team. How’d they do it? Defense. Head Coach Scott Drew’s squad ranked 25th nationally in opponent field goal percentage (39.7%), fifth in total field goals allowed (643), and third in total points allowed with 1,804, averaging at 60.1 points allowed per game, according to sports-reference.com. Next season, it may only get better. The Bears are only expected to lose Freddie Gillespie, who has used up all of his collegiate eligibility. That means that leading scorer Jared Butler, amongst a heavy returning class, will most likely be coming back to compete for a National Championship. If Tristan Clark can get back to his sophomore season form, it could make up for one of the best teams in the country yet again.

But Baylor hasn’t always been the mastermind of defensive. That’s where the Virginia Cavaliers come in. Head Coach Tony Bennett has implemented such a defensive mindset, legend has it even the Cavaliers get bored watching their own games. All jokes aside, their defensive style is mastery, and would lead to an impeccable game with Baylor next season. According to sports-reference.com, The Cavs have finished first or better in the NCAA in points allowed per game in six of the last seven seasons, while not finishing outside the top five since the 2010-11 season. In other words, they consistently play defensive better than anyone in college basketball, and frankly, it isn’t even close. A matchup with Baylor would give the college basketball world some of the best defensive basketball they may ever watch, while also providing quality content as well. Virginia loses a few players from last season, including Mamadi Diakite, who saved them en route to their 2019 National Title. However, most analysts believe UVA will still be ranked to start off next season, meaning a matchup with Baylor would surely catch everyones attention.

A mid-major versus a Minnesota basketball team that is far from an annual competitor? Why yes. Really all I need to say is how the head coach of Minnesota is Richard Pitino and the newly appointed head coach of Iona is his father, Rick Pitino. But I’ll go further than that. The younger Pitino, Richard, has been the coach of Minnesota for seven seasons, leading the Gophers to two NCAA Tournament appearances. He also guided the Gophers to an NIT Championship in 2014. His elder Pitino, Rick, is a college basketball legend. He started as an assistant coach at Syracuse, when Jim Boeheim famously forced Pitino to skip his honeymoon and help recruit Louis Orr, a future SU star. Pitino only stayed three years, but quickly shot up the college basketball ranks, becoming the head coach of Kentucky in 1989, before departing to the Boston Celtics for a short stint from 1997-2001, and then returning to college as the head coach of Louisville from 2001-2017. A scandal that involved Pitino handing out illegal benefits to recruits forced him out of the Cardinals’ job, but three years later and he’s made it back to the collegiate game, now as the head coach of Iona basketball.

Father and son have faced off before, as seen above when Louisville took on Minnesota. Even though that matchup featured two power conference teams, a Minnesota and Iona game may have more intrigue. For one, Richard Pitino has been coaching longer, and Rick Pitino is back after a short stint away for the college game. This one would be more anticipated, even if it features a mid-major team. This could be the older Pitino’s last stop in college basketball, and matchups like this don’t come around too often. However, there is actually some unspoken beef as well.

The point guard for the Iona Gaels is Isaiah Washington, a former four-star recruit according to 247sports.com. Washington, who had offers at many of the top schools in the country, including Seton Hall, Rutgers, Providence, and Georgia Tech, ended up choosing – you guessed it – Minnesota. The guard only lasted two years there however, with his averages and playing time dipping from his freshman to sophomore season. However, at Iona, he found a niche. Washington put up over 11 points per game and four assists last year, proving his capabilities as a scoring point guard. But in between that time, Rick Pitino had some choice words on Washington, saying:

“I’m not crazy about the point guard position… Now if Isaiah Washington can mature out of the social media world and into the real basketball world of how to get it done, then they’ve got great promise. If not, he’s got to find a different point guard and move in a different direction.”

Ouch. Now since then, Washington, part of the ‘Jelly Fam’ coming out of high school may have lost that ‘social media’ way about him and matured like Rick Pitino insisted. Either way, it makes for a very interesting dilemma, and a game I’m all about watching.

Much like the Baylor and Virginia idea, this one really doesn’t have much behind it to begin with, but would produce a very quality game of basketball. Gonzaga has gone from ‘Cinderella’ to top dawg in the mid-majors, to one of the best teams in America, year in and year out. The Bulldogs have been ranked inside the top ten in the AP Poll at some point during the season since 2014, and was the runner-up in the 2017 NCAA Championship. However, playing in the West Coast Conference does provide it’s limitations, and while Mark Few tries to schedule a few quality non-conference opponents each year.

What better way to squash this stereotype than to annually schedule the Oregon Ducks – the Pac 12’s premiere program over the past decade. The two squads actually did play last season, with Gonzaga coming out on top, 73-72 in overtime in the Battle 4 Atlantis Tournament. With that being said, if these teams made it a yearly matchup, it could create one of the better West Coast rivalries in college basketball, while giving fans a chance to see a top-25 matchup virtually every year. The two programs also boast some of the best coaches in the college basketball landscape, in Mark Few and Dana Altman. Few is just one win shy of number 600, while Altman has compiled almost 700 career victories, over 250 of them coming with the Ducks. If this matchup does happen, you can expect it to be a thriller. Both teams have high expectations coming into the 2020-21 season, and it would certainly have that NCAA Tournament feel to it.

A lot would have to go right for this one to be played, but if it did happen, you could expect every college basketball fan in America to tune in.

In the early 2000s, it was not Duke and North Carolina. Instead, it was the Blue Devils and the Terrapins.

From the 1997-98 season through the 2002-03 season, Duke and Maryland always finished in the top three of the ACC, coming in at one and two more often than not. This also included a Duke National Championship in 2001, followed by Maryland winning the title in 2002. Simply put, these two were at the top of the college basketball landscape for nearly a decade, winning titles to prove it.

Then, in 2013, Maryland decided to depart the ACC for the Big Ten, citing football income as the main reason. This led to Duke Head Coach Mike Krzyzewski being infuriated at their decision, saying ‘We won’t schedule Maryland‘.

And they haven’t since that date. For seven years, one of the best rivalries in college basketball history hasn’t happened, and it may not happen until Coach K calls it quits. He went even further in his rant, citing the rivalry as irreplaceable now that the Terps changed conferences, and saying that the only way they ever face off in the regular season would be during an ACC / Big Ten Challenge.

Well, Coach K, it’s about time to rethink that.

While Maryland loses a decent amount going into next season, they still have enough talent to earn anyone’s respect. Match that up against a Duke team who brings in one of the best classes in 2020, and you’ve got a very interesting game on your hands.

Will it be done? I doubt it. Would it be fun? You bet, and I hope it happens.