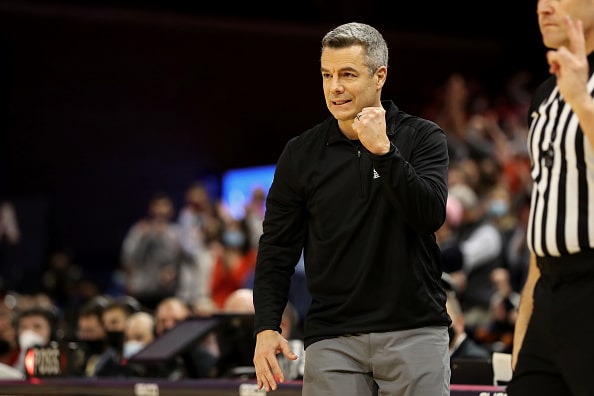 The Virginia Cavaliers had a down year to recent standards last season, but returns its entire starting lineup from a season ago and is ready to make it back atop the ACC.

CBB Review is once again ranking the top 100 teams heading into the 2022-23 season. Each day we will reveal the next team until we reach the team slotted at number one. Coming in ranked number 21 are the Virginia Cavaliers.

Tony Bennett has had a great track record in Charlottesville, posted a .730 winning percentage in 13 seasons. Last year was the first time since 2013 (excluding 2019-20 due to COVID) that the Wahoos failed to obtain a NCAA Tournament bid.

However, the team showed continuous growth throughout the season, and returns all five starters, one of which being Kihei Clark, who will be Virginia’s floor general for a fifth straight season. In addition, Bennett brings in the 13th ranked freshman class, his highest since 2016, when Kyle Guy, Ty Jerome, DeAndre Hunter, and Jay Huff arrived on Grounds.

Kihei Clark is a pivotal player for the Virginia Cavaliers, but Jayden Gardner was the catalyst for this squad a season ago, and that will remain for the upcoming campaign. Gardner, who averaged just over 15 points a game in his first season at Virginia, is the ‘Hoos big time scorer in the defensive priority scheme.

Jayden Gardner is a perfect fit for Virginia’s offense. The former American Athletic Conference Player of the Year (East Carolina) is elite from midrange and very creative in the post for someone of his size.

His role in the offense is like that of former Cavalier Anthony Gill. If the guards cannot create outside the arc, they will dish it to Gardner to create a good shot on his own, whether that is with a pivot of off the dribble. This is crucial for the Virginia Cavaliers, as the offense tends to get ice cold for stretches of a game, and Gardner can limit dry spells.

The Virginia Cavaliers shot just 32% from beyond the arc last season and failed to make the tournament. The offense relies heavily on the three-point shot, and the few shooters Virginia had on the roster failed to carve out much playing time or did not produce at a high clip.

Vander Plas comes in from Ohio University, but this transfer is not his only interaction with Virginia. He and his squad knocked out Virginia in 2021 in the first round. Furthermore, his full name is Bennett, named after Tony’s father, Dick Bennett.

Vander Plas is a shooter. There’s no other way to describe his offensive game. He averaged just below 35% from beyond the arc the past two seasons and shoots in volume, averaging just below six shots from bonus land per game. If his shooting can remain consistent, he will give Virginia’s offense an added spark it so desperately needs.

Ah yes, one of KenPom’s statistics that seems to be nicknamed “the Virginia stat.” AdjD, which is an abbreviation for Adjusted Defensive Efficiency, is how many points a team allows per 100 possessions. It is indeed safe to assume that Tony Bennett’s packline schemes usually sits atop this category.

However, Virginia ranked just 59th in the country last season in AdjD. Coincidentally, it was the first time Virginia missed the field of 68 since 2013. In contrast, Virginia was first and fifth in AdjD in 2018 and 2019, respectively. Those years, the ‘Hoos garnered one seeds and won the NCAA Championship in the latter season.

Tony Bennett rarely relies on freshmen, but the shallow rotation forces Bennett to make the decision: use freshmen before he deems them ready on both sides of the ball or play with a shortened rotation.

Aside from the returning starting five, Vander Plas and Francisco Caffaro are the only two non-freshmen who have played legit college minutes. Taine Murray showed signs of offensive capabilities but looked a little lost in the packline scheme. The rest of the bench consists of freshmen.

What Virginia Cavaliers fans are calling “Isaac Squared,” Traudt and McKneely are the ‘Hoos top two recruits. McKneely seems the most physically capable of the four, and he already has learned the packline from high school. Traudt has the highest upside in the class but might need another year of strength training before he earns important minutes.

Virginia has a tough out-of-conference schedule before it begins the ACC gauntlet. Their first test is when they play Baylor on a neutral floor, but Northern Iowa and Monmouth before that could give Virginia trouble. After the matchup with the Bears, Virginia travels to Ann Arbor to face Michigan, and then hosts Houston the following month.

Those games will obviously be battles for Virginia, and the tough ACC will be the furthest thing from a cakewalk. The good news for Virginia, though, is a little more leeway will be given by the selection committee. Losses to good teams will matter a lot less than wins against them.

The Virginia Cavaliers could realistically end up in the top three of the ACC at the end of the season. That coupled with a deep ACC Tournament run can put Virginia in the 2-3 seed conversation, and then, in March, anyone can get hot and make a run.