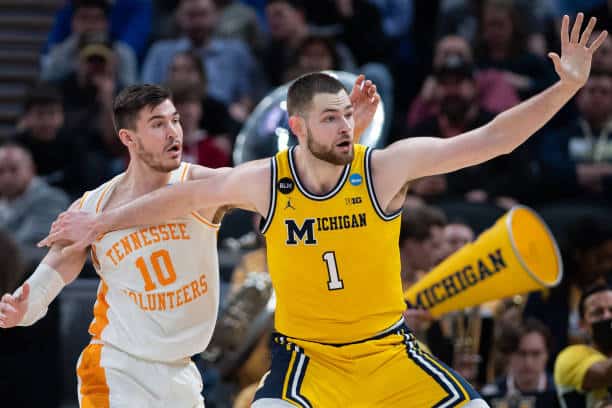 CBB Review is once again ranking the top 100 teams heading into the 2022-23 season. Each day we will reveal the next team until we reach the team slotted at number one. Coming in ranked number 25 are the Michigan Wolverines.

Last season was an up and down one for Michigan. They were projected to win the Big Ten to start the season, but they then started out 7-7 overall and 1-3 in Big Ten play.

To those who have not, click here to learn more about our preseason top 100 teams in the 2022-23 college basketball season. They then pretty much alternated wins and losses for the remaining two months of the season, leaving them near the bubble. There was hope though. They then blew a big lead to Indiana in the second round of the Big Ten tournament. So naturally, they went to the Sweet Sixteen as an 11 seed.

They lost four out of their five starters, but return Hunter Dickinson who will be looking to go on a run for Big Ten player of the year. Combine that with some good transfers and freshman, and the Michigan Wolverines looks to once again have lofty expectations.

What is there to say about Dickinson. He was by far the most important piece for Michigan, and one of the best players in the Big Ten. Last season he expanded his range to include some threes, which he shot at a decent clip.

He was absolutely dominant in the low post. Per Synergy, he ranked in the 94th percentile of efficiency on post-ups, and he had one of the highest usages of post-ups in the country. When he gets over that right shoulder, there is not much defenses can do. Although there are new pieces surrounding him, there is no reason to believe that Dickinson won’t be everything he was last year and more for Michigan.

One area to watch is his pick and roll defense. Teams often tried to attack him when he was in drop coverage, and it forced Michigan to go zone at times.

The Michigan Wolverines needed a point guard and they got a heck of one in the transfer portal in Llewellyn. He was one of the top transfers in basketball last season, and he will provide a much needed secondary scoring punch to the Wolverines.

He is very comfortable handling the rock, and he was one of the more efficient players in pick and roll last season. He is more of a score first guard, but he is more than capable facilitating for others.

He is also a very good shooter, ranking in the 81st percentile in catch and shoot opportunities per Synergy.

The two man game between him and Dickinson is going to be fun to watch. There is a question about whether his talent will translate from Princeton. However, he is a veteran guard and should be capable of the making the jump.

Analytic to Know: 0.884 Points Per Possession against Pick and Roll Ball Handlers in 2021-22

Teams went at Michigan in pick and roll. Specifically, guards were able to get downhill if the big played up, or they could pull up if the big was in drop coverage. There is hope that a bigger more wingish team will help the guard play in defending pick and rolls. Dickinson will also need to show a little mroe mobility for this defense to take a step up.

The 0.884 points per possession against pick and roll ball handlers landed them in the 6th percentile per Synergy, very very close to the bottom.

The Michigan Wolverines will once again have lofty expectations. It will be interesting to see how Juwan Howard and company handle them this season. There is a lack of proven depth on this team, and Michigan will likely rely on three to four freshman and two transfers a lot. Only three players projected to play quality minutes for this team, played quality minutes last season for Michigan.

Be on the lookout for a Terrance Williams II breakout year. He showed a lot of promise as a backup forward last season, shooting the ball well and being very active on defense.

Freshman Jett Howard, son of Juwan, will fill in a lot of the Caleb Houston role. If things break right, Jett could very well end up being a one-and-done. He has great size and shooting that should prove useful right away.

We will see what this Michigan team is made of come late November and early December as they will play both Virginia and Kentucky. They will also play North Carolina around Christmas, so Michigan Wolverines fans will get a very good look at whether this team is legit or not.