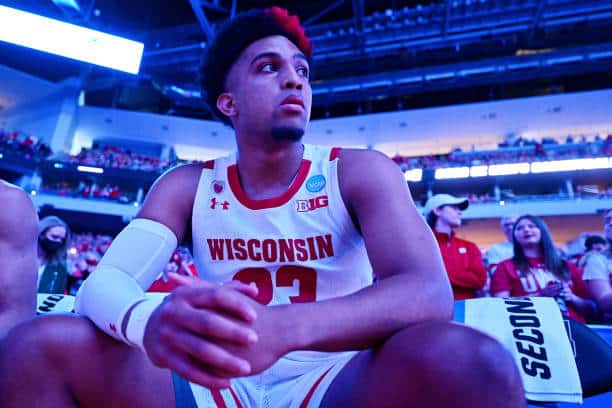 The Wisconsin Badgers just won their second Big Ten title in three years. With Johnny Davis off to the NBA, there will be big holes to fill if they wish to do it again.

CBB Review is once again ranking the top 100 teams heading into the 2022-23 season. Each day we will reveal the next team until we reach the team slotted at number one. Coming in ranked number 49 are the Wisconsin Badgers.

Wisconsin was projected by many to finish near the middle or bottom half of the Big Ten last season. Then Johnny Davis exploded for one of the better Big Ten seasons in recent history. Now with him gone, coach Greg Gard will have his hands full trying to replicate that production.

Wisconsin returns a few key pieces from last year in Chucky Hepburn and Tyler Wahl that will most certainly need to step up. This should be once again a solid defensive team, but the question all year will be whether this team can score or not.

Wahl is the leading returning scorer for the Wisconsin Badgers, and with Johnny Davis gone, Wahl will have plenty more opportunities to get shots up. There will be a big scoring gap within Wisconsin to start, and Wahl appears to be first in line to get some of those opportunities.

At 6’9, Wahl takes advantage of posting up opposing 4s. His post-up skills put defenses in awkward positions, as they are not always prepared to guard down low. He is really good at going over his left shoulder, and his favorite is a drop step over the right shoulder. Wahl combines length with good footwork makes him a difficult player to guard. He also understands the game and how to set up opponents.

One area where he has been lackluster is his perimeter shooting. He shot 16% from 3 last season, taking about 1.5 per game. If this percentage can get to something respectable, it will add a needed perimeter threat to this Wisconsin squad.

Chucky will be one of the major breakout potential players in the Big Ten. He started all 33 games for the Badgers, and he will only have an expanded role this season. He is a big guard that is able to muscle opposing guards to get where he wants.

Hepburn was very good in the pick and roll, both as a scorer and facilitator. He has a pretty good handle and feels for the game. He was a pretty good pull-up shooter last season out of pick and roll, getting a lot of open shots from teams going under on the screen. If teams start going over and playing drop, he will have to prove more than he can both get to the rim and pull up from the mid-range.

As is the story with Wisconsin, Hepburn was not a great shooter. He is their best-returning shooter at 34.8% from 3. The number of attempts is undoubtedly going to increase, but Wisconsin will need the efficiency to jump up as well.

The Wisconsin Badgers were a terrible three-point shooting team last season, at just over 30% as a team. They were also the worst in the Big Ten. To add to that, the Badgers lost two of their best shooters in Davis and Davison. Chucky Hepburn will be one of the main perimeter threats, but will someone else be able to step up? Or will Wisconsin be focused on not turning the ball over again (they were second in the country in TO% last season) and play an inside game?

The Wisconsin Badgers will once again be projected to finish toward the middle of the Big Ten. They will need another surprise jump from someone to be able to have the success they did last season. Hepburn and Wahl will provide a lot of support. Will someone like Jordan Davis or Jahcobi Neath make that much-needed next jump to propel the Badgers?

We will get some answers early in the season as they will take on Stanford and play in the Battle 4 Atlantis Tournament that features Butler, BYU, Dayton, Kansas, NC State, USC, and Tennessee. Wiscnson will be guaranteed a couple good matchups that will provide a lot of insight into their potential this season.

Their Big Ten schedule will once again be a grind (as it is for everyone). Their third game will be at Illinois which will be their first very big test in the conference. The Wisconsin Badgers’ opening Big Ten matchup at Iowa should provide some intel as well. Both teams will be looking to prove that they can once again repeat their success from last season.