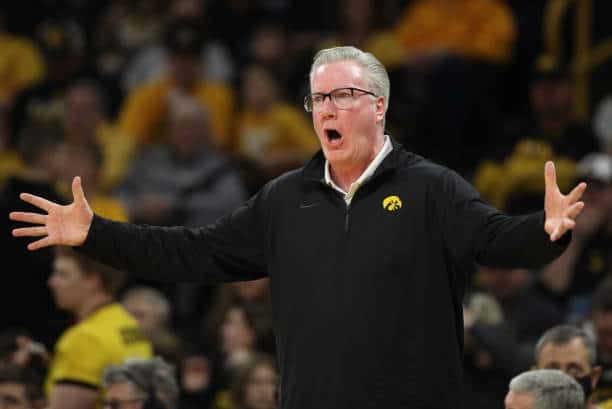 The Iowa Hawkeyes lost superstar Keegan Murray, but there is hope that others, including twin brother Kris, will be able to get Iowa back to their success level last season.

CBB Review is once again ranking the top 100 teams heading into the 2022-23 season. Each day we will reveal the next team until we reach the team slotted at number one. Coming in ranked number 46 are the Iowa Hawkeyes.

Iowa was able to win the Big Ten Tournament after having a super hot end of the regular season. They got bounced in the first round of the NCAA tournament, but there was still much to be happy about in Iowa including having one of the top offenses in all of college basketball. A team that likes to get out and run, the offense based itself on the superstar emergence of Keegan Murray who was picked 4th overall in the 2022 NBA Draft. With him gone, there is a lot to fill this season.

Keegan’s twin brother Kris will be looked upon to take a bigger role. There are also a lot of other wings on this team including Patrick McCaffery and Filip Rebraca that will make Iowa once again play their up tempo brand of basketball.

The Iowa Hawkeyes going to need a massive jump in production from Kris this season if they want to replicate last year’s productivity. Fortunately enough for them, Kris has shown he has the tools to be a leading scorer on a team. He was fourth in the team last year in scoring, although he was 7th in minutes played. He projects to absorb a lot of the Keegan minutes that will be available.

Many will be expecting Kris to make the jump that Keegan did last season. Although possible, I don’t think it is fair to put that kind of expectation on Kris this season. The biggest difference between the two on offense is Keegan was more willing to go down low and post up, where he was one of the most efficient post men in the country. Kris plays more on the perimeter where he exceled as a spot up shooter last season. Per Synergy, he averaged 1.168 PPP on catch and shoot attempts which ranked in the 91st percentile.

Patrick McCaffery, son of head coach Fran McCaffery, had a very nice second season in which he was able to double his scoring output to 10.5 points per game. He is a lanky forward that is comfortable running some offense on the perimeter. At 6’9, he poses some interesting problems for opposing defenses when being the ball handler in pick and roll.

When spotting up on the perimeter, McCaffery is comfortable shooting and driving both ways. He prefers to catch and shoot but has no issue putting the ball on the ground. With some of the shooting for Iowa gone, it will be important for him to be able to bump up his 3 point percentage from the 33% that it was last season. He is also a lanky defender that can disrupt some ball handlers and some post players.

One thing Iowa did not do last season was turn the ball over. When taking into account that they were one of the more up tempo paced teams in the country, it becomes even more impressive. This season however, they only have 1-2 true point guards on the roster and a lot of wings. Some forwards will have to take care of the ball for the TO% to stay as low as last season.

Another daunting Big Ten schedule faces Iowa this upcoming season. They start out with an interesting matchup against Wisconsin, another team that lost a superstar and is hoping to prove people wrong again.

This Iowa team is going to be fun to watch. They once again are going to be up tempo, with an efficient offense. I think they are one of the most underrated teams from the Big Ten. Their offense projects to maybe take a small step back, but I do not see why it won’t be near what it was.

What will make or break this Iowa Hawkeyes team is the defense. They were a slightly above average Big Ten defense last season, due in large part because of their pressing defense that forced turnovers. Iowa will have more length than last year to make the press even more miserable to go up against. There will definitely be lineups that feature players all 6’4 – 6’10 in height. That is tough to get passes through. They are going to cause a lot of teams panic when they are trapping everything in the back court.