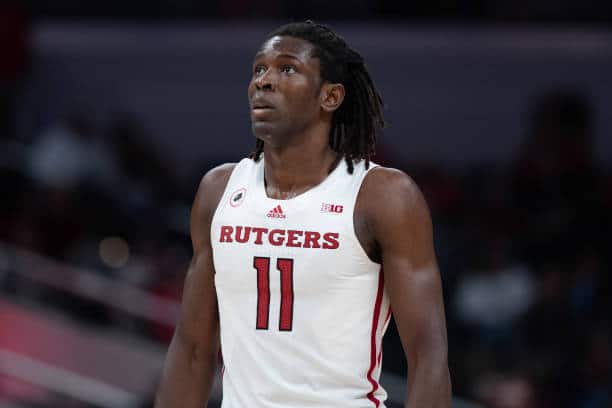 Steve Pikiell has turned the Rutgers Scarlet Knights around but will be faced with a tough task as two program-changing players depart and a new era starts.

CBB Review is once again ranking the top 100 teams heading into the 2022-23 season. Each day we will reveal the next team until we reach the team slotted at number one. Coming in ranked number 54 are the Rutgers Scarlet Knights.

This Rutgers Scarlet Knights team will look a lot different than the teams of the past. It’ll be the first time since the 2017-18 season that Geo Baker and Ron Harper Jr. won’t be teaming it up in Piscataway. That means it’s a new scene at The RAC, which puts forth all sorts of emotions, from hope about the new era to nerves about where this program goes from here.

One thing is for certain – this Rutgers team will still have the mindset of an overlooked squad of hardworking players. Most of these guys were not highly recruited, yet have been able to stay competitive in arguably the toughest conference in America, the Big Ten.

You’ll also see a lot of small-ball. While the starting backcourt features two players at 6-6 and 6-7 respectively, the projected three and four guys are also 6-7 and 6-6 respectively. That leaves Clifford Omoruyi as the lone player standing above 6-8 in the starting lineup. Although with his talent, that’s not necessarily a bad thing.

Overall, it’s a Scarlet Knights team that will have some questions as far as who takes over in leadership roles. But it’s not necessarily a young or inexperienced team. There are still a lot of veterans ready for expanded roles. It’s just about replacing Baker and Harper.

The Big Ten is turning into center-central with all of the great big men in the conference. Even with Kofi Cockburn, E.J. Liddell, and Trevion Williams no longer in the conference, the Big Ten is still led by the likes of Trayce Jackson-Davis, Hunter Dickinson, and Zach Edey. You can throw Clifford Omoruyi into that conversation as a dark horse.

On a team that brings back a few returning starters who noticeably struggled from the field last season, Omoruyi is the definition of an efficient player. He made over 60% of his shots from the field in 2021-22 and took away over a shot per game from opponents. On the glass, Omoruyi grabbed nearly eight rebounds per game, which is key on a team that will be fairly small at the four.

With Baker and Harper gone, it leaves the door open for Omoruyi, a rising junior, to take a step up in the offense. The Rutgers Scarlet Knights will be counting on multiple players to increase their scoring loads, and Omoruyi looks like the best bet to do so.

Bench play will be key for this Rutgers Scarlet Knights team and Cam Spencer will be the x-factor. Pikiell didn’t bring in a monster recruiting class and Spencer was the only transfer making his way to Central Jersey. On a team that does return a fair amount of players from last year’s NCAA Tournament squad, the bench is still very thin.

The senior lit it up at Loyola (MD) where he was named First-Team All-Patriot League after averaging nearly 19 points per game and putting in work in the glass and as a playmaker.

Spencer might actually be exactly what this Rutgers Scarlet Knights team needs. He has extreme confidence in looking for shots and while he utilizes his jumper the most, can finish through contact in the lane. As the likely sixth man in the rotation, Rutgers will need Spencer to come in as a spark plug off the bench.

It’s the hard-nosed way about Steve Pikiell and what he’s brought to this Rutgers Scarlet Knights program. It’s what you get when you have so many overlooked players looking to prove everyone wrong in a power conference. It’s the Rutgers way.

Last season, the Scarlet Knights stifled opponents in the Big Ten, holding them to an average of 66.3 points per game. When Rutgers upset number one Purdue, the Boilermakers only scored 68 points on 41% from the field. Michigan could only muster up 67 points. Keegan Murray was held to 13 points on 5-of-14 shooting as Rutgers downed Iowa 48-46 at home.

Part of it is the home court advantage at Jersey Mike’s Arena. It’s a tough place to play. But when it gets down to it, Rutgers carries that defensive intensity wherever they go. You’re not going to escape it. You’ve just got to survive it.

Continuing on that defensive thought, this Rutgers Scarlet Knights group is no different than years past. Mulcahy and McConnell combined for over three steals per game last season. They’ll continue to bring that pressure in the backcourt this year.

Spencer, the transfer from Loyola-MD, wreaked havoc in the Patriot League, causing turnovers left and right. Last season, he averaged 2.3 steals per game.

One thing that could ease the mind of Rutgers fans worried about who will take over from Baker and Harper is the playmaking abilities of Mulcahy and McConnell. They were both key in setting up players last season, with Mulcahy averaging over four dimes per game. Given their proven abilities in that part of the game, the offense does have that going for it.

We’ll get a really good feel as to how competitive this Rutgers team will be, or if the losses of Baker and Harper do make for a slight dropoff. The Scarlet Knights’ non-conference schedule includes an away game against Miami (Fla) and home contests versus Seton Hall and Wake Forest. While it’s not an insanely difficult non-conference, the Big Ten schedule blends in with some of those games, making it more challenging.

As with the past two seasons, it’s not about Rutgers getting to 25 wins. If they do, they should be taken seriously. Rather, as a middle-of-the-pack Big Ten team, the Scarlet Knights need to push for a 20-win season and around .500 in conference. If they can do that, a third straight NCAA Tournament appearance seems plausible.