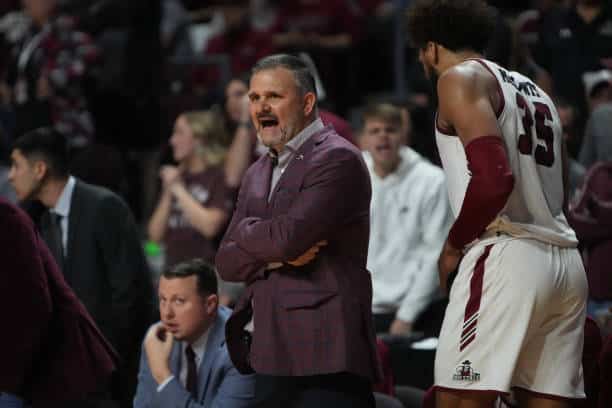 With a core roster and head coach, the Mississippi State Bulldogs hope to build back some power in the SEC.

The countdown is officially on. For the second straight year, CBB Review has ranked the top 100 teams in college basketball heading into next season. We will reveal the next team daily until we get to number one. Our number 96 ranked team is the Mississippi State Bulldogs.

In the past few years, the transfer portal has been a beast for all teams, and some coaches are taking advantage. With head coach Chris Jans coming in from New Mexico State to this power conference, he lost six players to the portal.

However, Jans adjusted and brought in five players from the portal, including one from his former team. Jans also lost two players to professional careers in Iverson Molinar (Milwaukee Bucks) and Garrison Brooks (New York Knicks). A culture change is likely coming at Mississippi State basketball with the type of basketball Jans likes to play.

Ben Howland did not receive a new contract with Mississippi State and, at 64 years old, it is likely a good reason. The Bulldogs brought in the very upward and mobile Jans. He has much to prove, but if anyone is willing to grind it out, he is the man for the job.

After suffering an injury last year to hurt his stats, Smith has continued to improve. This year I believe he will become a leader on Mississippi State. Coach Jans is a tough coach and creates tough players. Smith will likely be the dominating force with soft hands, a big wingspan, and the ability to slide behind defenses. He has solid footwork and creates shots.

With so many of the great big men in the SEC off to play professionally, Smith will likely be a leading rebounder in the conference. That includes his teammate, Garrison Brooks, opening up even more opportunities on the galss. With his ability to affect shots, keep players in front of him, and create space for easy buckets, Smith is poised for a big year.

Davis has shown to be a massive asset without scoring the ball. He had a rough go at Oregon State when shooting from outside, at under 20%. While he wasn’t a significant contributor from a shooting perspective last season, he contributed by finding and creating shots for others, coming up with rebounds, and creating takeaways.

If Davis can become a more productive three-point shooter, he could easily be a leading scorer for the Mississippi State Bulldogs. Davis is hoping to complete the transition from a junior college player to a prominent NCAA Division I player. With his size, speed, and ability, he can continue to get better.

The biggest weakness for the Mississippi State Bulldogs is shooting threes. Thankfully, Coach Jans does not focus on the three-pointer but does put an emphasis on creating shots and taking high percentage shots. Not surprisingly, it will be difficult to survive in the SEC without shooting from outside at a high level, but he has enough weapons that can keep them honest.

Looking at the SEC, CBBReview has the Mississippi State Bulldogs as the 12th-ranked team in CBBRank. I can see why this is the case with the new incoming coach and the loss of some significant pieces. However, looking at the conference, I think they can win at least seven games in conference play.

Looking at the conference schedule, Mississippi State, should beat Georgia and Vanderbilt and split with Auburn. The Bulldogs also should also be in play to take wins over teams like Florida, LSU, Missouri, Ole Miss, and Texas A&M.

Looking at the nonconference (limited), in the SEC/Big12 matchup, Mississippi State goes against TCU. While the Horned Frogs will be favored, the Bulldogs will can still come away with it. They also play in the Fort Myers Tipoff against Georgia Tech, Utah, and Marquette. The Bulldogs could easily take down Georgia Tech and Utah, and Marquette will also be a toss-up. With so much left for the nonconference schedule, this should be a fun year for a Bulldogs fan.

Besides Tolu Smith and D.J. Jeffries, no spots are truly locked for the Mississippi State Bulldogs. While I am going contrarian, Shakeel Moore is a solid player, but I think Eric Reed ends up in the starting lineup. On that same note, maybe he will become an off-the-bench player that springs him into a new player level.

The other returning player who may feel slighted is Cameron Matthews, but D.J. Jeffries is the better player with more experience. Matthews will be battling for a spot over the transfer portal player Tyler Stevenson who showed he can score, rebound, and has excellent timing for blocks. I’m curious to see who ends up earning that spot more, but I think that Stevenson’s experience gives him an advantage.