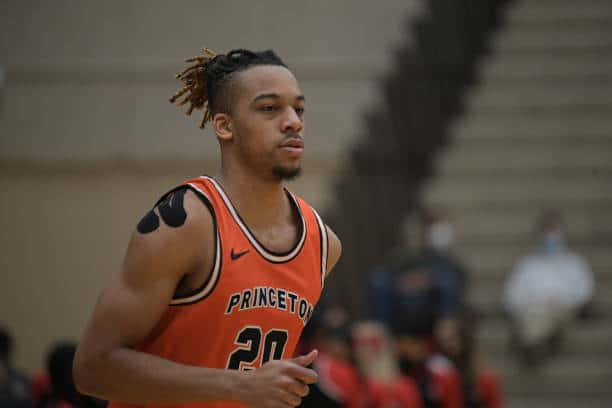 The Princeton Tigers return the Ivy League Player of the Year and hope that can propel them to an automatic bid into the NCAA Tournament.

The countdown is officially on. For the second straight year, CBB Review has ranked the top 100 teams in college basketball heading into next season. Each day, we will reveal the next team, until we get to number one. Our number 95 ranked team is the Princeton Tigers

The Tigers lost a notable number of transfers, including Jaelin Llewellyn to Michigan. However, the Tigers seem to always refuel and have a few bench players ready to transition into bigger roles.

Evbuomwan was the Ivy League Player of the Year as a junior. Instead of trying his hand professionally or in a power conference, Evbuomwan decided to run it back with the Tigers.

Evbuomwan’s game is highlighted in the middle of the Princeton offense. He makes plays from the low and high post, either passing it out to open teammates or muscling his way inside for a bucket.

Shooting range. isn’t part of Evbuomwan’s game. He only attempted 17 threes all last season and knocked down a pair. However, he’s dominant on the inside which allows guys around him to free up for open shots. There’s no doubt he’ll continue to be a force in the Ivy League and look for a second POY award.

Unless Princeton brings in a transfer (Verbal Commits currently lists the Tigers with a net loss of five players to the portal), Blake Peters seems most likely to fill into that role.

There are a lot of positives about Peters being able to comfortably adjust as the starting point guard. The Princeton offense doesn’t command him to come out every night and drop eight dimes per game. Evbuomwan, Ryan Langborg, and Matt Allocco will all chip in significantly, and take a bit of a load of Peters.

Plus, he’s just a sophomore. Expectations will likely be lower as he’ll be taking on the role with years to grow into his full potential.

However, looking at just this year, Peters will be thrust into the starting lineup with only 13 career college games under his belt. Welcome to the show, my friend!

This “analytic” isn’t too hard to understand. Last season, the Princeton Tigers ranked 11th in the country in points per game. Returning Evbuomwan means scoring the basketball should once again be a strength for this team.

There are some question marks on what’s a bit of a younger Princeton squad, but one name to watch is Konrad Kiszka. He was set to contribute solid points last season before going down in the first game of the year against Rutgers-Camden. But Kiszka did score four points in eight minutes, showing his potential as a role player on this year’s team.

Ryan Langborg and Matt Allocco look like the most likely names to help out in the scoring department, but Kiszka and a few other guys off the bench will look for increased minutes and roles this season.

Princeton loses numerous big names from last year’s NIT team. But they still return four of their top eight scorers from a year ago. The fact that Evbuomwan is one of them gives them hope they’ll be able to belittle the blow and continue to lead the Ivy League.

The biggest storyline is who will end up earning bench roles. The starting lineup seems solidified – unless I’m totally off with Blake Peters. However, the bench has some holes, and most of the guys looking to fix them only played sparingly last year.

The Ivy’s always a competitive conference but lately, the Princeton Tigers have found a way to stay near the top of the conference. That might be a bigger challenge this season, but they have the tools to make it work and get back to the Big Dance.