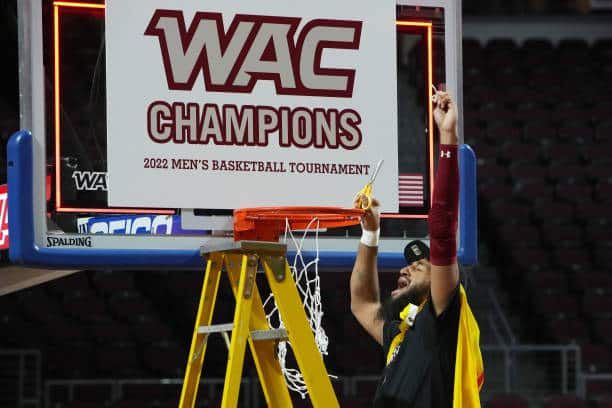 The New Mexico State Aggies look to continue their dominance of the WAC in 2022-23.

CBB Review is once again ranking the top 100 teams heading into the 2022-23 season. Each day we will reveal the next team until we reach the team slotted at number one. Coming in ranked number 88 is the New Mexico State Aggies.

New Mexico State has recently dominated the Western Athletic Conference. Since 2010 they have been the automatic bid nine times, including running through the WAC Tournament last season. Last March also featured the program’s first NCAA Tournament win since 1993 with an upset over 5th seeded UConn.

Despite the Aggies’ consistency, concerns lie in the fact that they lost a vast majority of their pieces from last season. In fact, their 7.3% returning possession minutes rank fourth to last in Division I. Head coach Chris Jans left the helm for Mississippi State as well.

The biggest loss for the Aggies is superstar Teddy Allen. He 6-6 forward dominated the WAC in his lone year, putting up averages of 19.6 points, 6.7 rebounds, and 2.5 assists. Replacing him will be near to impossible.

Despite all of this, many believe the drop-off will be relatively small due to confidence in new head coach Greg Heiar and the transfers he has brought in.

On a team dominated by low-level transfers, Pinson has plenty of experience at the D-I level, starring for three years at Missouri and then running the point for LSU last year.

Now, Pinson can put all of that to use in the WAC, where he figures to be one of the top players and sure leader of the New Mexico State Aggies.

Aggies fans should be excited about Pinson. He was able to find buckets in the SEC, dish out dimes, and turned into a turnover-forcing machine.

Two problems? Inefficiency and coughing the ball up. However, the move to a lesser conference of sorts could help Pinson solve some of those issues, and either way, he made it in the SEC, so it’s more about how much more he can improve in the WAC.

While most of the New Mexico State Aggies transfers come in from the NJCAA (a JUCO league), Roy played even further down the totem pole, at Salt Lake Community College last season.

And he dominated, clearly showing what he’s capable of.

But there’s a lot more to unpack here. Roy played his freshman season at San Francisco and saw the court in eight games, putting up a few points. So, we know that he was a D-I player to begin with. However, grading someone off their freshman year in a minimal role is next to impossible. Trying to decipher stats in a community college league is even more difficult.

One game to take into consideration was Roy’s 19-minute, 8-point performance against Gonzaga. Games like that leave me to believe that he could even be in play for a spot in the starting lineup. However, New Mexico State has a lot of forwards, and it’s tough to base everything on one time he got called upon. But my goodness did he put up some insane numbers!

Any time a new coach brings in a plethora of new players, a system change is likely to happen. One thing that could directly impact is how New Mexico State crashes the boards and what lineup they put forth.

Last season, the Aggies led the WAC in offensive rebounds per game and finished second in boards. Part of that is bound to change, as big men Johnny McCants and William McNair move on from the program. They helped set the tone for an Aggies team that actually finished atop the conference in ORPG the past two seasons.

To coach Heiar’s credit, he did bring in two transfers who have rebounding in their arsenal and retained two Aggies who could step up and fill in at power forward and center. 7-3 Bol Kuir is a complete wild card, but with that size, it’s hard to keep him out of any projected rotation. I have him near the bottom due to the experience of some of the other guys in the portal, but it’s clear that at some point, he could take over as the starting center.

One thing we do know – the New Mexico State Aggies look versatile by the players they brought in from the portal. You don’t always need to biggest and tallest players to crash the boards, but we should expect a high-spirited bunch that won’t let go of any possession.

Thanks for welcoming in SIX transfers from JUCO or CC, the New Mexico State Aggies have one of the most unique rosters in all of college basketball. Roy, Doctor Bradley, and Kyle Feit all had prior stops in Division I but weren’t rotation players.

Of course, all of this makes sense, because Greg Heiar, the new coach, comes from Northwest Florida State. That also happens to be where Deshawndre Washington and Issa Muhammad transfer in from. I’d have to believe at least one of them starts – they both were some of the top players in all of JUCO last year, leading the Raiders to a national championship over Roy and Salt Lake CC.

However, I also find it hard to believe that Marchelus Avery and Mike Peake would return if they knew they wouldn’t be in the starting lineup. They’ve had to wait their turn behind some great Aggies players and were both key rotation players last season.

The best way I can describe this New Mexico State Aggies team is hard-working. It goes without saying that when you bring in overlooked JUCO guys, they want to prove that they belong in Division I. They’ve got a tremendous backcourt to help lead them and a program that’s coming off an NCAA Tournament upset win over UConn. Sure, it might be a culture change, but the foundation is there for New Mexico State to continue its winning ways.