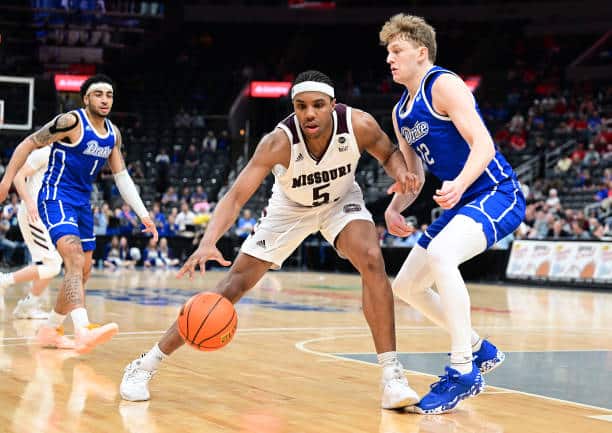 The Missouri State Bears bring in an almost entirely new squad but look to use that to fuel their season.

The countdown is officially on. For the second straight year, CBB Review has ranked the top 100 teams in college basketball heading into next season. Each day, we will reveal the next team, until we get to number one. Our number 97 ranked team is the Missouri State Bears.

Missouri State was able to finish last season with a 23-11 record and a 13-5 record in conference play, good for second place. Losing star Isiaih Mosley and second-leading scorer Gaige Prim leave a lot of openings for the Bears. They only return 3 players who logged minutes at all last season. However, head coach Dana Ford did a good job in the transfer portal landing the likes of Bryan Trimble and James Graham to hopefully reload for this season.

Donovan Clay was the 5th leading scorer on Missouri State last year, but with the top 4 leading scorers on the team all not returning, there is ample opportunity for Clay to become the leader of the team. He is a versatile forward that can score and facilitate well. He very well could be one of Missouri State’s top assist leaders at the end of the year.

Although he did not have a high usage rate last year, he had a higher one the previous two seasons at Valparaiso. Clay will have the ball in his hands a good amount this year, and his athleticism allows him to play above the rim at times.

The perimeter shooting will be important for Clay and Missouri State. His 3 point percentage last season rose to 31%, and he is looking to build on that more this season.

The Akron grad transfer looks to bring his scoring capabilities to Missouri State this season. With much of the scoring gone from last season, it will be much needed. Trimble is a scoring guard that has been a very good catch-and-shoot shooter in his career. He will get a lot of actions run off ball for him, and he will be the primary beneficiary of any drives that Missouri State may produce.

Analytic to Know: 21st in eFG%

Missouri State boasted one of the top 25 most efficient offenses last year, largely in part to having the 21st best eFG%. The loss of Mosley hurts a lot, but Dana Ford did a great job retooling on offense. He is also a very good coach that will be capable of figuring out how to best run the offense.

There are a lot of questions in the air about Missouri State. They come into the season relatively unknown, but they have a lot of guys who have stuff to prove. Transfers such as Dalen Ridgnal, James Graham, and Alston Mason will look to make their mark with expanded roles. Freshman Damien Mayo Jr. was a highly ranked 3 star that will look to make an impact early for this team.

It will be important for this team to mesh early and find their identity. They will have the opportunity to once again compete for an MVC championship and possibly get an NCAA tournament birth. If all breaks well, they will have a team that has some intriguing pieces at the guard and wing that will look to push the pace and score some points this season.