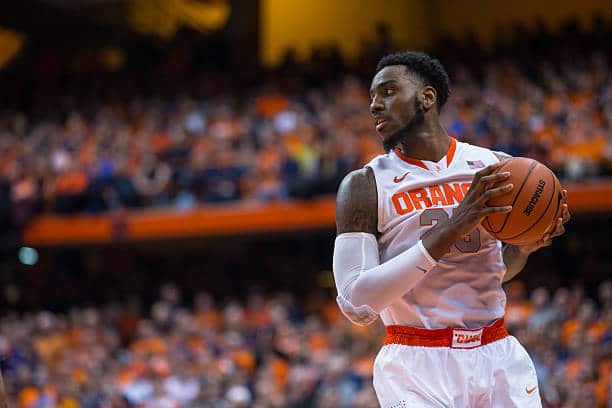 Boeheim’s Army looks to repeat as champions of The Basketball Tournament.

Syracuse loves their basketball, and that doesn’t stop short for The Basketball Tournament. Boeheim’s Army has been a constant every summer and finally got over the top, cutting down the nets in 2021. This year’s team looks a lot different than last, but they still have a talented bunch of former Orange and some others ready to repeat.

A stalwart and leader of Overseas Elite, Kennedy chose to join Boeheim’s Army last season, helping them capture their first TBT title. He’s a winner – a five-time TBT champ and showed up big for the Orange alumni team last season. Even though he might be a St. John’s alumnus, Kennedy fits in perfectly on Boeheim’s Army and will certainly use his leadership and talents to try and get his team to repeat and capture a sixth title in the process.

Ennis starred at Syracuse as a freshman – arguably the Orange’s top frosh since Carmelo Anthony. He makes his debut for Boeheim’s Army and will almost certainly be given the reigns as starting point guard for the team. Ennis last played in the NBA with the Los Angeles Lakers in 2018, averaging 4.1 points and 1.9 assists in 54 games. However, that was four years ago, so Orange fans will be excited to see if he can carry Boeheim’s Army all the way.

Like most years, Boeheim’s Army has a homecourt advantage and as big fan support as any other alumni-based team in TBT. This year’s roster does look different than past years. There’s no Eric Devendorf, as he joins the coaching staff, and there’s also no Malachi Richardson or Tyler Lydon, who both played on the squad last year, among others. But, it’s still a talented team that features three-point specialist Kyle Wiltjer and recent SU alum Marek Dolezaj. Rakeem Christmas should also serve as a dominant rebounder and inside scorer. They’ve got the assets to repeat, but chemistry is the biggest thing to watch for.