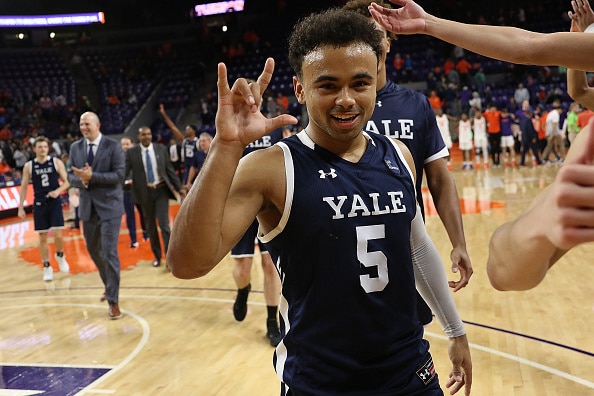 The Nerd Team will look to crunch the numbers and calculate the winning formula to receive the TBT prize.

The Nerd Team consists of players from the top academic institutions, and they’ve got a bunch of college studs on their team. Azar Swain is coming off a season where he scored 20 a game for Yale, and Tamaneng Choh was the Ivy League player of the year in 2020. You can’t forget Paul Atkinson and Prentis Hubb though, who were a key reason why Notre Dame was able to make a Round of 32 run last season.

You can go a lot of ways here but Atkinson is the most complete player on the team and can score, rebound, defend, and spread the floor as a forward. At 6’9, he posts good size and on a team that’s heavy with guards, Atkinson plays a good role.

Swain’s role on this team is to be a Marcus Keene-esque player. This means scoring early and often and that’s what he was able to do so well in college. Prentis Hubb plays the role of a facilitator, so Swain should get many opportunities, the question is whether he can emerge as one of the top guys or not. The team’s success relies a lot on this, and it’s up to him to deliver.

We are in the 64 team field heading to Syracuse, New York seeded as the 4th seed! We look forward to our second year in the TBT and what is in store… see you soon Syracuse 👀 pic.twitter.com/qRkYxFOsZh

The Nerd Team got a really unfortunate draw when they got potentially paired with Boeheim’s Army, the Syracuse Alumni team who won it all last year and will play in Syracuse this year in the second round if both teams win. This team is really good though, and they are extremely well-balanced meaning they are more than capable of pulling off the upset. They’ll need to get past Black & White first, the Bonnies alum who didn’t come here to lose in the first round.